Films that invite repeat viewings are my favorite. If the complexities of plot and character are authentic (and not simply incomprehensibility posing as profundity), each viewing unearths new pleasures and a deeper understanding of the film’s themes.
Robert Altman’s 3 Women is such a film, and it is, quite literally, a dream.
Altman claimed that much of the basic structure of this truly mesmerizing discourse on identity theft came to him in a dream, and there is little reason to doubt the assertion given that 3 Women unfolds in the same shifting rhythms and fluid, non-linear logic of a dream half-remembered.
Altman regular Shelley Duvall plays Millie Lammoreaux, the Palm Springs femme non-fatale of the Purple Sage Apartments: a garishly mauve modernist complex that looks to have sprouted out of the ground like a cactus flower in the flat, arid landscape of the desert. Millie is an attendant at a spa for the elderly and fancies herself an irresistible man-trap.


Oblivious to the fact that to most everyone she is either invisible or insufferable, Millie floats on a lemon-colored cloud of delusion fueled by romantic longing and women’s magazine clichés.
The lone dissenting voice is that of Pinky Rose (Sissy Spacek), the childlike, slightly spooky new spa employee who sees in Millie, “The most perfect person I’ve ever met.”

If Millie’s personality is overdetermined, Pinky’s is as unformed as an infant’s (she has so little in the way of history or possessions that she could be a visitor from another planet). But since she is the only person to ever reflect back to Millie her own image of herself, the two enter into a mutually advantageous roommate/friendship relationship that has the “worldly” Millie giving the unrefined Pinky lessons in life. Lessons she learns all too well, as it turns out.

The 3rd woman of the title is Willie (Janice Rule), the enormously pregnant, mostly silent artist who spends all of her time painting cryptic, luridly violent murals of anthropomorphic reptile people.

Willie is married to the hyper-macho Edgar (Robert Fortier), a swaggering, womanizing, former TV stunt double (“He knows Hugh O’Brian!”) with whom she shares ownership of The Purple Sage Apartments and the town’s lone hot-spot, Dodge City: a run-down, western-themed bar/ghost town where off-duty cops come to drink beer, shoot guns and ride dirt bikes.
It’s with the introduction of the almost spectral character of Willie that 3 Women begins to take shape as something grounded increasingly less in reality, yet something more chilling and unsettling than fantasy. As the ad copy on the poster read: “1 woman became 2, 2 women became 3, 3 women became 1.”


WHAT I LOVE ABOUT THIS FILM
This one is a true original. There is something so fascinating in Altman’s use of magic realism in exploring the twin phenomenon of personality and identity as things both contagious and fluid. He creates unique characters and a world that is real but jarringly off-kilter (not in that self-conscious, Cohen Brothers way, mercifully), and in the finely observed details, 3 Women is often heartbreakingly funny while being downright eerie.

What gets me about 3 Women is that no matter how unusual the characters, how off-rhythm their interactions, everything feels as if it comes from an emotional and human truth. The characters may be amplifications...their traits and behavior given a surreal, dreamy oddness...but in a weird way, it's that very quality that makes them come across more genuinely. It's as if you are watching people who have had their most hidden, inner selves, moved to the surface.
For example, no one has probably ever met a person as rabidly devoted to the "Cosmo Philosophy" of femininity or those loopy "Kraft Kitchen" home economist credos as Millie in real-life (at least I hope not); but her embodiment and complete faith in the "how to catch a man" propaganda women have been fed for generations, makes her character less an object of ridicule than someone we recognize and perhaps empathize with.

PERFORMANCES
Shelley Duvall gives one of the best performances of the 70s, and certainly what I consider the best of her career. She can take a character comprised almost exclusively of derisible (if not absurd) characteristics and finds the humanity within. Though audiences are encouraged to laugh at Millie’s ever-thwarted attempts at maintaining an air of sophisticated insouciance at all times (try as she might she can’t seem to prevent her flowing skirts from getting caught in her car door) one can’t help but feel empathy for her poignant quest to mean something to herself.

Sissy Spacek, an actress able to project earthiness or other-worldliness at will, is remarkable in a role that requires her to be an enigma, but not a blank slate. Her ability to convey a childlike innocence without coming across as mentally challenged is attributable to Spacek's questioning, She seems to be taking information in like a computer. I love her transformation(s). She has inhabited three distinct women by the film's conclusion.
Janice Rule really surprised me in 3 Women, because prior to this film I had only ever seen her in the truly atrocious Dean Martin Matt Helm film, The Ambushers -1967  (it's a Matt Helm film, did I really need to add the "atrocious" part?). If you ever want to see the definition of "reluctant sexpot," check out that film. Rule, decked out in a comic assortment of skimpy, mod outfits, is the glummest, saddest-looking sexist eye candy you've ever seen. In each scene, she looks as though she wishes she were anywhere else.
Given that as a first impression, I was pleased to see her in what appears a more comfortable environment as the most puzzling member of Altman's trio. The same solemn sadness so distracting in The Ambushers is present here, but to infinitely more satisfying effect.

THE STUFF OF FANTASY
The recurring motifs of water, mirrors, and other reflective surfaces give 3 Women a hallucinatory quality well-served by its haunting score and the flat, dried-out Palm Springs locations. The expansive emptiness of the land takes on the look of  Dali-esque dream landscapes.


For years Woody Allen has been knocking himself out superficially channeling Ingmar Bergman, and here Robert Altman hits a bullseye his first time out with this incontestably American nod to Bergman’s Persona.

I suppose what I've always related to in 3 Women is how it so poetically speaks to the need to connect and the basic, human desire to be acknowledged. Looking at the film through the eyes of the college kid I was when the film was released, I'm aware of what I shared with Millie: pretentiousness, the need for self-invention (or re-invention). Also, what I shared with Pinky: a fear of growing up and a wish to remain childlike; a longing to care for and be cared for by someone.
Watching the film now as an adult, I find myself stunned by the keenness of its observations and touched by how gently Altman treats these damaged characters. Ultimately, I find 3 Women to be one of Altman’s most humane works and, it remains after all these years, hands-down my favorite of all of his many excellent films. 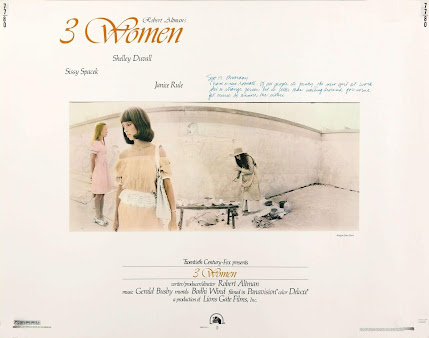