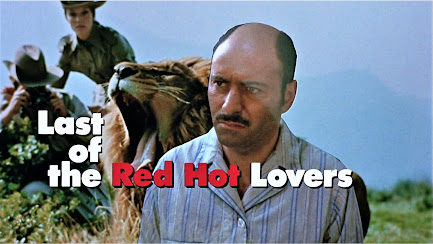 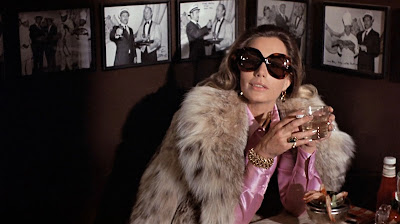 In her 2013 memoir, Sally Kellerman cited her performance in Last of the Red Hot Lovers as her proudest career accomplishment, which I’m in absolute agreement with. Reminding me of one of those silent wives in a Martin Scorsese mob movie, Kellerman’s hard-edged Elaine Navazio is a standout and my favorite performance of her career. The writing in this sequence is perhaps the tightest and funniest, and Kellerman has a great comedy rhythm with Arkin (the two would team again in 1975’s Rafferty and the Gold Dust Twins).
What hasn’t been as obvious to me until multiple revisits is how hilariously in character Arkin’s underplaying is. His performance is infused with dozens of small bits of business (the running gag of his non-drinker’s reaction to drinking, for example) that not only set up and support Kellerman’s jokes beautifully, but nicely establish Barney’s behavioral details that have their payoff in latter sequences reflecting his evolution as a red hot lover.
LOVE AND THE ACTRESS
The first playlet ended with Barney emphatically vowing “I will never, never, never do that again.” In this chapter, which stands as the requisite “silly” episode in Neil Simon’s 3-act formula (remember that passed-out hooker storyline in California Suite?) we learn that “never’ for Barney is about six months. It’s summer, and having shed his romantic illusions along with his winter suit, Barney is again inspired to entertain a young woman in his mother’s apartment. This time it’s Bobbi Michele (Prentiss) the “theatrically built” actress-singer he meets in the park.
From Barney’s outside-looking-in perspective on the sexual revolution, Bobbi represents all those beautiful, long-legged, mini-skirted, sexually-uninhibited women Barney sees and fantasizes about on the streets and staring out at him from the covers of sexy magazines. That she turns out to be Grade-A Looney Tunes turns their afternoon into a “be careful what you wish for” male midlife-crisis cautionary tale. 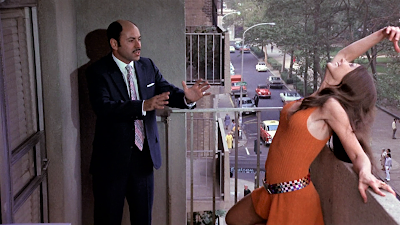 I’m a huge admirer of the woefully underappreciated Paula Prentiss so I feign no objectivity when I say she’s hysterically funny in this essentially made-to-order role. Not a popular performance even among many of her fans, I find her to be brilliant. No one does kooky-sexy like Prentiss, her distinctive delivery and impeccable timing working to make the comedy in this sequence feel almost absurdist.
LOVE AND THE TIMES WE LIVE IN
In this final installment, Last of the Red Hot Lovers gets a bit serious. A family friend whose husband is having an affair (Taylor) plummets into a deep depression and solicits the by-now practically predatory Barney for an ill-advised revenge dalliance. In the course of trying to seduce the woman after she’s already expressed she’s having second thoughts, Barney has a Willy Loman moment where he’s confronted with his moral hypocrisy and the very real possibility that he may not be the decent man he prides himself on being. In the midst of this, the film seems to make the questionable (but no doubt comforting) leap that before the sexual revolution introduced so many gray areas, America was a bastion of heterosexual monogamy. Conveniently ignoring the decades of smutty sex comedies (some written by Simon himself) satirizing the morality of suburban bed-hopping.
In later years, Neil Simon would get better at balancing the whole comedy-drama thing. But this third act episode, which has Simon’s characters dealing with some pretty hard-hitting truths, is somehow written to be the broadest, most farcical sequence of them all. 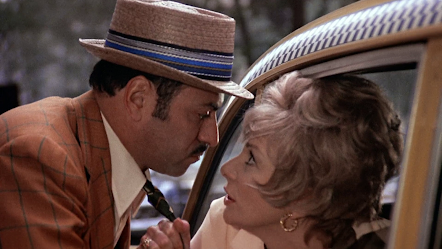 Perhaps on stage, it came off better. But with the intimacy of the movie screen, the skill of Renee Taylor's performance only emphasizes the sequence’s whiplash shifts in tone. (Taylor is superb. How she manages to be screamingly funny one minute and heart-breakingly real the next is remarkable.) Does it make me laugh? Yes. Between the running gags of Jeanette's handbag and her retreats to the coffee shop, it has me in stitches. Does it work? Intermittently I’d say.
Once again I call attention to how good Alan Arkin is, and in this sequence, he has to work with coming off as kind of creepy and unsympathetic. But both actors redeem the shortcomings of the material through the authenticity of their characterizations.
As a journalist noted at the time, Last of the Red Hot Lovers is a sad comedy about a real cultural phenomenon of the time: the youthquake era was the first time adults didn't look to their elders for guidance on how to live their lives, they looked to the young.
It's hard to know what being middle-aged must have felt like at a time when so much of life around you seemed to be in flux for only the young, but everyone can relate to feeling left out, feeling as though you're missing out, or that the parade is passing by. With Last of the Red Hot Lovers, Neil Simon takes a witty and insightful stab at exploring the experience of a character who had to go too far to learn that being in the middle wasn't so bad.
BONUS MATERIAL
I really love the look of Sally Kellerman's Elaine in Last of the Red Hot Lovers. Especially her enormous fur coat. As character-defining costuming goes, the lynx fur coat worked overtime in the '60s and '70s. I don't know if they ever went through a phase when they were considered sincerely chic or glamorous, but when a character is sporting one in a movie, it always seems to serve as a signifier of a certain kind of brassy, East Coast vulgarity. Living in California, I don't think I've ever seen one in person, but my first screen lynx sighting was in 1967's Wait Until Dark when it was worn by street-savvy heroin smuggler Samantha Jones (bottom). Next, in 1970s The Owl and the Pussycat, Barbra Streisand's model/actress wore her omnipresent faux fur coat like it was sex-worker armor.
The recent death of actress Sally Kellerman is what inspired me to re-watch Last of the Red Hot Lovers. In her 2013 memoir Read My Lips, she cites her performance in the film as one of her proudest accomplishments, and I can't help but agree. The first thing I ever saw Kellerman in was an episode of the Marlo Thomas sitcom That Girl titled "Break a Leg." It was broadcast Thursday, November 10, 1966, and it made an impression on me because I had a 4th-grade teacher I had a crush on who looked just like Kellerman in this episode. Although her most famous role (Margaret "Hot Lips" Houlihan) is from a film I really can't stand (Robert Altman's M*A*S*H), I loved Sally Kellerman in Rafferty and the Gold Dust Twins (1975), Slither (1973), Foxes (1980), Brewster McCloud (1970), and even 1973's  Lost Horizon.
Copyright © Ken Anderson   2009 - 2022
Posted by Ken Anderson at 2:13 PM 18 comments: