It’s not my intention to turn this blog into a celebration of the worst that cinema has to offer (although there are those who would say I already have), but the recent DVD release of the notorious 1973 mega-flop, Lost Horizon, is an event of considerable note. A cause for celebration, if you will, for both lovers of entertainingly bad cinema (yours truly), and those who have come to regard Lost Horizon as an underappreciated classic.

Lost Horizon, James Hilton’s paean to peace and spiritual life everlasting in a magical land called Shangri-La, was first adapted to film by Frank Capra in 1937. Thirty-five years later, MOR pop sensations Burt Bacharach and Hal David were hired by producer Ross Hunter to score this big-budget, semi all-star, musical remake. Alas, Lost Horizon fell prey to the prevailing twisted logic of the day which held that what modern musicals needed most was dramatic talent, so, Columbia Pictures, not having learned its lesson from Camelot (whose revamped set serves a Shangri-La’s lamasery), populated Lost Horizon with a cast of dramatic actors who could neither sing nor dance. 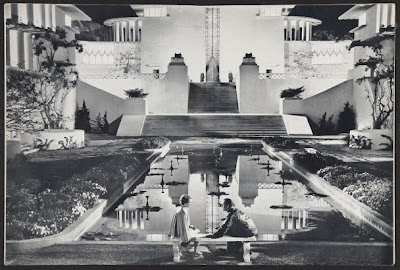 Really? This is 35 years of film progress?: Above, Shangri-La envisioned as a Streamline Moderne paradise in the1937 film; below, Shangri-La as a Las Vegas theme hotel.

To promote Lost Horizon, Ross Hunter—the comb-overed, leisure-suited, closeted-gay producer (his 40-years lifetime partner was frequent co-producer Jacque Mapes) responsible for the Tammy films, Douglas Sirk, and those Rock Hudson/Doris Day comedies—appeared in a flurry of self-congratulatory, back-slapping, print and television publicity declaring how proud he was of Lost Horizon, and how (in a subtle slap in the face to the new permissiveness in films) his musical was to be a return to the wholesome family films of yesteryear.

Hunter, who had reason to crow, coming as he did off of the staggering blockbuster success of Airport (1970), was about to get a none-too-subtle dose of hubris when critics and audiences nationwide met the release of Lost Horizon with a conjoined hostility that effectively ended his 20-plus years as a feature film producer. Had Hunter been a little less "proud" of Lost Horizon, he may have emerged from the fiasco reasonably unscathed. Unfortunately (but rather helpfully), Ross Hunter chose to plaster his name in large type above the film's title in any and all publicity, making it easy for everyone to know just where and with whom to place the blame.


Following much advance hoopla, when ultimately released, Lost Horizon (which provided Norwegian art-house sensation, Liv Ullmann, her ignominious American film debut) had the dubious distinction of being one of the most heavily-promoted, yet widely-reviled films of the '70s. A title it may well have held in perpetuity had it not been for the twin-missile launch of two equally high-profile musical bombs later in the decade: At Long Last Love (1975) and The Blue Bird (1976).

Even with the excision of several laugh-inducing musical numbers, Lost Horizon limped along at theaters before disappearing completely within weeks of opening. Soundtrack albums and truckloads of Lost Horizon merchandising items (comic books, paper dolls, etc.) filled the remainder bins. Denied a VHS release and airing on cable TV only in its severely edited-down form, Lost Horizon, a film otherwise destined for obscurity, has over the years risen to must-see status primarily due to its long-standing unavailability and a lingering public curiosity surrounding it actually being as awful as its reputation attested.

Now, for the first time since that calamitous opening week in 1973, the curious and devout alike can witness Lost Horizon in all its fully restored, digitally enhanced, wide-screen splendor, with all but one of its five deleted musical numbers reinstated (a brief Sally Kellerman/George Kennedy reprise of "Living Together, Growing Together" is still MIA). Sure, the recovery of lost footage from Lost Horizon is a bit like a Bizarro World reenactment of the restorations of Stroheim's Greed or Lang's Metropolis; but it’s rare for a studio to treat one of its money-losing embarrassments with such respect.

Although I am very fond of Lost Horizon and have seen it many times, I don't number myself among those who actually think it’s a good film. I like it because of the nostalgia it invokes (the pro-Lost Horizon cult is comprised chiefly of individuals who saw it as children. Bless their undiscerning little hearts); my love of Burt Bacharach; and because I have a decided taste for cheese. Lost Horizon is a banquet of tacky aesthetics, risible dialog, awkward performances, wince-inducing lyrics, and moldy choreography. And I wouldn't have it any other way. Movies this wrong-headed are just too much fun.

As with many bad films that provide hours of unintentional entertainment, Lost Horizon’s cluelessness is one of its primary charms. It's just so darn earnest! Fairly dripping with good intentions, EST seminar philosophizing, and Me Generation navel-gazing; Lost Horizon intends to be moving and inspirational, but in never adequately landing on a way of dramatizing its themes, the film talks about them instead (ad nauseum) and in turn feels needlessly preachy. For example: Lost Horizon never makes Shangri-La look particularly appealing. It's actually like a well-appointed rest-home. Seriously, the state of peace and enlightenment HAS to be livelier and more fun than this. With all those monks somnambulistically gliding about and everybody looking so gloomily content, the idea of an eternity spent here sounds less like a dream and more like one of those ironic twist endings from a Twilight Zone episode.

If there’s such a thing as the opposite of “The Midas Touch,” then the late Ross Hunter certainly had it when it came to natural beauty. In Airport, Hunter’s old-fashioned notion of glamour turned 32-year-old stunner Jean Seberg into a well-preserved matron. And in Lost Horizon he works the same reverse alchemy on the luminous Liv Ullmann. The stiff, desexed, schoolmarm Lost Horizon fashions her into bears no resemblance to the lovely, earthy actress in all those Ingmar Bergman films.


Sally Kellerman, though ill-served by the terrible script and a few too many giggle-worthy dance moments, is my personal favorite in Lost Horizon. Perhaps it's the character arc that takes her from pill-popping neurotic to loose-limbed free spirit, or the fact that when she sings she at least sounds like herself (the soulless, antiseptic singing voices given to Finch and Ullman could have come out of a machine). Mostly it's because there's a naturalness to her that I've always found very appealing. Unlike some of her costars who look only embarrassed, one senses that Kellerman liked her role, enjoys singing, and perhaps envisioned herself appearing in a better musical than the one she's actually in.

THE STUFF OF FANTASY
The Holy Grail of lost footage for those with an affinity for the awful has been the infamous "fertility dance" sequence of the "Living Together, Growing Together" number. Legend has it that this sequence, highlighting greased-up male dancers in loincloths, caused so much audience laughter that it was removed from the film during it's opening week. The choreography in this number is hilarious, to be sure, but some of that laughter HAD to have been homosexual panic. After all, there have been hundreds of films with equally atrocious harem-girl dance sequences shoehorned into the plot for the sole purpose of displaying a little female pulchritude. But I guess a big screen filled with gyrating, muscular, semi-nude male dancers was just too much to ask of audiences in 1973. Both confounding and fascinating, it stands alone as the sole moment of an asserted homosexual sensibility in a strenuously heterosexual "family" entertainment created by a coterie of gay men (the aforementioned Hunter and co-producer Mapes; 63-year-old choreographer Hermes Pan; and screenwriter Larry Kramer).

THE STUFF OF DREAMS
When it comes to Lost Horizon, I think American audiences betrayed Ross Hunter by acting like they expected something other than vulgar schlock from him (after all, he had been feeding them just that for 20 years). But I also think Hunter betrayed American audiences by falling prey to that great sickness: mistaking success for talent.

Airport was a wildly popular film, but, no offense to fans, just add a few Bacharach songs and lead-footed dances and its every bit as awful as Lost Horizon. But since it was the biggest grosser of the year and garnered Ross Hunter his first and only Academy Award® nomination, it was inevitable that he wouldn't just see this as a case of giving the public what they wanted (like a fast-food burger), but evidence of his talent. The thing that sinks Lost Horizon is that it just takes itself too seriously and tries too hard to be an important film. When Hunter was content to make glossy, easily-digestible, escapist fluff, he was perhaps the top of his craft. When he actually started to see himself as a messenger of spiritual uplift...well, delusion crept in, held the door open for pretension, and they both kicked Hunter in the pants.

We film fans are susceptible to our own variation of this sickness. If we like a film, we flatter ourselves by thinking it's because it is an unequivocally good film. If we don't like a film, it obviously has to be because the movie is bad. Closer to the truth is that we each like what we like, then we try to attach objective value judgments to our subjective opinions, This kind of thinking ignores the very real fact that some truly marvelous films are just not to our taste, and some real stinkers are dear to our hearts. Such is Lost Horizon to me. It's not a good film, but boy, was I excited when I learned that it was coming out on DVD!

THE AUTOGRAPH FILES
Below are autographs collected from Michael York and Ross Hunter in 1980. They were patrons at a book store I used to work at on Sunset Blvd in Los Angeles. 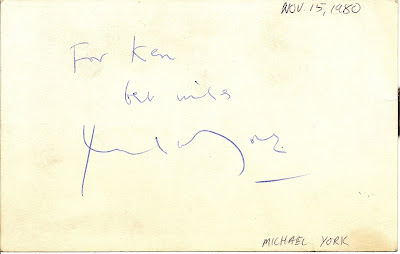 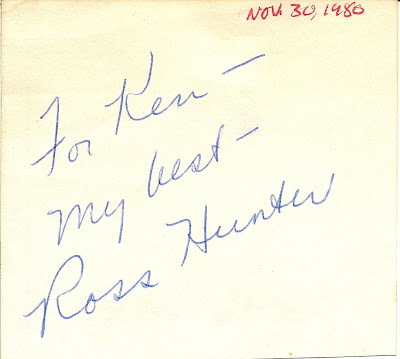