The 1968 West Side Story re-release was shown minus the overture and intermission of its 1961 roadshow engagements, but it was presented in breathtaking widescreen (a welcome change from our 20-inch B&W console TV), eye-popping color (growing up seeing 95% of all entertainments in grayscale, a bigger thrill than you might think), and with stereo sound that fairly lifted me out of my seat. But none of these things would have mattered if the film they buttressed hadn’t measured up to the fanfare. And on that score, West Side Story fairly blew the roof off the Castro Theater that night.

A phenomenal film experience, West Side Story was like nothing I’d ever seen (granted, at 11, the list of things I'd never seen was pretty extensive, but you get my point). I couldn't think of any movies I'd seen that looked even remotely like West Side Story. From that astounding 8-minute Prologue that sets the stage and establishes the film's stylized realism and visual vocabulary of saturated colors, to the vivid elegance of its cinematography and evocative use of music, it was obvious from West Side Story's jaw-dropping first frames (those aerial views of New York!) that it was a breed apart from the kind of musicals being turned into films at the time (Bells Are Ringing, Flower Drum Song, The Music Man). Even its innovative score…classical, operatic, jazzy...one unforgettable song after another--didn’t sound much like the other musicals (Bye Bye Birdie, The Sound of Music).

And the dancing. Had there ever been such engagingly witty, extraordinarily exhilarating dance sequences? Electrifying ensemble dance numbers that were genuine showstoppers, not because of empty spectacle, but because dance, music, cinematography, and editing were in simultaneous, seamless service to character, emotion, and the dramatic flow of the narrative. In the large-scare numbers, every dancer is doing more than dancing...they're acting, they're revealing character, they're giving a performance. There's so much detail to take in and so much "business" going on in every corner of the frame, it feels like this 1961 movie was made for the digital age of the freeze-frame. To watch the way Rita Moreno and George Chakiris look at each other when they dance is to learn everything you need to know about the relationship between Anita and Bernardo.
I’ve recounted in earlier essays how averse to age-appropriate movies I was when I was young. That's how I missed out on seeing Funny Girl, The Sound of Music, and Mary Poppins...I thought they were all "kiddie movies" or worse, movies deemed  “fun for the whole family.” West Side Story won my heart in no small part due to it being a grown-up musical. Grown-up by ‘60s movie musical standards, anyway. The film was pretty dated and tame in some ways. I mean, the Jets—direct descendants of The Bowery Boys and Dead End Kids who pronounced “world” as “woild” and spoke in the colorful bop-slang patois of those low-budget ‘50s juvenile delinquent movies my sisters and I devoured on Saturday afternoon TV (“Daddy-o!”)—were harmless hoodlums. (The Jets' cartoonishness had the perhaps intentional effect of softening the distastefulness of their "Make The West Side Great Again" racism.)
But this was also a movie, a musical, no less, that was critical of what was wrong with American society and referenced mature themes like racism, drugs, poverty, gang violence, prostitution, rape, and police corruption. It even had good-girl Natalie Wood having sex without benefit of marriage (although I admit, at the time, I thought Maria and Tony had just spent the night cuddling).
Speaking of things I'd never seen before, gay Ken, whom I hadn't yet been properly introduced to, never saw ANYTHING like George Chakiris. I don’t quite know what I did with the feelings aroused by the sight of Bernardo in that purple shirt and skinny tie, but I suspect they were tucked away in the same place I put my unconscious identification with/recognition of the queer-coded character of Baby John.
(Ask Anybodys: For those who don't know, the creators of West Side Story - Laurents, Bernstein, Sondheim, and Robbins - were all gay or bisexual men in various stages of closeted/denial. Too bad at least one of them wasn't also Puerto Rican.)
My earlier use of the word "dated" wasn't intended as a pejorative. As it relates to my impression of West Side Story as a product of the past, a film reflecting the perspective, aesthetics, and concerns (and occasional cluelessness) of a very distinct point in time, I see it as one of West Side Story's strengths. The same way I would mean it if I referred to the films of Fred Astaire and many of the classic MGM musicals as dated. They are of the time they were created and reflect a kind of past urgency or vitality that can't be wrested into another era.
West Side Story being behind-the-times in some aspects (while simultaneously raising and setting the bar of innovation in others) lends the film an air of parable or fairy tale. Its themes are rooted in realism, but the world depicted is very different from reality.
The world had changed a great deal between the time West Side Story first appeared on screens and the time I saw it. It wasn't a seven-year gap, it was a lifetime. Even as a kid I thought the film's depiction of a world where restless youths (just how the hell old  ARE the Jets and Sharks supposed to be?) blew off steam by having turf wars and zip-gun rumbles seemed as remote as Neverland when contrasted with the what young people were dealing with in 1968: Two political assassinations in 1968 alone, race riots, the Vietnam War, police brutality, campus protests.
Yet the film still spoke to me. And I think that's because the things it talks about (even in its clumsy '50s jargon) is still real for young people. And it has been since the days of Romeo and Juliet.
Looking back, I feel so lucky to have seen West Side Story for the first time with no idea of its significance, no sense of its legacy, and no prior exposure to its music (I HAD heard the lilting "I Feel Pretty" on some variety show, and was so surprised to learn it came from this show). I’ve never forgotten what it was like experiencing this innovative, visually dazzling, and highly entertaining musical as a journey of complete discovery. I was taken on a real emotional roller coaster that night, from the ecstasy heights of those fabulous numbers to that ending that gave me major waterworks (I think you always cry harder in movies if you see your mom is crying, too) everything came together so beautifully. West Side Story was without a doubt a most extraordinary movie experience.
I Saw You and The World Went Away 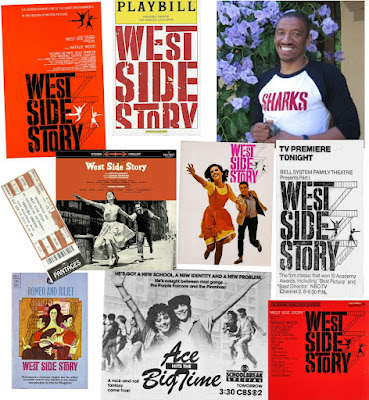 West Side Story remained an ongoing passion and fan favorite for lo these many years. The visual aid purpose of this collage is to show not only how much fun I had being a West Side Story fan, but also illustrate how I came to reach such an oversaturation point. And if you're wondering about that TV Guide ad at the bottom that has nothing to do with West Side Story, let me put it this way... there's a reason I say dreams are what the cinema is for.
The year 1985 (five years after the movie Xanadu inspired me to study dance) found me on a cordoned-off city block in Los Angeles--folks watching from behind barriers, massive speakers blaring musical playback, a camera on a crane---dancing as a member of a terpsichorean street gang in a West Side Story-inspired musical fantasy sequence for a CBS Schoolbreak Special: Ace Hits the Big Time.
The hilariously cheesy number was more nightmare than dream sequence, and my dancing in it didn't give George Chakiris any sleepless nights, but for that entire day I felt as though it wasn't really happening...that it was all a fantasy playing out in the head of  11-year-old Ken sitting in the balcony of the Castro movie theater.
Gee, Officer Krupke
WEST SIDE STORY INFLUENCE & INSPIRATION 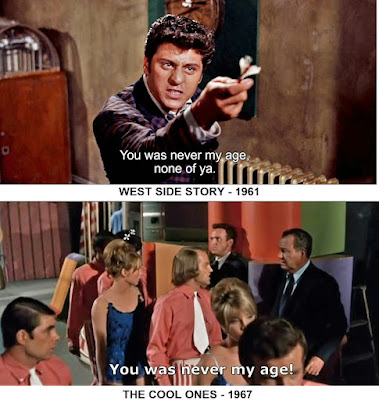 (Top - Tony Mordente as Action). This quotable admonition, in addition to the Jets' stare-down, finger-snapping response to authority figures, found its way into the 1967 teen musical The Cool Ones, choreographed by West Side Story's David Winters (A-rab). 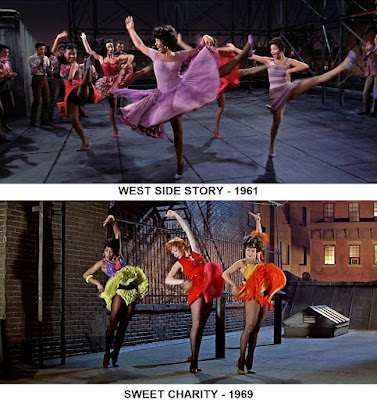 Critics couldn't make up their minds as to whether Bob Fosse's rooftop staging of "There's Gotta Be Something Better Than This" in Sweet Charity was a skirt-flipping homage or blatant rip-off. The same with his decision to stage the "Rhythm of Life" number in a subterranean parking structure (a la West Side Story's "Cool"). 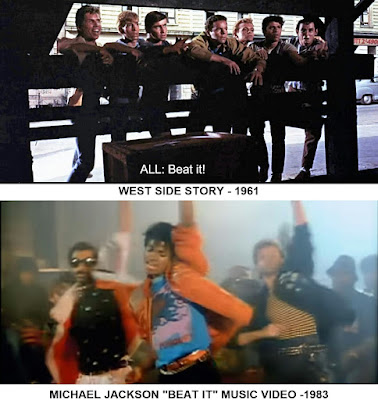 It's not unusual for artists to be unfamiliar with the trailblazers and innovators in their field. Indeed, in many cases, ignorance behooves the young artist, lest they find out their trumpeted originality is often just history repeating (see: Lady Gaga, Bette Midler, and a singing mermaid named Delores DeLago).
But director Bob Giraldi's persistent claim that his music video for Beat It (featuring dancing rival street gangs - complete with singer-snaps and a choreographed rumble) was not influenced by West Side Story is both laughably unconvincing and blatantly disingenuous. And (the most likely option) the kind of cagey deception one engages in to sidestep potential legal hassles.
In any event, Rita Moreno once relayed in an interview how Michael Jackson approached her at a social function and proclaimed to be such a huge West Side Story fan that the film inspired the song, concept, and choreography of the music video.
BONUS MATERIAL

I promised myself that I wasn't going to post this somewhat overworked image, but I have to concede that there's a very good reason for its popularity. The tenement backdrop, the natural light, the low camera angle (accomplished by digging a pit in the asphalt), and the graceful athleticism of the dancers as they execute a grand battement à la seconde in relevé...is pure visual poetry. With their faces lifted to the sun and their bodies literally rising above their gritty reality, this image perfectly captures the aspirational spirit that is the essence of West Side Story's "Somewhere."
Copyright © Ken Anderson  2009 - 2021
Posted by Ken Anderson at 4:35 AM 19 comments: