Despite pretensions to the contrary, this man can’t live by serious, thoughtful films alone. More often than I’d like to admit, my soul cries out for movies that appeal to my aesthetic sweet tooth. These are films of wholly superficial appeal, totally devoid of substance, which nonetheless number among my favorite, most re-watched DVDs. They are often films that broadcast (if not flaunt) their artifice in every frame. Glamorous, glossily art-decorated worlds populated by beautifully lacquered denizens known as movie stars. Openly and lavishly synthetic, these films transport me to a time when going to the movies was like entering a waking dream.

A particular favorite of mine is the 1967 psychedelic spy spoof, Casino Royale; a film that required the participation of five directors, at least nine writers, and over 12-million- dollars to become a convoluted, barely coherent, sixties happening. Disjointed, nonsensical and never-as-funny-as-it-thinks-it-is, Casino Royale is nevertheless a candy-colored, mini-skirted, jewel box of a film that is really a lot of escapist fun if you surrender yourself to its loopy, druggy non-reality. Released during the overkill phase of 60s spy-mania, Casino Royale has the stylish, over-the-top, gadget-heavy look of a serious James Bond film (and some of the action sequences, particularly a early car chase scene, are very well done), but given that TVs Get Smart had been poking fun of the spy genre since 1965 - with considerably more laughs - much of what may have seemed like fresh targets when the screenplay was written, felt old-hat by the time it reached the screen.
The stars of Casino Royale are a multinational horn-of-plenty. There's David Niven, Peter Sellers, Ursula Andress, Orson Welles, Woody Allen and Joanna Pettet...and that's just for starters.

The plot, such as it is, involves the original, knighted James Bond (Niven in starchy British mode) being forced out of retirement when SMERSH takes to utilizing beautiful female spies to strike at the oversexed heart of Her Majesty's Finest. To combat this evil, Sir James does just what anyone else would do under the circumstances; he assembles an army of sexually irresistible male and female agents and bestows upon each the name of James Bond 007.  Ok….
To keep questions concerning logic at bay (and there are many), Casino Royale wisely distracts with ceaseless scenes of gunplay, car chases, karate battles and very photogenic explosions, while throwing beautiful starlets and cameo guest stars at the screen at regular intervals. Look!...there’s William Holden and drinking pal John Houston! Look!...there’s George Raft flipping a coin! Look!...there's Jean Paul Belmondo being all French and everything! Listen...that’s someone else’s voice coming out of Jacqueline Bisset’s mouth! It all happens so fast and with so little connection to what else is going on, it’s a little like watching a celebrity flip-book, but somehow it all seems to come together.


WHAT I LOVE ABOUT THIS FILM
I'm unable to separate Casino Royale from its musical score. The two are one in the same. To listen to the soundtrack album is virtually like experiencing the film. Scored by the then untouchable Burt Bacharach, I don’t think there’s a musical score out there better suited to a movie. From the classic title tune (Herb Alpert so seriously nails this song it FLOORS me!) that simultaneously spoofs and pays tribute to the great John Barry James Bond themes, Bacharach’s indubitably-60s yet-timeless score is really the best of his career. A Columbia Record Club selection of the month back in 1967, I wore out the stylus endlessly replaying this lp. More than 40 years later, it still sounds just as groovy. 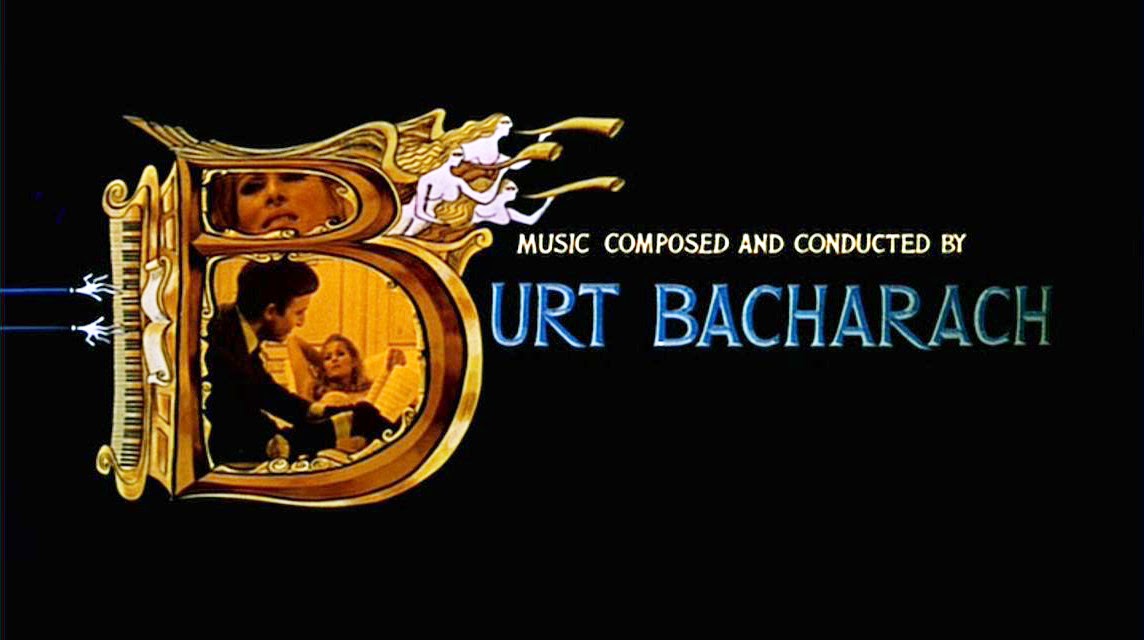 PERFORMANCES
David Niven, Peter Sellers and Woody Allen are all great, but nothing they do here is markedly different from what you’ve seen them do in countless other films. The big surprise for me is the gorgeous Joanna Pettet. As Mata Bond, the illegitimate daughter of Mata Hari and you-know-who, Pettet shows a surprising flair for comedy light years away from her serious work in The Group (1966). Making the most of a comically cockney accent which she later trades in for finishing-school posh, Pettet exudes so much freshness and sexy star quality that one wishes she had worked more.

For the most part, the elder members of the cast coast along on a kind of game good will. You're less impressed by their performances than you are by their being such good sports about taking part in such silliness. The younger players, for the most part, barely make any impression at all, what with having to compete with space ships, Frankenstein monsters, and seriously eye-popping art direction.

THE STUFF OF FANTASY
The women in Casino Royale are all major foxes. Just gorgeous. This in spite of (or because of) the outrageous extremes of late-60s high-fashion and makeup tended to make women look like glamorous drag queens. The hairstyles and costumes on display in this film would make Lady Gaga weep with joy.

Ursula Andress (she of the aristocratic forehead) looks like a goddess and is photographed accordingly, but my personal favorite is the darkly exotic Daliah Lavi. They sure don’t make 'em like her anymore. Graceful and sexy with helmet hair and a smoky voice, she is a special effect all unto herself.

And, as this was the late '60s, the boom era of pop-arty, futuristic, and mod fashion, Casino Royale doesn't disappoint in showcasing what must have been an enormous costume budget. Iconic designer Paco Rabanne contributes metallic Roman-inspired military wear, but elsewhere you'll see what looks to be the entire '60s fashion catalog parade before your very eyes.


THE STUFF OF DREAMS
I just love everything about how this film looks. Casino Royale is like a natural history museum exhibit of the best and worst of the most ostentatious pop fads of the '60s. The space-glam costumes, the enormous hairstyles, the futuristic sets, the plastic Playboy magazine sexuality. Everything is amped up to surreal levels of overstatement and the result borders on the epic. The directors and writers may not have known what they were doing, but the production designer, art director and costume designers all hit home runs.

The behind-the-scenes troubles in the making of Casino Royale are legendary (Sellers was fired/quit before filming was completed, scenes were written and filmed with no knowledge of what other directors were doing, last minute rewrites, money thrown away on sets and sequences never filmed, etc.) and contribute to its scrambled narrative. It's rather something of a miracle that anyone was able to assemble even a remotely coherent film from the acres of footage shot. That the film proved a modest success at all has a lot to do with the timbre of the times: movies that made no sense were becoming all the rage.
Casino Royale, like Barbarella, Myra Breckinridge, and The Magic Christian, was fashioned as a "head film": a movie that either courted young, college-age audiences by attempting to cinematically replicate the psychedelic drug experience, or one that was best appreciated in an altered mind state. As it was also a film fashioned largely by middle-aged men, Casino Royale may have looked very hip, but was VERY old-fashioned in almost every department.
None of this was obvious to me when I first saw Casino Royale at age ten at the Embassy Theater in San Francisco. All I knew then was that the film looked like a live-action cartoon. Today when I look at it, its kaleidoscopic charms come back as vividly to me as they did then. As for it being a "head film," I guess I can't argue with that, after all, Casino Royale is definitely the kind of movie I enjoy much more when I keep my brain out of it entirely.