I saw Barbarella for the first time in 1968 at the age of eleven (I know, what was my mother thinking?) and for years it remained this extraordinary little gem of a film that no one else seemed to appreciate. I saw it so many times that it came to signify one-third of the cinema trifecta that cemented my lifelong love affair with the movies (the other two being Rosemary’s Baby and Casino Royale…the cool one with the Bacharach score).
In the ensuing years, fashion designers, photographers, and pop stars too numerous to mention borrowed from it so extensively that it has become a mainstream/cult hit. To my unending chagrin, the many delights of Barbarella that once spoke exclusively to me are now superficially embraced (and largely misinterpreted) by text-addicted teens and iPhone-addled adults in suburban home theaters across the nation. To clarify, I don’t know if I mind Barbarella reaching a broader audience so much as I mind a movie of such exuberant creativity being saddled with the dull and lazy classification of “camp.”
Made at a time when the chief pop-cultural preoccupations were space, spies, sex, and rebellion, Barbarella was an intentional pop-art put-on. A sci-fi comic book take on drugs, un-sexy sex, and fashion as fetish. It may not be exactly what the '60s looked like, but to a sheltered, Catholic pre-teen, Barbarella is PRECISELY what the '60s felt like.

WHAT I LOVE ABOUT THIS FILM
Enticed by posters and TV ads that enthusiastically beckoned, “See Barbarella Do Her Thing!” I went to see Barbarella with little knowledge of what to expect. You can imagine my thrill and delight when, within the film’s first two minutes, I discovered that Barbarella’s “thing” involved performing a zero-gravity striptease while a tres-groovy theme song rhymed Barbarella with Psychedella on the soundtrack. WOW!
The image of the almost impossibly beautiful Jane Fonda floating naked around a fur-lined spaceship while animated credits none-too-successfully concealed her nudity was a vision that burned a hole in my retinas and remained tattooed on my psyche ever since.

PERFORMANCES
In a career of so many memorable and challenging roles, it must pain Jane Fonda to know that one of her most assured screen performances was in a film she spent the better part of the 1970s trying to live down. But really, she has nothing to be ashamed of. Years of appearing in bubble-headed Hollywood sex comedies prepared her well for the wide-eyed hijinx of this five-star, double-rated, astro-navigatrix. Along with most of her body, Fonda as Barbarella displays an intelligence and winning comic timing that makes clear that she carries the entire film (plus several pounds of hair) on her shoulders.

THE STUFF OF FANTASY
The sequence where the angel Pygar flies Barbarella to the evil city of Sogo is a Frazetta illustration come to life. Though the special effects are primitive, the sequence has a vitality and sense of fun that is a stellar example of the kind of magic that movies do best.

THE STUFF OF DREAMS
Barbarella is one of those films that is so visually way out that you could enjoy it just as much without sound. The wonderful Lava-Lamp production design by Mario Garbuglia and iconic futuristic costumes by Jacques Fonteray & Paco Rabanne display a great deal more ingenuity and wit than the script.
By any serious standard of what makes a good film, Barbarella falls short. But with the passage of time, many “good” films have proven unwatchable (Seen Chariots of Fire lately?), while many films dismissed at the time of their original release have gone on to become classics (The Wizard of Oz, Citizen Kane).
By no stretch of the imagination is Barbarella a classic (well, it IS a classic of sorts) but classic films do share one thing…they endure by having created a kind of perfect reality within the framework of their narrative.
And in this, Barbarella is a film that looks better the older it gets.
Ruminating on the druggy 1980s and the part it played in the jumble that was ultimately the film Xanadu, playwright Douglas Carter Beane said, “When you watch ‘Xanadu,’ you can see the cocaine on the screen.”
Well, a 60s variation of the same can be said for Barbarella. Some serious mind-expanding drugs had to have been behind what’s on display here. A fur-lined spaceship that looks like a flying Avon compact, blind angels, murderous dolls, orchid-eating exiles, killer canaries, a sex machine (no, not James Brown), a giant hookah in which swims a semi-naked man …it never stops!

Sure, by today's standards Barbarella's special effects are almost comically primitive (Pygar's flying is more like wind-blown dangling), but it ultimately turns out to be part of the film's charm. For 1968, this stuff was a considerable step above most of the kind of cheapie sci-fi films I grew up on, so I was enthralled.  I love movies that transport me, surprise me, and render the fantastic tangible. Every time I watch Barbarella it reintroduces me to that kid-like part of me that can still be left thunderstruck by movie magic.

Barbarella and the evil Great Tyrant (Anita Pallenberg) are rescued from the burning city of Sogo by the blind angel Pygar (John Phillip Law). When Barbarella asks why he's saving the very woman who tried to have him killed, Pygar replies, "An angel has no memory!"

THE AUTOGRAPH FILES
Jane Fonda signed this for me on May 6, 1976, when she came to Sacramento City College to make a speech on behalf of her then-husband, Tom Hayden. I wasn't a student but I knew I couldn't pass up a chance to meet THE Barbarella in the flesh. I remember zippo of her speech, but I do recall that when I managed to catch her before she was being whisked away in a VW bug driven by an aide, she kindly signed my photo, laughing at the image of herself. 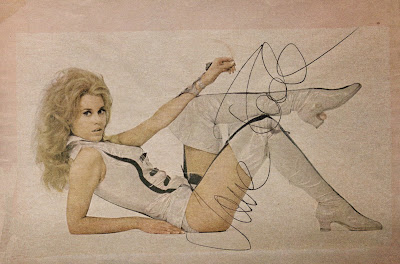