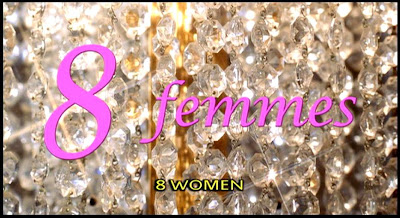 Every now and then, if you're lucky, you come across a film that so nails your particular tastes and fancies that it feels as if someone had snuck into your dreams and extracted a fragment of your psyche. Take George Cukor's The Women, cross it with Agatha Christie, throw in a dash of Les Demoiselles de Rochefort, and you get 8 Women: an intoxicatingly charming cinematic confection aimed directly at the heart of a nostalgia-prone film fan like me.

This Gallic homage to the days of the Hollywood "woman's picture" stars a galaxy of France's greatest actresses in a musical comedy murder mystery that doesn't just tease camp, but envelopes it in a loving embrace.


It's Christmastime in the 1950s and eight wildly divergent women, each with a conventionally dark secret, are trapped by a blizzard in an isolated chateau in the French countryside. The sole male resident of the household has been discovered with a knife sticking out of his back and it is up to the women to discover, through bouts of hysteria, temperament, deceptions, and revelations, the identity of the culprit. That this house should harbor more secrets than a game of "Clue" is no surprise. That the film (directed by Francois Ozon and adapted from a play by Robert Thomas) so playfully and effectively balances the at-odds genres of musical, melodrama, and mystery...well, that's a marvel.﻿ 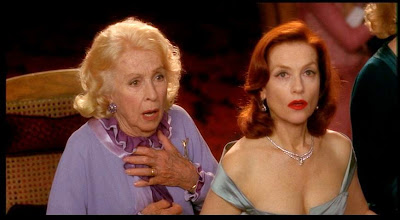 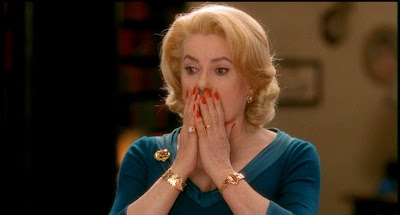 WHAT I LOVE ABOUT THIS FILM
I am just crazy about the way this film looks. The phrase "eye candy" was invented for movies like this. Sporting art direction seemingly inspired by an exploded petit four factory and a color palette taken from a drag queen's makeup case, 8 Women is one sumptuous viewing experience. The rich, hyper-vibrancy of the cinematography intentionally harkens back to the 50s Technicolor melodramas of Ross Hunter and Douglas Sirk, while the tailored, color-specific costuming recalls the glory days of Edith Head and the Hollywood studio system. A system that demanded that stars look like stars no matter the requirements of the script. ﻿
And speaking of stars...WOW! You can seriously overdose on glamour and all-around gorgeousness here. I mean, the sight of Catherine Deneuve and Fanny Ardant on screen at the same time is enough to make a person's eyes fall right out of their head. Ranging in ages from 21 (Sagnier) to 84 (Darrieux), it's striking to see that the smooth, unlined prettiness of the younger stars can't hold a candle to the kind of sensual beauty that age and experience add to a woman's face.

PERFORMANCES
It shouldn't be the cinema anomaly that it is, but one of the more satisfying things about 8 Women is that after taking the trouble to assemble a first-class cast of iconic French actresses, Ozon actually shows off each to her best advantage and allows them to play to their strengths. Consequently, the entire cast is consistently firing on all cylinders and the film fairly crackles with electricity and star-quality in each scene. (My head still aches from the lost, once-in-a-lifetime opportunity of 70s icons Robert DeNiro, Barbra Streisand, and Dustin Hoffman teamed for...Meet the Fockers???? Heaven wept!) 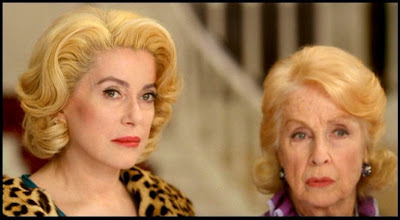 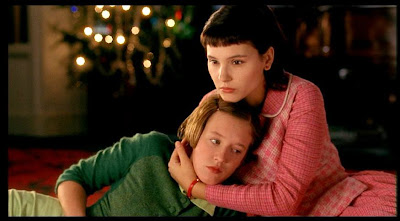 Anyhow, all the actresses in 8 Women are a joy. Super serious Isabelle Huppert proves to be a wonderfully wacky comedienne; Fanny Ardant, heat personified, is intelligent and earthy; Deneuve wittily sends up her own icy screen image; and French legend Danielle Darrieux has a marvelous way with a reaction shot. You really have to watch the film at least twice: once for the subtitles and plot, a second time just to watch the faces. Possibly even a third time, just to pick up all the inside film references (like Emmanuelle Beart's maid costume - down to the kinky, lace-up boots - paying homage to Jeanne Moreau in Bunuel's Diary of a Chambermaid, or Ledoyen's Audrey Hepburn bangs).


THE STUFF OF FANTASY
More difficult than catching lightening in a bottle (and twice as foolhardy) is to attempt to create intentional camp. Camp is a cultural phenomenon easily identified but notoriously resistant to commodification. At its worst its like a comic who ruins the punchline by cracking up at his own joke. At it's best, its feels like something that comes from a place of gentle affection and nostalgia. The stylistic excesses of 8 Women are so funny because its so clear that the director is so fond of them. 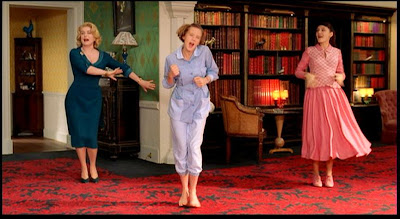 THE STUFF OF DREAMS
Old-style Hollywood films were peerless at using the hyper-reality of the cinema to emphasize real-life issues. All manner of otherwise objectionable material was made digestible if the leading lady was suffering in mink and her surroundings were plush. 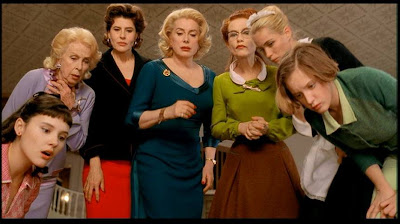 8 Women is not out to make any big social statements, but there are a great many smart, feminist underpinnings behind the ingeniousness of taking the structurally rigid genre of the murder mystery and having that serve as the environment in which repressive gender roles of the 1950s are stylistically juxtaposed with the artifice of old-fashioned Hollywood. A perfect melding of style and content. 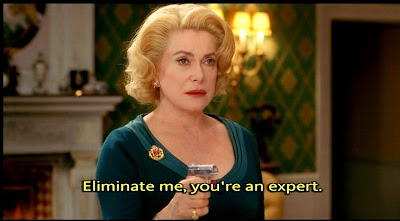 In this age of remake mania, it's impossible to watch 8 Women and not fantasize about who might be cast in an American remake. My mind goes to the actresses I grew up with: Jane Fonda, Faye Dunaway, Jacqueline Bisset, and Julie Christie. Unfortunately, I suspect that the brain-numbing awfulness that was  the 2008 remake of The Women (the film Ozon initially wanted to do) may have forever killed any interest in an American version of this utterly beguiling, utterly original film. 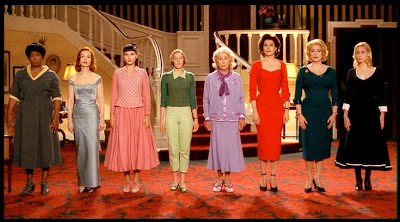 On the plus side, my enjoyment of 8 Women at least sparked an interest in seeing these great actresses in other films. A decision that introduced me to a 35-year old Danielle Darrieux in Max Ophul's masterful The Earrings of Madame de...,  and Catherine Deneuve in Truffaut's sentimental The Last Metro, among others. Seeing all of these actresses in the many different roles they've played over the years only makes me appreciate more the depth and breadth of talent they bring to 8 Women, and grateful for how this film pays such loving tribute to them.