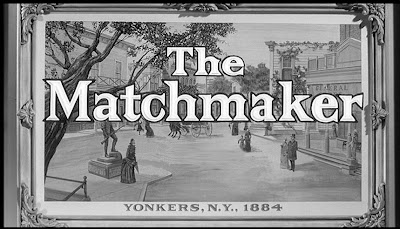 How long has this been going on? That's the Gershwin-inspired that ran through my head when I happened upon this heretofore-unknown-to-me comedy gem about ten-years-ago. As a self-avowed film buff who's devoted a considerable amount of childhood should-be-asleep time to watching old movies on The Late Show and The Late Late Show; how is it that this absolutely delightful little film managed to fly completely under my radar, undetected, all these years?


The Matchmaker is the 1958 screen adaptation of  the 1955 Broadway play about a meddlesome matrimonial matchmaker (Shirley Booth) in 1880’s  who sets her sights on marrying her employer (Paul Ford). If the plot sounds familiar, it’s because the Thornton Wilder (Our Town, Shadow of a Doubt) farcical comedy is the source material for the 1964 Broadway musical Hello, Dolly! and its overstuffed 1968 movie adaptation.

It took all of 60-seconds for me to know that I was going to be wholly captivated by The Matchmaker, which opens with an antique ink engraving of a New York street scene coming to life. To the accompaniment of a jaunty musical score by Adolph Deutsch, the film introduces us to the main characters; each taking the opportunity  to break through the fourth wall, addressing us directly and letting us know that they know they're all in a movie:
Characters continue to speak to us throughout the rest of the film. Sometimes filling us in on the plot, sometimes offering commentary, sometimes offering drolly funny asides. The effect is hilarious and instantly winning.

Which is a rather odd conclusion for me to come to given that I have always held for Hello, Dolly! only a grudging kind of appreciation. I'm not sure if it's the Jerry Herman score (it strives for the robustness of The Music Man but lands at theatrical cheese); the actresses associated with the role (garish, drag-queen-like caricatures of women); or that irksome exclamation point in its title (grammatically appropriate, I know, but an exclamation point attached to a musical just seems to bring out the Grinch in me...I'll decide if I'm excited or not, thank you); but Hello, Dolly! has never struck me as anything more than an efficient, inoffensive entertainment of the sort perfect for dinner theaters and high-school productions. Not particularly funny or clever, and far too strenuously quaint.


WHAT I LOVE ABOUT THIS FILM
Chiefly, its scale. The Matchmaker succeeds because the simplicity of its presentation is utterly appropriate to the material. The overkill of Hello,Dolly! all but submerges the gentle charm of the plot, which is as simple as a fairy tale. In that miraculous way some comedies have, The Matchmaker lights on just the right tone, just the right balance of self-awareness and innocence, to make this delicate type of fluff just take wing and soar. When I first saw this film I was fairly flabbergasted that in virtually every instance where Hello, Dolly! made me groan, The Matchmaker gets it 100% right!

With a cast that knows its way around comedy, both physical and verbal, I found myself laughing at long-familiar dialog that had never elicited as much as a smile from me before. The difference: they were delivered with skilled timing and in character. The screenplay surprises time and time again by revealing real heart behind the gags and traditional mix-ups and misunderstandings of farce.


PERFORMANCES
I always enjoy films where even actors in bit roles are cast and directed to fit as part of an ensemble.  The cast of The Matchmaker fits seamlessly and are all rhythmically on the same page. Each plays it comically large, but real... like in those great old comedies of the '30s. I get a kick out of seeing the ridiculously young Shirley MacLaine paired with the surprisingly sweet and non-creepy Anthony Perkins. Both are just so likable, you root for their romance the first time you see them together.

THE STUFF OF FANTASY
Those familiar with Hello, Dolly! will find it fun picking up bits of dialog that became songs, taking note of added and eliminated characters, and comparing the changes in acting styles. Me, I enjoyed seeing characters reduced to one-dimensionality in the musical revealed to be rather fleshed out in their original form. And when things are at risk of becoming too sweet or cute, the device of having the actors step out of character to address the audience always seems to add a knowing wink indicating that they are aware of playing parts in a dated - but terribly charming - little confection.

It's always been my feeling that a comedy that works is that rarest of movie beasts. Everyone's tastes are different and I can easily imagine how Shirley Booth's grandmotherly appeal and the old-fashioned, light-as-gossamer style of comedy employed here won't be to everyone's liking. But for those, like me, who find nothing funny in the contemporary fascination with scatology, rudeness, and the bottomless wellspring of American male oafishness; well, The Matchmaker is a godsend. I may have missed this terrific little film for the many decades it was available to be seen, but since discovering it, I've more than made up for lost time. It's one of my favorite films. Witty script, clever execution, sharp performances, heart, sentimentality, and a moral to boot!
Copyright © Ken Anderson
Posted by Ken Anderson at 3:08 PM