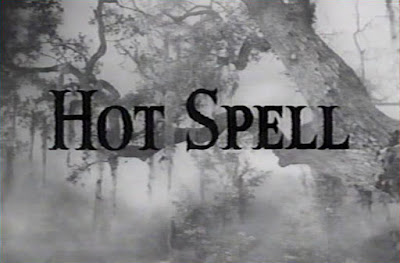 What would Hollywood do without the South as the all-purpose, go-to metaphor for all things hot, steamy, and neurotic during the sexually and emotionally repressed America of the 1950s?Hollywood, pandering to post-war propaganda intended to reassure the nation of a return to prosperity and stability, consistently promoted the image of the Midwest and middle-class suburbs as exemplars of familial “normalcy.” To this end, metropolitan cities were represented as cold and impersonal sin-bins, rife with crime and corruption; while the South – where mossy oak trees and people’s accents drooped in languid surrender to the oppressive heat – was a veritable pressure cooker of stifled passions. No wonder the Southern Gothic (a film genre dear to my heart) came to embody the existential frustration, spiritual discontent, and sexual dissatisfaction of an entire nation.

Between 1958 and 1959, Hollywood released no fewer than six southern-fried movie melodramas: Cat on a Hot Tin Roof, The Long Hot Summer, God’s Little Acre, Suddenly Last Summer, The Sound and the Fury, and the focus of this essay, Lonnie Coleman’s (Beulah Land) little-known but no-less overheated domestic drama, Hot Spell.

Hot Spell is based on Coleman’s unproduced play Next of Kin, and was directed by Daniel Mann (Come Back, Little Sheba) from a screenplay by James Poe (Summer & Smoke, Cat on a Hot Tin Roof). Considering its cast and pedigree, I’m surprised that I hadn’t heard of this film, let alone seen it, until relatively recently.
Hot Spell’s theatrical roots are manifest in the size of its cast (it’s basically a four-character story), the talkiness of its script, and the simplicity of its plot. In the sweltering heat of the eternal summer that is the mainstay of all good Southern Gothics (where a glass of sweet tea is never far from reach), long-suppressed tensions threaten to rupture the gossamer-thin fabric of delusion holding a small New Orleans family together. As frustrations rise to the surface, carefully-constructed illusions begin to crack and blister like paint in the scorching sun.

When the film opens, matronly housewife Alma Duval (Booth) is all aflutter over the 45th birthday party she’s planning for husband Jack (Quinn); a seductively "wild" Cajun whose restless nature she's found – after 25 years of marriage – impossible to fully domesticate. As we observe her nervous attempts to orchestrate (manipulate?) every conceivable variable to assure a favorable outcome for her efforts, Alma’s fervent preparations betray an air of desperation more than celebration.
Armed with the birthday presents she herself purchased for her adult children to give to their father, Alma visits each at their workplace, dispensing behavioral directives and cheery dialogue prompts with every pre-wrapped gift. Perhaps too metaphorically (not for a fan of heavy-handed '50s Freudianism like myself), each child embodies contrasting, narratively-pertinent character traits, and have jobs reflective of their personalities.

Eldest son Buddy (Holliman), all self-seriousness and ambition, works at the family employment agency. Recently out of the army, Buddy is headstrong and restless to make a way for himself in the world. Daddy’s-girl and middle-child Virginia (MacLaine), works at the local 5¢ &10¢ and spends her time lost in fanciful daydreams about her new summer suitor, a pragmatic pre-med student (Warren Stevens). Surrounded all day by valentines, flowers, and perfumes, Virginia is a dreamy romantic. Youngest son, Billy (Kimbrough), is a bookish, sensitive type (coded: gay) who works in a library, and too-keenly feels the tension behind all that remains unspoken in the Duval household. His survival tactic is to escape; first into books, then by going so far as to enlist in the Air Force.

Alma, who refuses to see her offspring as anything but children, charges into these workplace sanctuaries, as heedless of their discomfort as their in-vain efforts to dissuade her from making a big deal out of an event they all know their vain father hardly looks upon as cause for celebration (no one, least of all Jack himself, even remembers the birthday).  It’s Alma’s wish (passive-aggressive insistence, actually) that everyone live the same lie she clings to: to ignore the open-secret of Jack’s mid-life crisis affair with a woman young enough to be his daughter, and just carry on as  if they are still (if indeed they ever were) one big, happy family. 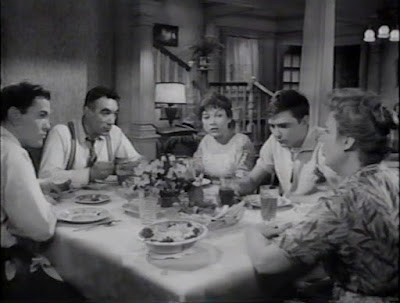 An absorbing drama that benefits significantly from the top-notch performances of its cast, Hot Spell, with its over-familiar central conflict, falls prey to a fate similar to that which befell The Stripper (1963), the screen adaptation of William Inge’s A Loss of Roses; which is to say Hot Spell, in lacking a certain psychological profundity and depth of characterization, feels more like a Playhouse 90 television production than a feature film. But in spite of much of it feeling as though it were culled from earlier, similar sources (most in the Shirley Booth oeuvre) Hot Spell does provide a fairly moving examination of the what the inexorable passing of time portends to a family fighting hard to evade the inevitabilities of growing up, growing older, and growing apart.


WHAT I LOVE ABOUT THIS FILM
The fact that I come from a large Catholic family that never spoke about our emotions (until the 70s when my mother went through EST, after which we spoke of little else) is perhaps the main reasons I love movies like Hot Spell. Call it fantasy projection, but domestic dramas wherein suppressed hostilities and resentments erupt into biliously confrontational exchanges that ultimately prove to be liberatingly cathartic are a favorite of mine. Double if it takes place in the South of the '50s and '60s.
While no one in Hot Spell adopts a Southern accent, and it doesn’t take place in , the film nevertheless has the stamp of Tennessee Williams and William Inge all over it.
As is the custom of the genre, Hot Spell is centered around a social event. An event or occasion necessitating the close-knit interaction of characters (usually under circumstances forcing a display of false emotion or sentiment). Hot Spell’s pivotal birthday party, the catalyst for the film’s domestic upheaval, is largely ironic in function, being that a celebration of growing older is particularly ill-suited for Jack and Alma Duval; a couple deeply invested in living in the past.

In a deluded effort to reclaim his lost, wild youth, Jack imbues a thoroughly common extramarital physical attraction with all the romantic gravitas of true love reborn. , no less delusional, lives in an aspic world frozen in time. Feeling acutely the impending loss of her family, pins all her hopes on a longed-for return to the town of – a state of mind as much as geographical location – idealized in her memory as the place where everyone was happiest.
Caught in the middle: the children (their main offense being their failure to remain so), nurtured as infants to fill a void, weaned in adulthood to be the guardians of their parent’s illusions. There’s more than enough culpability, regret, and incriminations to go around as the Duvals of New Orleans endeavor to weather their personal hot spell of discontent.
Running at a brisk 86 minutes, Hot Spell may be Southern Gothic-lite, but it’s like a Greatest Hits collection of all I hold near about that obsolete film genre.

PERFORMANCES
For those keeping score, this was Booth’s second onscreen swipe at playing a dowdy, once-beautiful housewife delusionally fixated on the past. Perhaps it was an intentional move on Booth’s part to revisit a character almost identical to the one she played in 1952s Come Back, Little (and won an Oscar for), but the effect created is déjà vu to distraction.
Shirley Booth is a remarkable actress and her performance here ranks among her best. She IS the entire film, as far as I’m concerned, and the nuances of vulnerability she brings to the role (along with a hint of the subtle manipulative strength unique to the very weak) is a tour de force. She single-handedly keeps the film from sinking into a mire of clichés. But I’d be lying if I said that much of it feels like I’d seen it all before. It’s like later career Maggie Smith; she’ always excellent, but she’s always the same.

Oscar-winner Eileen Heckart (The Bad Seed) steals every scene as Alma's best friend, Fan. The hilarious sequence where she gives Alma lessons in being a Modern Woman is a worth-the-price-of-admission classic.


1958 was a banner year for Shirley MacLaine, appearing in Hot Spell, Some Came Running (for which she won an Oscar nomination), and the delightful The Matchmaker. As the lovesick daughter, MacLaine isn’t called upon to do anything here that Elinor Donahue didn’t do on TV every week in Father Knows Best, but her easygoing, natural appeal is a major asset to a film as dramatically stagy as Hot Spell.

THE STUFF OF FANTASY
I’ve always been fascinated by the fact that the same breast-fixated/blonde bombshell era that produced Marilyn Monroe and Jayne Mansfield, also found room to appreciate the matronly charms of actresses like Shirley Booth and Geraldine Page. These actresses may not have been the pin-up type, but they played middle-aged women who were still afforded passions, sex drives, and depth. While most of Hollywood was falling over itself looking for the next fetishized male fantasy sex symbol, gay writers like Inge, Williams, and Coleman were creating dimensional roles for real women.

THE STUFF OF DREAMS
Wasn’t it Margo Channing who said, “I detest cheap sentiment”? Well, normally I do, too, but something about Hot Spell always gets the waterworks going come fade-out. That something is Shirley Booth and the breadth of emotions she brings to her almost stock character. It’s a memorable (albeit familiar) performance in a movie that’s far more enjoyable than it should be. A credit to the cast, to be sure.
I don’t know if Hot Spell is available on DVD yet, but it crops up on TCM from time to time and is definitely worth a watch. It’s not likely to make anyone forget Come Back Little Sheba or invite comparisons to O’Neill’s Long Day’s Journey Into Night, but it is a fine example of a once-popular dramatic genre, that (based on recent posts for The Stripper, Cat on a Hot Tin Roof, and Come Back to the 5 & Dime, Jimmy Dean, Jimmy Dean) I can’t seem to get enough of. 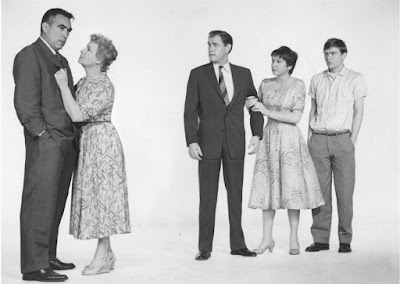