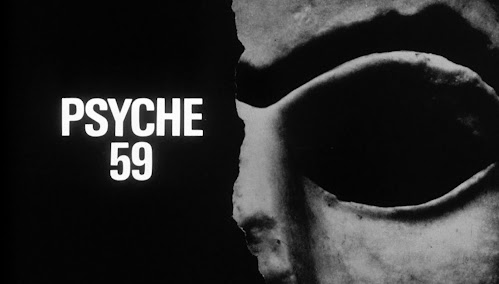 Submerged passions and mid-‘60s elan ooze from every impressionist frame of Psyche 59, a dreamily stylish, low-simmer psychological drama with an irresistible title. The second feature film from American director Alexander Singer (whose debut, 1961’s A Cold Wind in August, infused a pulpy May-December sexploitation melodrama with something resembling poignance), Psyche 59 is a British production starring Patricia Neal in her first role following her Best Supporting Actress Oscar win for her earthy performance in Hud (1963). Psyche 59 has Neal, in a return to the kind of sophisticated characters she played in Breakfast at Tiffany’s (1961) and The Fountainhead (1949), trading in her A Face in the Crowd/Hud housedresses and Kentucky drawl for Paris couture and posh urban neurosis.

And one other little detail...five years ago, Allison was struck blind.

It was five years ago, on the night her second child was born, Allison was stricken blind after she fell down a flight of stairs in her home. But doctors have determined that the loss of sight is not the result of an injury sustained in the fall, but rather—like the plight of the titular character of The Who’s 1969 rock-opera Tommy—a psychosomatic, shock-induced reaction to witnessing something traumatic. Alas, Allison can't remember a thing about that night except being awakened by labor pains, finding her husband missing from their bed, and leaving the bedroom to look for him. At this point, she draws a blank. All attempts to reconstruct the further events of that evening in her mind are met with piercing headaches and a subconscious resistance: “My brain won’t accept the images my eyes make.”

We viewers, however, face no such resistance. Both the source and content of Allison’s trauma becomes crystal clear the instant we lay eyes on baby sister Robin—a laser-eyed chaos agent on two very long and shapely legs—and see how angry and agitated (i.e., hot and bothered) Eric becomes at the mere thought of her re-insinuating herself into their lives. Although Allison remains clueless, the film doesn't waste time mounting false suspense over the question of "Did they, or didn't they?" (They did.) Rather, we're left to wonder if a woman as intelligent and sensitive as Allison can really be so oblivious to events blatantly happening directly under her nose and "right before her very eyes," or if, in causing her to lose both her sight and her memory of that night, is her mind shielding her or simply carrying out her will?

Just how much Allison does know or doesn't know is the ambiguous tease and Freudian thrust of Psyche 59...an arthouse-influenced mood piece of deceit and self-deception among the literally and figuratively blind. A film about subjective honesty, emotional truth, and coming to terms with the fact that...at least in matters of the heart...insight is inarguably more eloquent than sight.

I‘m not sure how it is I never heard of Psyche 59 until now, but this kind of erotically-charged domestic dysfunction psychodrama—to use an appropriately UK idiom—ticks all the right boxes for me. It certainly doesn’t hurt that the feel of the film is strictly European arthouse, but its premise—a wealthy woman driven hysterically blind by obsessive love—is pure studio-era Joan Crawford. The film’s photogenic cast, forming a kind of 4-character chamber ensemble, play disparate, desperate individuals caught up in a mating-dance roundelay of unrequited love and unreciprocated desire. The structure of their thorny interrelationships a psychological hall-of-mirrors where what most needs to be sad is never uttered and no two are ever in love unless it’s with the absolute wrong person at the worst possible time.

While taking in the emotionally inarticulate fumblings of Psyche 59's passion-ruled characters, my mind kept flashing to the romantic entanglements in Stephen Sondheim’s A Little Night Music, the 1973 Broadway musical version of Ingmar Bergman’s Smiles of a Summer Night (1955). There’s nothing light or farcical about Psyche 59's somber quartet, but once they all go traipsing off for an ill-fated holiday in the country, the memory of Sondheim's lyrics underscored every day's little death.

As I’ve mentioned, I think Psyche 59 is an absolutely fabulous title for a movie. It’s certainly evocative. Too much so, perhaps, as it initially had me anticipating a suspense thriller along the lines of Francis Ford Coppola’s Dementia 13 (1963). Psyche 59 is the title of the 1959 French novel by Françoise des Ligneris upon which Julian Halevy’s oblique screenplay is based. The title’s numerical significance appears to be linked to its contemporaneity: the 1963 English edition was titled Psyche 63. The film version never explains the title’s meaning, leaving us with the suggestion (set in London, 1964 and Allison & Eric’s second daughter looks to be about 5-years-old) that it applies to the year of Allison's psychological breakdown.

The  ”Psyche” of the title has a bifurcated significance to the narrative, most explicitly as it pertains to the psyche of Freudian psychological theory. This is psyche defined as the housing of the human personality (the id, ego, and superego) as it relates to the conscious and subconscious mind.

Allison, a woman we come to learn was blind long before she lost the ability to see, allows her subconscious to erase what her conscious mind is unwilling to face. In the tradition of true Freudian symbolism, the warring components of Allison’s inner personality crisis manifest themselves externally in her relationships: Robin is the sexually impulsive id; the sincere and stable Paul, the ego; and her grandmother is the judgemental, guilt-tripping superego.

But Psyche 59 is also a contemporary reworking of the Greek myth of Psyche, the goddess of the soul. The parallels abound. Aphrodite, the goddess of love, vows revenge on the mortal Psyche for stealing the attentions of men (Robin sees Allison as having stolen Eric from her). Psyche’s father abandons her on a mountaintop (Allison and Robin were abandoned by their father) where she is fated by the gods to marry a cruel and savage beast (that would be Eric), a beast whose hideous form Psyche is forbidden to gaze upon (psychosomatic blindness). Unable to see his form, Psyche falls in love with the man she imagines him to be. The beast is actually Eros the god of love and fertility (the virile Eric/Eros harbors a god-like image of himself). I won’t go into how further events play out, only adding that Greek myths are not generally known for their happy endings.

Effective as an ensemble, rising to the occasion when given their moments to shine in individual scenes, Psyche 59 may be sparsely populated, but its few roles are extremely well cast.  It's no surprise that the always-wonderful Patricia Neal gives a sensitive and compelling performance (even with her eyes shaded, there's no barrier to us knowing what her character is feeling). Like her subtextual namesake, she's the soul of this movie. This is the second film I've seen in which Samantha Eggar plays a femme fatale (my first was Return from the Ashes - 1965) and I've fallen in love. She may be the least-experienced member of the cast, but I think she gives a hell of a performance. More to my liking than her great work in The Collector (1965).

I've seen talented character actor Ian Bannen is many things, but mostly from late in his career. I had no idea he was such a babe! Distractingly handsome appearance aside, his character is not showy, but in his quietude, he's fascinating to watch. Bannen's catalog of disdainful looks aimed at Curt Jurgen are a virtual lexicon of disgust. Jurgens, and actor who has heretofore never registered much on my radar because he always seemed to be cast as something officious and stern, caught me off guard in his ability to exude genuine dominating sex appeal of the sort that has little to do with looks, and all to do with attitude. If Neal is the soul of the film, Jurgens is the magnetism. 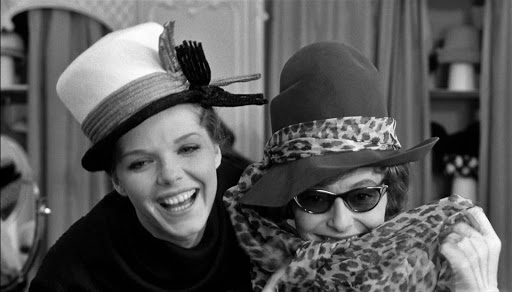 Though they can sometimes prove grueling, I have a soft spot for self-serious dramas about neurotic women in stylish hats agonizing over louche husbands (a la The Pumpkin Eater – 1963). Especially if every frame of their suffering looks as though it were shot by Richard Avedon. And looks do count for a great deal in Psyche 59, a Gallic-flavored psycho-sexual soufflé about sight that I feel intentionally emphasizes the visual in its storytelling (the viewer is encouraged to not just look, but see) as a means of underscoring Allison’s inability/unwillingness to open her eyes. The striking cinematography is by Walter Lassalley (Oscar winner for Zorba the Greek - 1964) and is the real name-above-the-title star of Psyche 59. Frequently, the intensity of Lassalley's gorgeous high-contrast B&W cinematography achieves an intensity that is heart-achingly moving.

Because I dote on movies about character conflict, Psyche 59 practically qualifies as an action movie for me. But I fully understand how a leisurely-paced film such as this might call to mind for some another A Little Night Music lyric: “So inactive that one has to lie down.”

I can’t help but recognize that some of the major factors contributing to my finding Psyche 59 so utterly fascinating are its similarities to Mike Nichols’ trilogy of marital dysfunction: Who’s Afraid of Virginia Woolf? (1966), Carnal Knowledge (1970), and Closer (2004); three films that speak to love’s vulnerability to willful self-deception. Psyche 59 is a worthy addition to my collection, not a masterpiece, but a film so pleasingly guarded with its intentions, yet so self-assured (like Eric), it allows itself to be misunderstood. 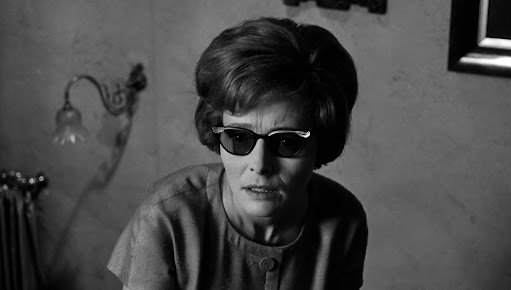