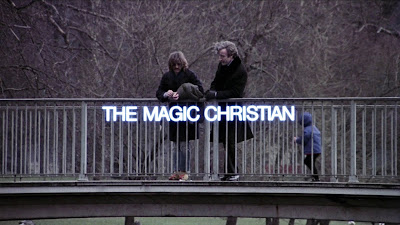 Revisiting The Magic Christian after a nearly 40-year gap was an experience by turns amusing, nostalgic, and bewildering. It was great seeing the movie looking so good on Blu-ray, and I especially got a kick out of the many cameo appearances and discovering what things about the film had stayed with me over the years. For example, it was gratifying to find that the pre-credits sequence (my favorite part of the film) was still as clever as I’d remembered it: a distinguished portrait of the Queen is revealed to be a British 10-pound note, after which the audience is encouraged to sing along to a follow-the-bouncing-ball stanza of the Paul McCarney composition (sung by Badfinger) “Come and Get It.” (How tragic is it that my favorite part of The Magic Christian takes place before the film proper even begins?)

What bewildered me was just how unfunny the film now seems to me. I wasn’t bored, I enjoyed myself, and the film kept my interest, and I still champion the overall idea of the film. But the experience of watching it was entirely laugh-free. Granted, so much of the film’s humor is reliant on shock and the element of surprise, so it can be said that my reaction is at least in part due to my being so familiar with the material.
But that doesn’t account for the benumbing effect of the wash-rinse-repeat satire cycle of the screenplay or the loose-moorings structure of the film itself. It's weird watching an entire film that has no real human behavior in it. At the start of the film, there's a series of crosscuts between the morning rituals of Sellers and Starr that juxtapose and contrast the lives of the haves and the have-nots. There's a sweetness to it that sets the stage for an anticipated humane political polemic that never materializes.
Not helping matters is the inconsistent nature of Guy's pranks. The point he's trying to prove to Youngman grows murky as his stunts veer from harmless (turning Shakespeare's Hamlet into a burlesque) to mean-spirited (grossly overpaying a hot dog vendor and insisting on his change from a moving train).
I'm of the opinion that the truest screen interpretation of Terry Southern's Guy Grand is to be found in Gene Wilder's Willy Wonka (think about it...all he does is play tricks on the greedy and self-interested!). And for a good example of the kind of lively, in-the-spirit-of-mischief chemistry lacking in the pairing of Sellers and Starr, I really think Peter Cook and Dudley Moore hit paydirt in Bedazzled.
PERFORMANCES
I’m gonna lead off by saying that I truly love the look Peter Sellers devised for Sir Guy Grand. Simultaneously dashing and screwball, it’s said that Sellers sought to approximate the look of a young Albert Schweitzer while portraying Grand as a kind of British Groucho Marx. He’s considerably more successful in the former than the latter. I think Sellers is far too inspired a comic actor to ever be uninteresting, so I can’t say I don’t enjoy him in The Magic Christian. But the screenplay doesn’t provide a character for Sellers to play and he doesn’t appear particularly interested in supplying one on his own. So, outside of an accent and a whimsical swath of hair, his Guy Grand very nearly doesn’t exist. 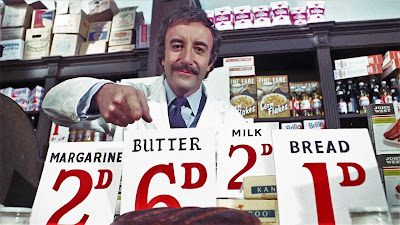 But he's in good company with the charming but wholly superfluous Ringo Starr. In a role not in the book and written with him in mind (contrary to erroneous claims that John Lennon was first considered) I suspect the intention was to supply a little youth-identification for the audience while mining the silent, Chaplinesque quality Starr brought to his well-received solo bits in Help! and A Hard Day’s Night. And certainly, if you saw him in Candy, you know a Ringo Starr with no dialogue is the best possible course of action to take. But, like Sellers, he's not given a character to play and brings nothing to the part but a droopy mustache and Rita Tushingham eyes.
THE STUFF OF FANTASY 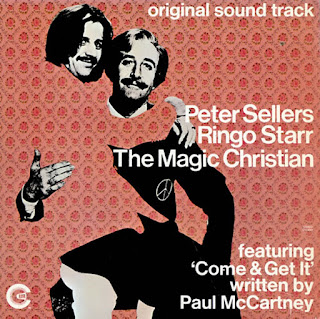 At least one aspect of The Magic Christian has not changed a bit for me over the years. The soundtrack to this movie is terrific. I love the infectious "Come & Get It"--particularly the soaring strings instrumental arrangement that accompanies the closing credits. It gave me goosebumps the first time I heard it blaring through the speakers at the movie theater.
But the song that really stands out as the one I most associate with the film is Thunderclap Newman's youth rebellion anthem "Something in the Air." I think it's brilliant. I heard it for the first time in The Magic Christian theatrical trailer and instantly fell in love. And I'm still crazy about it. One of my all-time favorite '60s songs. In 1973 the singing group Labelle covered it in a version that combined it with Gil Scott Heron's poem "The Revolution Will Not Be Televised." You owe it to yourself to give it a listen...to use one of my favorite Magic Christian quotes: "It'll tighten your wig." 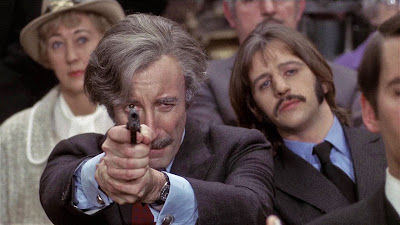 THE STUFF OF DREAMS
What keeps The Magic Christian among my list of "tarnished favorites" is that despite not feeling as strongly about it as I did when I was a kid, I tend to think of it as one of the last of the optimistic flower-children/hippie films. The Nixon era of disillusionment and cynicism was right on the horizon and the idealism at the heart of The Magic Christian had already started to be replaced by the snark and smirk of movies like M.A.S.H. (1970).
In the ensuing decades, capitalism has done its job so well that today, social media is full of individuals just managing to get by financially who nevertheless seize every opportunity to be the white knights and front-line defenders of the Jeff Bezos and Elon Musks of our culture whenever a legitimate criticism is voiced regarding the morality of being grotesquely rich in a civilized society that tolerates hunger.
In such an atmosphere it's impossible to completely dislike a movie that associates wallowing in money with wallowing in feces, blood, and urine. 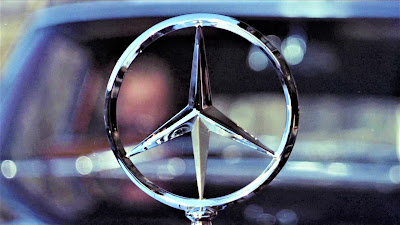 A hippie at heart, Sir Guy Grand has the three-pointed star hood ornament
of his Mercedes-Benz reconfigured as a peace symbol.
Copyright © Ken Anderson   2009 - 2022
Posted by Ken Anderson at 5:34 AM 13 comments: