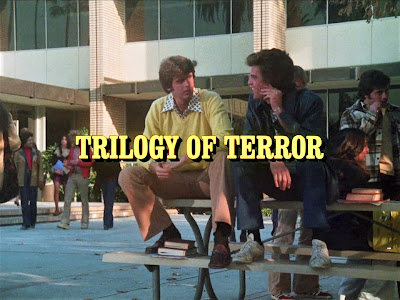 A woman spends a nightmarish evening fighting for her life after inadvertently releasing the spirit of a Zuni warrior encased in an ancient fetish doll.
When the topic turns to Trilogy of Terror, the now-iconic AMELIA episode is what everyone thinks of exclusively. And for good reason. Even after all these years, the idea of an ankle-high, razor-toothed, knife-wielding Zuni warrior speeding at you across the wall-to-wall carpet is still pretty hair-raising shit. Coupled with Karen Black’s glass-shattering screams, frequent falls, and oh-so-relatable shock reactions; there can be no mystery as to why this memorable horror vignette has achieved the status of kindertrauma klassic.
I was a senior in high school when Trilogy of Terror aired, so while the widely-watched TV movie was all any of us could talk about at school the following day, it was never the stuff of nightmares as it was for so many who have claimed it as their seminal childhood freakout.
(Curiously enough, my own kindertrauma moment was a different teleplay written by Trilogy of Terror’s Richard Matheson. It was that 1961 episode of  The Twilight Zone titled “The Invaders.” It starred Agnes Moorehead as a woman alone in a deserted farmhouse terrorized by ankle-high, knife-wielding spacemen.) 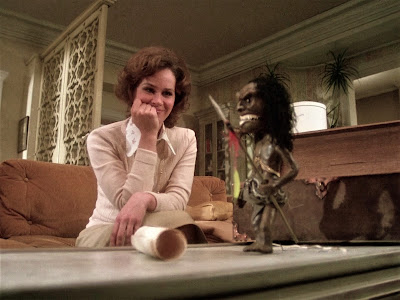 Karen Black’s performance in this episode is the jewel in the trilogy’s crown. It’s a one-woman show-stopper (she should have been Emmy-nominated for the self-penned phone monologue sequence alone) that sees Black’s wholesale commitment to her character and Matheson’s fantastic premise saving the whole thing from slipping into macabre silliness. 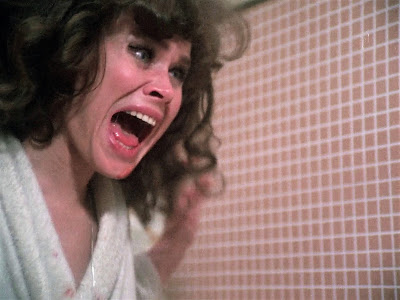 Playing on primal fears and familiar phobias, AMELIA is a “fun” scare all the way, allowing the viewer to jump in surprise, squirm at the suspense, giggle at their own jitters, and yell at the screen “Don’t open that suitcase!” Best of all, Amelia is a character we really root for. So much so that the film’s literal killer ending is hard not to be perceived as a triumph for Amelia, for she is at last in a position (a warrior’s crouch, in fact) to have the last word with her mother.
Although it’s well-known that Trilogy of Terror was a movie Karen Black initially had no interest in making and that she perhaps ultimately regretted the role the film’s popularity played in pigeonholing her as a Scream Queen and taking her career into a direction she hadn't intended. But as a Karen Black fan who has always been a little bit frustrated by how little camera time she has in some of her most famous supporting roles, I’m grateful as hell for Trilogy of Terror. Not just because it represents some of her best work, but because it's a stellar, front-and-center showcase for a brilliant actress who too often had to shine from the sidelines.
Copyright © Ken Anderson   2009 - 2022
Posted by Ken Anderson at 5:01 AM 22 comments: