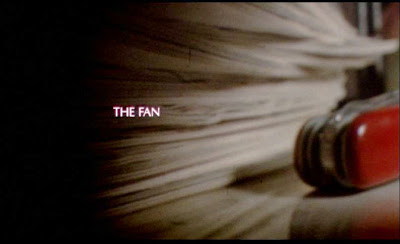 If theater geeks and Glee habitués ever longed for their own 80s slasher film, then The Fan fits the Playbill, so to speak. This unappetizingly violent, yet oh-so delectable blend of backstage musical, slasher-thriller, and woman-in-peril melodrama (to borrow a line from one of the Louis St. Louis [Grease 2] showtunes crooned over the course of the film), “Got no love” when released in the spring of 1981, but is deserving of rediscovery.


No low-budget gore-fest populated by a cast of nondescript teens stalked by a masked phantom, The Fan was A-List all the way. It had then-hot-as-a-firecracker producer Robert Stigwood (Grease); a sizable budget; great Manhattan locations and a distinguished cast of New York actors; and pedigreed Broadway composers (Marvin Hamlisch and Tim Rice contributed two songs).
It also had and up-and-coming creative team comprised of TV commercial/music video director Edward Bianchi (making his feature film debut), and choreographer Arlene Philips (Can’t StopThe Music, Annie). The production was conceived as a stylish, Hitchcockian thriller along the lines of Eyes of Laura Mars (1978) and Brian De Palma’s Dressed to Kill (1980).
Unfortunately, somewhere along the path from screenplay to movie-house, The Fan transmutated into something which simultaneously confounded and confused. Star Bacall claimed the final film turned out to be bloodier and a great deal more graphic than the initial screenplay indicated, thereby turning off her audience base. Meanwhile, the typical youth-based demographic for slasher films like Halloween and Friday the 13th had a hard time relating to The Fan’s largely middle-aged cast and theater world setting.

Of course, what proved most grievously detrimental to The Fan’s ultimate public reception was the December 1980 shooting death of John Lennon by an obsessed fan (The Fan, having wrapped that summer, was already in post-production). This tragedy was followed by the attempted assassination of President Ronald Reagan in March of 1981 by a fan obsessed with actress Jodie Foster. This happened just two months before The Fan's May 1981 release date. Further compounding the whole reality vs. fiction creep-out factor of all this was the fact that Bacall, portraying a Broadway star opening in a new musical, was at the time indeed opening on Broadway in the musical, Woman of the Year (March, 1981). As if that wasn't already too much too-close-for comfort coincidence, Bacall happened also to be a resident of The Dakota apartments, the very site of Lennon’s fatal shooting (and the birthplace of the Antichrist in Rosemary's Baby; but let's not confuse fantasy with reality any more than we have to at this point).

Depending on how cynical one was, the general atmosphere at the time couldn't have been better or worse for the release of a film about a star drawing the homicidal attentions of an obsessed fan. Paramount, perhaps to its discredit, chose not to postpone the release of The Fan and instead instead distributed theatrical trailers featuring a disclaimer stating that in no way was The Fan inspired by the tragic death of John Lennon. An act which actually served to  to remind people of the Lennon tragedy under the guise of distancing itself from it. Whether seen as sensitive or in poor taste, in the end it didn't really matter.

Torpedoed by probably one of the worst posters in recent memory and mixed to pan reviews, The Fan continued on its inexorably jinxed, undeserved course to obscurity.

Celebrity and fan obsession is a compellingly intriguing topic for a thriller. The whole codependent, love/hate, need/resent, fear/envy aspect of the “relationship” between the famous and the adoring public is ripe fodder for film treatment. The connection between celebrity and fan is a "relationship," by design and necessity, doomed forever to be one-sided: the fan feels an intimate kinship with someone who doesn't know they exist. Perhaps because of this imaginary, essentially hungry, connection, it's no surprise then how quickly fawning fandom can change to bilious hate if the fan’s attentions are even marginally rebuffed. 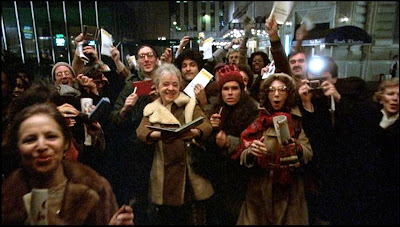 I’m reminded of a scene in Martin Scorsese’s The King of Comedy (a marvelously dark black comedy about fan obsession that would make a great double-bill with The Fan) in which talk-show host Jerry Lewis is walking down the street. When asked by a fan at a public phone to say a few words to her friend on the line, he politely demurs, claiming that he's running late. At this point, the seconds-ago adoring fan flips to bile-spewing enemy, shouting “You should only get cancer! I hope you get cancer!” Yikes!
But such is the mercurial, frighteningly delicate line between love and hate that is fandom and celebrity obsession. Had The Fan set its sights on examining this already terrifying dynamic in the form of a strict psychological thriller, it had the potential for providing an insightful, genuinely chilling look at our increasingly celebrity-obsessed culture. In going the slasher/stalker route, The Fan cheapens and sensationalizes the material, making the events appear more remote and unlikely than in reality they are.

Anyone who has ever attended a celebrity autograph convention or looked at the crowds outside of a movie premiere knows how Day of the Locust-like and unnerving celebrity-worship feels. There are so many things The Fan does right (depicting the many ways in which the famous are vulnerable to the public, conveying how the promise held forth by fame-culture fuels a never-to-be-satiated hunger in fans) but in not trusting the inherent, subtle creepiness of the material as is, misses a terrific opportunity to scare us with a bracing look at ourselves.


WHAT I LOVE ABOUT THIS FILM
What brings me back to The Fan time and time again are its many sequences depicting the behind-the-scenes creation of the fictional Broadway musical Never Say Never, which is to be star Sally Ross’ singing and dancing debut. What with its use of recognized Broadway dancers, NY locations, and knowing attention to procedural detail; the feel is very authentic, very 80s, and very stylishly evoked. I find these scenes a bit camp to be sure (what with all those legwarmers and Arlene Philips' trademark Hot Gossip choreography), but I have to say all of it contributes to giving us a refreshingly novel backdrop for a suspense thriller. Silly as they may be, they are also terrifically fun. Of course it doesn't hurt that I saw this film during my early days as a dancer, or that in 1983, when I took my first trip to New York, I studied dance at Jo Jo's, the studio featured in the film. 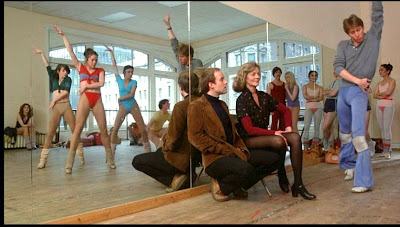 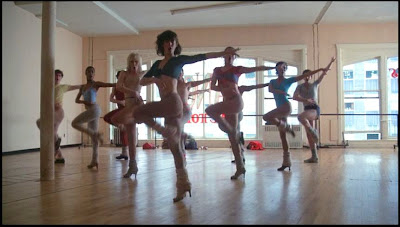 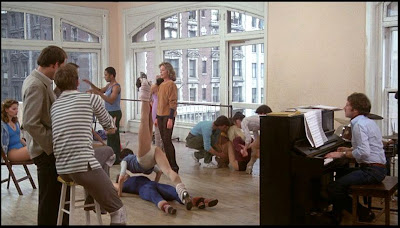 If you’re going to make a film about the kind of classic Hollywood star capable of inciting the flames of obsessive fandom, you can't do much better than all-around class-act, Lauren Bacall. Her gravitas as a full-fledged movie star from the golden era gives The Fan a shot of instant legitimacy every time she appears. In one of the largest roles of her career, Bacall is really very good at portraying a character not very far removed from what the public perceives her to be. She is so good in fact, that I kept wishing the film would just allow for the basic character drama of this ageing star grappling with loneliness, self-doubt, and vulnerability, play itself out minus all the genre machinations.

THE STUFF OF FANTASY
The '80s come vividly alive in the film's Broadway musical sequences, which are sort of Solid Gold meets Can't Stop The Music. I don't care if I enjoy these sequences for all the wrong reasons, they're a hoot and absolutely fantastic! 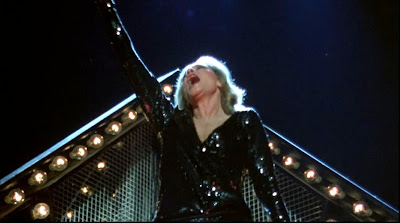 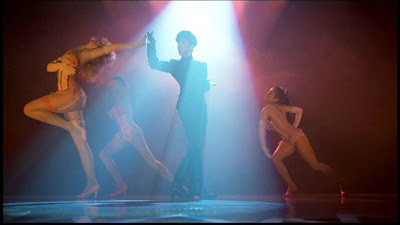 I've never considered The Fan to be as bad a film as its reputation has led people to believe. Its screenplay is clichéd to be sure (the stage doorman is actually named “Pop”) and the violence needlessly gruesome for such a visually distinguished and stylish film (Bianchi’s music video background is in full, glossy evidence); but with a provocative theme and talented cast, The Fan has quite a bit going for it even with its flaws. One might have wished for a little more finesse in the areas of motivation and character, but I seriously have a soft spot in my heart for this movie...mostly centered around the Broadway setting, the images of a still gritty and grimy New York, and reminders of my early years in dance. Who was it that said, "Nostalgia ain't what it used to be"? 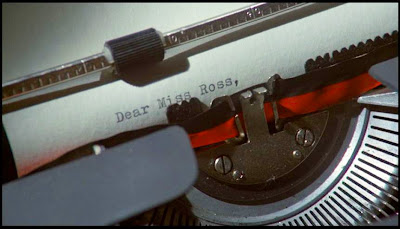