SEANCE ON A WET AFTERNOON 1964 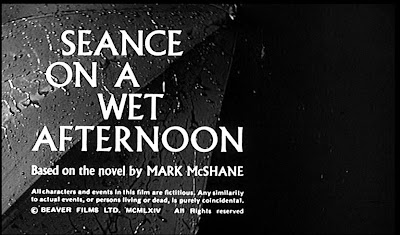 This film was first brought to my attention by Mark over at the terrific blogsite, Random Ramblings, Thoughts and Fiction in a discussion on The Stepford Wives and director Bryan Forbes. Informed that the stylistically uneven and nepotism-prone director (wife Nanette Newman appears, by contract it would seem, in virtually every film) had really scored a hit with the noir-ish kidnap caper film Séance on a Wet Afternoon, I was eager to get a look at this well-regarded British thriller that seems to have fallen through the cracks a bit here in the U.S. Well, rather obligingly, TCM recently screened Séance on a Wet Afternoon and I must say, I was seriously floored and thoroughly impressed. What a marvelous, wholly satisfying surprise! If, as I suspect, Forbes was was hired to helm The Stepford Wives on the strength of this film, I fully understand why. Where has this movie been all my life?

Séance on a Wet Afternoon is a claustrophobically tense suspense thriller/crime drama about a kidnap plot hatched by an eager-for-fame trance medium (Kim Stanley) and her dominated husband (Richard Attenborough).
Possessed, since childhood, of a psychic gift granting foresight through communion with spirits in other dimensions, Myra Savage has always known she was “different,” but has sustained herself with the notion that she is also "special." But an adult existence of workaday mundanity (she supports herself and her unemployed, asthmatic husband by conducting once-a-week séances in the gloomy Victorian home they share) and lingering remnants of a past tragedy have conspired to render her gifts, if not wasted, then of minimal consequence. Determined to right fate's wrongs and fulfill her arrogate destiny, Myra prevails upon her weak-willed husband to carry out the "borrowing" of the daughter of a wealthy businessman so that a charade might be enacted wherein, after ransom is demanded and the press alerted, Myra can gain notoriety by way of what she calls  "The lie that reveals the truth": the feigning of psychic intervention in leading the grieving parents to the whereabouts of the daughter and the discovery of the ransom. 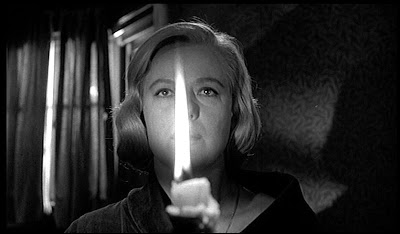 Of course, the Gothic turn of the screw in Séance on a Wet Afternoon is Myra’s obvious mental instability (raising doubts about her claim of psychic talent) and the peculiar, Lady Macbeth-ish influence she wields over her apprehensively compliant, yet devoted husband Billy.

WHAT I LOVE ABOUT THIS FILM
I have a fondness for films about crime capers that go terribly wrong. Whether due to human error (some character’s “fatal flaw”) or merely faulty planning, it always strikes me as a marvelously theatrical dramatization of the folly and arrogance of mankind ever thinking it has control over the outcome of anything. The rather deranged motivations that set in motion Séance on a Wet Afternoon’s kidnapping plot are unsettlingly compounded by the codependent master/slave relationship shared by Myra and Billy.

In an ambiguous interplay which recalls the dysfunctional dynamics of George and Martha in Edward Albee’s Who’s Afraid of Virginia Woolf?, the “gifted” Myra, the family’s sole breadwinner and whose inherited house they share, clearly dominates Billy, but Billy’s brow-beaten silences have an air of weary condescension. One senses that he has learned that it is easier to suffer his wife’s erratic behavior and cutting invectives than to challenge them. Billy relates to Myra as one might a person suffering from Alzheimer’s. In scenes where Myra appears to forget or has re-imagined some event from the past, Billy either recants or hesitates at revealing the truth (e.g., when Myra turns off the blaring Victrola only moments later to accuse Billy of doing so, he doesn't contradict her).

PERFORMANCES
Kim Stanley’s screen appearances may have been infrequent, but in each instance (most notably Paddy Chayefsky’s The Goddess- 1958) she seriously came to clean house. This woman wasn't fooling around! In portraying the escalatingly unhinged mastermind of a spiritually mandated kidnap-for-fame scheme, Stanley creates and inhabits a character of mesmerizing and terrifying complexity. Both fragile and steely, Myra Savage is a role so inherently distasteful that marketable stars Simone Signoret and Deborah Kerr declined it outright. Yet Stanley imbues Myra with such a mercurially shifting palette of conflicting emotions that she emerges never exclusively a villain or victim; merely a frighteningly authentic incarnation of the  internal desolation that is madness. Stanley's performance garnered an Oscar nomination, and rightfully so.


I never thought I could ever forgive Richard Attenborough after what he did to A Chorus Line (1985), but after seeing his chilling turn in 10 Rilllington Place (1971) last year, and now Séance on a Wet Afternoon…well, I can see that the man is quite prodigiously talented when kept in front of the camera. As the somewhat infantilized spouse (there’s an emasculating absurdity in this well-past-middle-aged man being referred to as “Billy”), Attenborough’s quiet anguish is well-matched with Stanley’s showier display of insanity. Not allowed a “backstory” as to how he came to be so cowed by his wife, Attenborough’s surprisingly expressive eyes convey the defeated compromise and devotionally loving tolerance that binds this obviously intelligent man to a delusional woman determined to lead them both toward tragedy.

THE STUFF OF FANTASY
Atmospheric and loaded with dramatic tension, Séance on a Wet Afternoon nevertheless might be too procedural and talky for some people’s tastes. Indeed, the screenplay, as adapted by director Forbes from the 1961 novel by Mark McShane, could easily be turned into a stage play with few alterations. (In the year 2000, Séance on a Wet Afternoon was remade as a Japanese horror film titled, Séance, and in 2009 it was made into an opera composed by Wicked’s Stephen Schwartz.)

Personally, being a tad weary of the flash cut, ADD, CGI stuff of today, I enjoy seeing film so deliberately paced. It's nice to have a film trust an audience will allow events to unfold as they need to, not just in a way dedicated to providing a thrill a minute. The time spent in allowing us to know and understand the characters on a more substantial level has the remarkable effect of creating empathy for both the villains and the victims. I found myself simultaneously rooting for and against the kidnappers' detection.
Note* Based on several reviews and summaries I've read online, it seems there exists the possibility of misunderstanding what occurs during the film’s gripping conclusion if one fails to pay close attention. What is spoken is so important during these crucial final moments (and alas, the DVD release comes without a “captions” option) an unheard word or two is apt to leave you walking away with an entirely different impression of how this film really ends.
THE STUFF OF DREAMS
Shot in exquisite black and white by cinematographer Gerry Turpin and employing all the deep-focus/high-contrast flourishes of the best of film noir and mid-'60s thrillers, Séance on a Wet Afternoon makes a great companion piece to those similar exercises in bloodless terror: The Innocents (1961) and The Haunting (1963). I very much liked the hauntingly sinister score by the late, great John Barry, and Bryan Forbes methodical buildup of suspense was especially to my taste. It’s often difficult to know specifically what a director is responsible for in a film, but in comparing The Stepford Wives with Séance on a Wet Afternoon, I’m leaning towards investment in character over plot. Both films kept me riveted because the characters came alive for me in such complex, deeply flawed (human) ways, I cared about what happened to them. For a film to succeed in drawing the viewer into the emotional reality of a film, seems the most thrilling special effect of all. 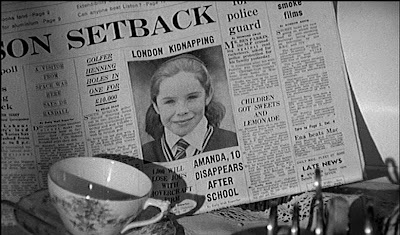