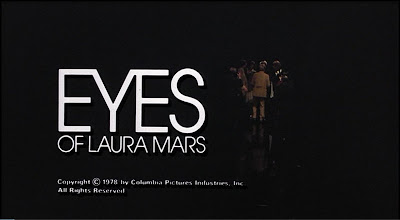 There are some movies you fall in love with which seriously call into question your judgment, aesthetics, and sanity. These are the films that fall outside of the easy-to-rationalize pleasures of camp, the above-criticism-snobbery of cult, and the so-subjective-it doesn't-bear-discussion reverence of geek-culture franchises. These are the movies which appeal to you for reasons (in the words of Barbarella's Durand-Durand), "That are beyond all known philosophies."

Eyes of Laura Mars is such a film. A well-crafted, imaginative, suspense thriller whose flaws frequently loom so large that, over time, they start to take on the character of virtues.
Eyes of Laura Mars - you can tell the film is hip because, like a rock band that wants to be taken seriously, it dispenses with the article, "The" at the start - is a romantic thriller about a hotshot fashion photographer (Dunaway) whose titular eyes she happens to share with a serial killer. Not literally, like a co-op, but psychically, at grievously inconvenient moments throughout her day, Laura Mars literally sees through the eyes of the killer. Targeting her friends and colleagues, the killer implicates the controversially provocative photographer by committing murders in ways that duplicate (inspire? Hmmm...) Laura's own death-fixated, violently erotic fashion layouts.

At its core, Eyes of Laura Mars may be just a another stylishly dressed-up pulp thriller, but BOY is it a pulp thriller that works!
Movies built around a gimmick, even a clever one, can be problematic. Everything hinges on working the gimmick into the film as quickly and as frequently as possible, often at the expense of a coherent plot. Eyes of Laura Mars teeters on occasion with a screenplay committed to delivering the genre goods as honestly as possible (lots of red herrings, dark rooms, shock cuts, and people popping into frame out of nowhere), but with its tin ear for dialog, luckily it has the good sense not to take itself too seriously.
Faye Dunaway, in the first of many suitable-for-a-drag-queen roles that would soon derail her once-impressive film career, is actually rather good here and is given solid support by a compelling cast of actors.
However, the film's greatest asset is its setting. Not since Blow Up has the world of fashion photography been used to such irresistible effect. Inspired by a real-life hot-button social issue of the late 70s: the emergence of violent, sadomasochistic imagery in fashion and advertising (specifically the works of Helmut Newton, Guy Bourdin, & Rebecca Blake), Eyes of Laura Mars makes colorfully dramatic use of the mystique surrounding the fashion industry. All of which creates a credible backdrop for its implausible, "I have an ocular/psychic bond with a serial killer!" gimmick.
Released three years before the debut of MTV, Eyes of Laura Mars can be credited or blamed with paving the way for the glut of  80s thrillers which endeavored to hide narrative shortcomings behind an overabundance of visual panache. Many have tried, but few have been able to hit all the high notes that Eyes of Laura Mars does so effortlessly. A stateside version of the Italian "Giallo" thriller, it is at times loopy, obvious, and heavy-handed, but there are still enough surprises to go around and it is never for one second, boring. In fact, it's really a lot of lurid fun.
WHAT I LOVE ABOUT THIS FILM
Not everything one loves about a film is actually up on the screen. Sometimes it's what we associate it with and what memories it evokes. Every time I watch this movie I think of the summer of 1978: the year I turned 21 and moved to on my own. One of my strongest first impressions of the city was the enormous Eyes of Laura Mars billboard on the Sunset Strip.
It was the same iconic Scavullo portrait of Dunaway used in the poster, but the staring eyes were illuminated and flashed on and off 24/7. It could be seen from blocks away and I was just thunderstruck by it. Seriously, it was like some 70's reimagining of The Great Gatsby with me as a bell-bottomed George Wilson mesmerized by the eyes of a female Dr. T.J. Eckleburg staring down from an advertisement. 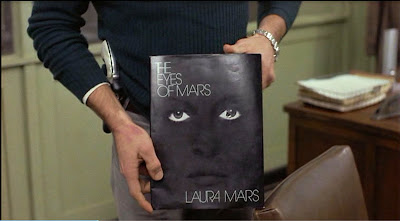 PERFORMANCES
It's not easy being a Faye Dunaway fan. When she's good she's peerless, but unless handled by a particularly watchful director, she's prone to giving overly mannered performances (one recalls Jan Hook's hilariously spot-on Dunaway impersonation on SCTV). Hot off of her Oscar win for Network and in the first role requiring her to truly carry a film, Dunaway falls somewhere in between here.
My absolute favorite performance in the film is given by Darlanne Fluegel, portraying a sweetly ditzy model of the sort I once thought exclusively indigenous to . Hers is a disarmingly smart and funny performance keyed perfectly to the semi-satiric tone the film adopts for the modeling sequences. She is terrific.

THE STUFF OF FANTASY
Were this thriller comprised solely of fashion shoot sequences and behind-the-scenes footage of Laura Mars at work (in some of the most flamboyantly impractical outfits ever), it would be enough.
Each scene plays out like a little mini-film: kinetic, witty, and bubbling over with an unerringly precise sense of time and place. Unlike laughable sequences in movies like Valley of the Dolls that try to make modeling look glamorous and desirable, Eyes of Laura Mars is not afraid to mine the absurdity. 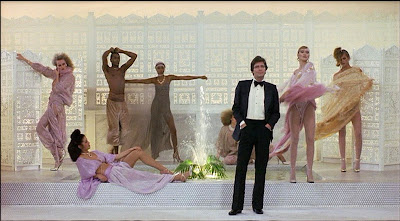 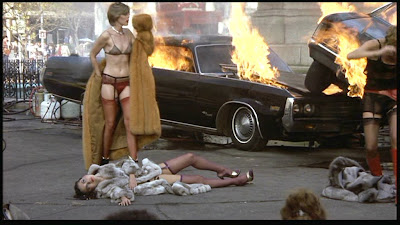 THE STUFF OF DREAMS
As a time capsule vision of late 70s chic, Eyes of Laura Mars is perfection (although the once-daring photos at the center of the plot look almost quaint by today's standards), which only adds to my overall enjoyment of a film that, for all its faults, continues to fascinate and entertain me through repeated viewings. Still, given the relative kinky cleverness of the premise, I might wish that the film's potential was better realized in the script. I don't usually need everything spelled out for me, but it does nag at one to have interesting ideas introduced and never expanded upon.
For example, I'm not sure it's ever explained why/how Laura came to share the killer's "eyes" and what, if anything, it all signified in relation to her photographs. Also, as the film progresses, Laura's attitude towards violence seems to undergo a change and she becomes more squeamish about the glamorized bloodletting she had once defended. Does this mean that her earlier "moral" defense of her work has altered as well?

In the end, perhaps these kind of questions don't ultimately matter in a film so preoccupied with visual style.
What I do know is that Eyes of Laura Mars has been one of my favorite films for the last 33 years.
A statement I proudly make without benefit of excuses, apologies, or rose-colored glasses...just with my eyes wide open. 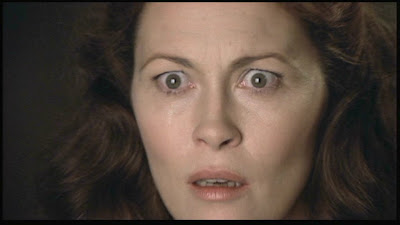