I know of many parents who indulge their young children - always sons, for some reason - by allowing them to watch PG or R-rated horror films and aggressive, comic-book action movies. In each instance the parent is quick to point out that it's always at the child's insistence, and (being the good parents they are) should things on the screen start to get hairy, they're at their kid’s side, reminding him it's all just fakery and only a movie. A sort of Parent's Magazine reversal of The Ludovico Technique from A Clockwork Orange, I guess. Terrific. More kids desensitized to, and made tolerant of, depictions of violence and brutality.
Since a great many of the films that have meant the most to me were films deemed "mature" for my age when I first saw them (Who's Afraid of Virginia Woolf?- age 11,  Midnight Cowboy - age 12), I obviously don’t have a problem with young people being exposed to so-called "age inappropriate" movies. However, I do have two problems with the scenario described above, wherein a film's artificiality has to be routinely reinforced in order to stave off kindertrauma.
1) Movies are one of the few realms of fantasy that life still affords us after we reach the pragmatism of post-Santa Claus/Easter bunny adulthood. It thus seems a shame to rob a child of the transgressive magic of film by hammering them over the head with reminders of its contrivance. Yes, movie images are indeed "fake," but the emotions those fake images are capable of evoking are not. One's emotional response is the only real thing about the filmgoing experience. To watch something and be encouraged not to respond emotionally to what you see suggests training a child to be impassive and cut off from his feelings. 2) Why are the mature films these kids allowed to see always these loud, violent, brainless, ADD inducing, explosion-a-thons and never movies that promote empathy and sensitivity to the human condition?
Films like They Shoot Horses, Don't They? (which I saw when I was 12) should be mandatory viewing for all adolescents and a great many adults. A gut-wrenching contemplation on the fragile durability of hope in the face of life's ostensible futility, They Shoot Horses, Don't They? uses the allegorical setting of a grueling dance marathon set in Depression-era Hollywood (all the participants seem to be wannabe movie stars) to look at the devastating ways in which the human necessity to connect is so often thwarted by the equally human need to erect walls of defense to shield ourselves from the pain of living.
They Shoot Horses, Don't They? is framed around a deceptively simple, character-driven plot - two dissimilar dreamers in 1932 are thrown together by fate (the embittered, pessimistic Gloria and the naively good-natured Robert) to tragic effect. By placing the action within the unfamiliar, almost freak-show atmosphere of a marathon dance contest whose chief requirements are desperation and a masochist's tolerance for pain, the film makes many perceptive, still-relevant points about the way the dangling carrot of hope can be used to manipulate and exploit those most vulnerably in need.

WHAT I LOVE ABOUT THIS FILM
Nathanael West's The Day of the Locust and Horace McCoy's They Shoot Horses, Don't They? both cast 1930s (as embodied by the movie industry) as a Lilith leading men to their doom, but the films adapted from these novels differ significantly. While I love both movies, there is something so humane about director Sydney Pollack's approach to the material that makes it the more compelling piece. The penny-ante aspirations of the protagonists are never belittled, nor are their character flaws looked upon with anything other than empathy for the suffering that lay at their core.
If the characters in The Day of the Locust are rendered grotesques due to their ofttimes willing surrender of their souls to valueless dreams; the dreamers in They Shoot Horses, Don't They? are guilty of little more than being misguided in their fruitless, potentially hopeless, quest for something to believe in.

They Shoot Horses, Don't They? represents the best film work of virtually every member of its talented cast, but the recent deaths of co-stars Susannah York and Michael Sarrazin add an extra layer of poignancy to two performances that already significantly tug at the heartstrings. Portraying two Candide-like innocents left broken and disillusioned by what could best be called the neutral cruelty of existance, the impossibly young duo are agonizing in their vulnerability and both give memorably moving performances.
Gig Young, whom I had heretofore only known as an annoyingly glib presence in smirky sex comedies from the '60s, gives one of those naked, laying-it-all-on-the-line performances (like Ann-Margaret's in Carnal Knowledge) that seems to give vent to years of frustration at being a talent underutilized.

The same can be said of Jane Fonda, who functionally changed the course of her career with this film. Though perhaps a tad too beautiful and angularly delicate to physically embody the life-hardened heroine of McCoy's novel (imagine Ann Savage from 1945's Detour), Fonda is nonetheless emotionally right on target and gives off an edgy electricity that jumps off the screen. Hard-bitten and brittle, nervous and as alert as a junkyard cat, Fonda is impossible not to watch.

The only movie I know of to use 's short-lived marathon dance phenomena for a dramatic backdrop (I'd never even heard of a marathon dance before I saw this), They Shoot Horses, Don't They? confines itself almost exclusively to a single indoor set, yet still manages to be vividly cinematic. Employing an intimate, if not invasive, shooting style that makes imaginative use of hand-held cameras, a stiflingly claustrophobic environment of a precise time and place is evoked in a way that never once feels stagy or set-bound.

THE STUFF OF DREAMS
I have seen hundreds of films over the years, so it doesn't surprise me that I've forgotten so many. But what does surprise me (as the years pile up) are the films which have never left my mind, and the images that remain as clear to me now as the day I first saw them.
Which brings me to the incredible "derby" sequence: a virtuoso bit of filmmaking employing music, fast cuts, and dizzying hand-held camerawork to create one of cinema's most powerful visual representations of hopeless desperation. It's my absolute favorite scene from the film.
In 1969 the use of slow motion hadn't yet become the movie cliché it would eventually grow into, so the agonizingly protracted sequence depicting a cluster of over-fatigued individuals racing in a circle to a discordant calliope arrangement of the optimistic anthem "California Here I Come" (thus rendered a perverse, human merry-go-round), was an image so poetically grotesque, yet hypnotically beautiful, that I never forgot it.

They Shoot Horses, Don't They? is my idea of a truly "adult" film: a film of ideas and insight that compels you to be aware of and sensitive to the frailties of others. I can't attest to whether or not my youthful penchant for R-rated films ultimately did me more harm than good, but I'm glad that the mature films I did seek out were indeed that - films of maturity. I'd cried at movies before - at some sad action like Bambi's mother being killed or some hero shot trying to save his best friend, but They Shoot Horses, Don't They?"was the first film that made me cry just because the characters onscreen were so wounded and in so much pain. 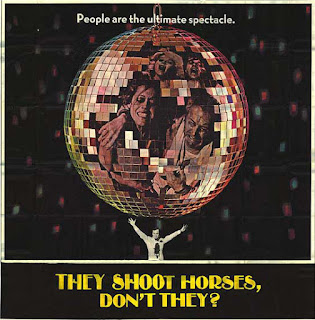