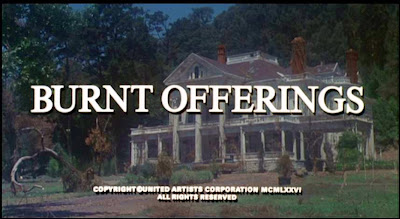 I’m not sure what a sociologist would make of it, but the '70s (that post- hippie “Me” decade of Watergate, the energy crisis, and the close of the Vietnam War) seems to have spawned more than its share of movies and novels about malevolent domiciles. The Amityville Horror (1979), The Sentinel (1977), and The Shining (1980) are all films based on popular '70s horror-fiction novels that sought to update the traditional haunted house story.

Burnt Offerings, Robert Marasco’s 1973 novel chronicling the gradual dissolution and ultimate destruction of a family after they take up temporary residence in a large house possessed of a deadly supernatural force, predates Stephen King’s similarly-themed The Shining by four years. I read Burnt Offerings back in 1975, as soon as I’d heard that it was to be adapted into a motion picture reuniting Karen Black with Dan Curtis, the director of the popular TV-movie, Trilogy of Terror (1975).
The involvement of Dan Curtis—the man behind the long-running Gothic TV soap-opera Dark Shadows, and a TV-based director/producer who never met a horror-cliché he didn’t like—was considerably less promising to me than the possibilities presented by the top-drawer cast assembled (always such a rarity in horror films). Karen Black, red-hot at the time, was cast as the wife; Ken Russell alumni Oliver Reed, fresh from the success of Tommy (1975), was the husband, and veteran star Bette Davis was rescued from TV-movie hell to bring her What Ever Happened to Baby Jane? / Hush… Hush, Sweet Charlotte scream-queen gravitas to the small role of Aunt Elizabeth. Rounding out the intriguing cast were Oscar-winner Eileen Heckart and indefatigable hambone Burgess Meredith as the eccentric owners of the parasitic (vampiric?) summer rental at the center of the story.
On its release, I was happy to find Burnt Offerings to be a serious-minded, slavishly faithful adaptation of the book (with the exception of a more cinematic, crowd-pleasing ending) that avoided the usual post-Exorcist bombast and instead concentrated on mood and atmosphere. It's one of those rare films that can give you a good, solid scare when you watch it alone, yet provide plenty of unintentional laughs when you watch it with friends. Contemporary audiences are likely to find the film predictable, slow, over-reliant on tried-and-true clichés (there should be a moratorium on rainstorms in haunted house movies), and hampered by the kind of empty ambiguity that often signals poor storytelling. But those who saw Burnt Offerings when they were very young (the film was rated PG) or before The Shining and the Amityville series drove the genre into redundancy, tend to recall the film with the most fondness today.


A film critic once compared the horror genre to pornography (a '70s film critic...long before the genre's decline and the arrival of those wretched "torture porn" movies) making the point that no matter the flaws, porn films work if you find them exciting, and horror films work if they are scary. Is Burnt Offerings scary? Had I seen it as a ten-year-old, I would say most emphatically yes. Seeing it as an adult, I can't say it scared me so much as it entertained me in a way that encouraged my suspension of disbelief to just sit back and have fun with it all. Perhaps it's due to Curtis having developed his "style" from years working in television,  but the PG-rated Burnt Offerings feels less like a feature film and more like an expanded episode of the TV show Night Gallery (a program Curtis criticized for its poor writing). Burnt Offerings is more a well-told mood piece than a good scary movie. (Perhaps the scariest and most unsettling thing is how this family considers it a "vacation" to spend their entire summer working harder than most people do all year. Even before the house starts acting up, all they do is clean!) However, ask someone who saw Burnt Offerings as a kid and they'll tell you it was the scariest film they ever saw...the stuff of nightmares.

WHAT I LOVE ABOUT THIS FILM
One of my favorite things about Modern Gothic is when the horror is portrayed as an external manifestation of some form of inner turmoil in the characters. As in The Shining (and more successfully, if in a slightly different vein, Ira Levin’s Rosemary’s Baby), Burnt Offerings nicely grafts familial dysfunction onto the conventions of the haunted house genre to create an eerie sense of tension both supernatural and psychological. When one really watches how the Rolf family interacts, it's easy to imagine that perhaps the "right people" the Allardyces seek for the house are ones living under a pressure cooker of repressed frustrations and barely constrained hostilities. 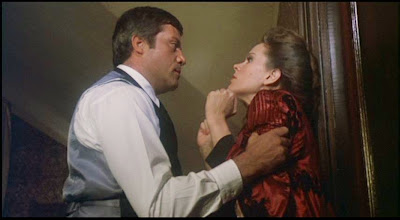 From the very first moments we meet the Rolfs, one gets a sense that all is not exactly well with this family. Pragmatic Ben and over-ardent Marian don’t really EVER see eye to eye before things begin to rapidly go awry between them. What is made explicit in the book (her domestic dissatisfaction, his creeping fear of mental illness) is only hinted at in the film, but the keen performances by Oliver Reed and Karen Black shore up the sense that the house doesn't really change these people, it merely amplifies that which is already there.

PERFORMANCES
Always one of my favorites, screen legend Karen Black may not have been able to sustain the kind of career she once had at the peak of her '70s popularity (the partial blame for which she subtly lays at the feet of Burnt Offerings director Dan Curtis in the comically discombobulated DVD commentary for this film), but there are few actresses who can boast of having starred or appeared in as many films that have gone on to attain classic or cult status. 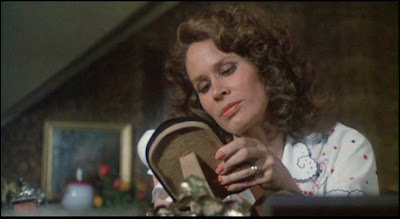 Black’s boom years were 1974 to 1976, a period in which it was near-impossible to avoid her on the big screen or television (her performance of Big Mama Thornton's “Hound Dog” on The Tonight Show is burned in my brain to this day).  The uniquely glamorous, off-beat, unofficial face of The New Hollywood, the ubiquitous Karen Black appeared in a staggering 10 feature films and TV-movies in these three years, among them, some of the biggest and most high-profile releases of the era: The Great Gatsby (1974), The Day of the Locust (1975), Nashville (1975), and Family Plot (1976). And of course, one cannot forget Airport 1975, a film so iconically silly that the line of dialogue “The Stewardess is Flying the Plane!” was made into the title of a book about films of the 1970s.

THE STUFF OF FANTASY
The central gimmick of Burnt Offerings is that the house renews and repairs itself with every injury, drop of blood, or instance of physical or spiritual decline it can extract from its inhabitants. Dan Curtis’ television-trained penchant for close-ups and tight framing robs the film of the kind of visual scope necessary to make the scenes of spontaneous regeneration really pay off, but his claustrophobic eye is well suited to building a sense of dread out of a million little isolated details. Not all of them followed through with or given a payoff.

Because I so enjoy a good scare at the movies, I’m almost ridiculously willing to suspend my disbelief if it better ensures a solid payoff at the conclusion. On that point Burnt Offerings delivers mightily; it has a great final act. But a movie has to work with me. I can accept the most outlandish plot machinations if a character's actions and motivations follow even a marginally identifiable pattern of a recognizable human behavior. As soon as characters go off doing patently stupid things just to advance the plot, well, then you lose me. 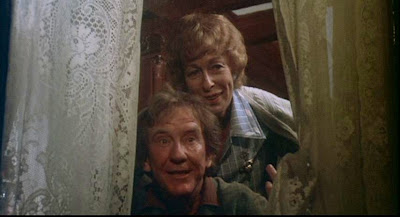 To its credit, Burnt Offerings plays it smart most of the time. For example: to better counterbalance the swift susceptibility of the Karen Black character (who is sympathetic, if ultimately hard to relate to) and get the plot moving despite everything about the initial setup screaming, “Don’t rent that house!”, Oliver Reed’s dialog mostly has him giving voice to every doubt the audience is thinking. This is a great device that subtly pulls you in with presuming that if a character at least acknowledges something smells fishy, you're more likely to stick it out when they inevitably start disregarding common sense and doing all the wrong things.

Burnt Offerings is not a great horror film, but it's a good one that I enjoy rewatching a great deal. Not scary so much as eerie, Burnt Offerings plays like a supernatural parable on the risks of being controlled by one's possessions. Anyone who's ever owned a car, a home, or property can relate to feeling at times as if repairs, taxes, upkeep...the whole desire to acquire things.... can easily dominate one's life. That one is living one's life at the will and behest of the things we sought to possess, but which ultimately come to possess us. 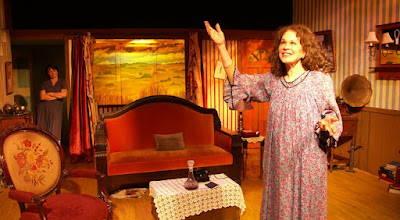 Oh, and as for my Karen Black obsession: in spite of her having filmed Burnt Offerings near my family's house in Oakland, and the previous year filming Hitchcock's Family Plot in San Francisco where I attended college, I never once made the effort to catch sight of her on location. Thirty years later, in Los Angeles in 2007, I finally had the opportunity to meet the object of my teen fascination when I went to see her in her self-penned musical play Missouri Waltz. When it came time for the post-performance meet and greet in the lobby, she was a real sweetheart, and I was near speechless. But boy, you should have seen her face when someone held out a poster of The Day of the Locust for her to sign (not her favorite movie), it was like one of those looks she shoots Oliver Reed when she has to rescue him from the attacking vines!