A perhaps apocryphal story goes that Fox Television's insanely funny sitcom, Arrested Development was not more popular in the ratings and ultimately canceled because its rapid-fire jokes and almost subliminal sight-gags required viewers to actually pay attention. Whether true or not, it's a theory hard to dismiss when applied to the career of Robert Altman (a director a little over-represented on this blog, I know, but it's his fault, not mine. He was just too damned good). In a career as varied and immune to meeting expectations as Altman's, I don't think it's coincidence that his most straightforward, structurally conventional films—M*A*S*H, The Player, Popeye—have been his biggest hits, while his most intriguingly imaginative works have been critic's darlings but largely ignored by the populace at large.


Altman's fondness for multiple storyline, character-based films with large ensemble casts and overlapping dialog just demanded a level of audience engagement that was rapidly going out of style with American moviegoers. (2001's , which fit the above criteria, was a huge success for Altman. An occurrence attributable to the fact that by then the 76 year-old director and his trademark style had grown as cozily familiar and commodified as Hitchcock's.)


In 1975, American movie audiences - smarting from Watergate, inflation, the oil crisis, and the Vietnam War - showed its first signs of wearying of Hollywood's "auteur" era and its films which strove to straddle the broad chasm of commercial and art. It took the blockbuster success of Jaws (released the same summer as ) to unceremoniously put an end to 's brief love affair with "difficult" films that challenged and/or affronted; and audiences, speaking with their boxoffice dollars, made it known that they were in the mood to be reassured and comforted at the movies again. Whether it be with imaginative retreads of familiar genres of the past (Star Wars, Rocky) or remakes of past successes (A Star is Born, King Kong), was just sick and tired of being asked to think and pay close attention at the movies all the time.
Nashville, Robert Altman's kaleidoscopic vision of America as reflected through the interconnected stories of 24 characters over the course of 5 days in America's country music capital, was filmed in 1974, the year Richard Nixon resigned from the Presidency; and was released in 1975, one year before the U.S. Bicentennial—which also happened to be an election year.


With one foot planted in an era of scandal and disillusionment, and the other poised on what could be the threshold of a renewed optimism and nationalistic stock-taking; Nashville (unquestionably one of the most timely films ever made) rather ambitiously set about giving the country an eyeful of itself. No one was expecting a red, white, & blue love letter from cinema's most acerbically cynical liberal, but Nashville's equating of politics with the phony, image-conscious flimflammery of show biz (the familist, piety-spouting, grassroots show biz of country music, at that) was a cautionary "Not so fast, America" hand raised to the nation's looming steamroller of ego-bolstering, rah rah, Bicentennial back-slapping.
The traffic jam which opens the film and the political rally that closes it are the only sequences that gather all the main characters of the film together in one site.

WHAT I LOVE ABOUT THIS FILM
may not be THE view of , but it's most certainly A view of , and like it or not, it's a vision that proves itself more prescient and relevant with each passing year. The first and best of Altman's films to use the multiple-plot format he would later employ in A Wedding, H.E.A.L.T.H., Short Cuts, Pret-a-Porter, and Gosford Park, Nashville is staggering in its deft handling of the myriad shifts in tone and changes in focus required of this genre. I can't think of another director capable of balancing such disparate elements in a free-flow mélange of comedy, drama, tragedy, and social satire.

Some of the more affecting story threads:


PERFORMANCES
Of all the terrific performances in Karen Black as Country Western queen (and  Barbara Jean rival) Connie White is my favorite. The goody-goody, over-coiffed prom queen look of so many country stars of the era —and typical of every female performer on The Lawrence Welk Show— has always seemed too calculatedly homespun to me, so I love that screenwriter Joan Tewkesbury envisions Connie White... all cotton candy hair and sweet as sugar smiles...as a steely, professional phony with a rapier-sharp competitive streak. Although her role is one of the briefest, the ever-resourceful Karen Black does some wonderful things with the smallest moments. She's hilarious but never less than spot-on authentic in every move she makes (check out how she avoids acknowledging the gift Barbara Jean's husband tries to give her). Watching her is like taking an actor's master class in bringing a character to life.


THE STUFF OF FANTASY
The music in is so good and plentiful that it's a pity a full, complete soundtrack album has never been released. You don't have to be a fan of country music to enjoy the witty and sometimes surprisingly beautiful songs that play wall-to-wall throughout the film (many of which were composed and performed by the film's cast). In fact, so much of country music seems knowingly self-parodying that it's hard to tell the songs that are gently poking fun at the genre (like the self-serving moralizing of Haven Hamilton's "For the Sake of the Children") from the ones that sound like they could be the genuine article (Barbara Jean's rousing [but technologically dated] "Tapedeck in his Tractor").

THE STUFF OF DREAMS
When it comes to a film like , there can never be too much of a good thing. I can barely stand to dwell on the fact that some 16 hours of footage was originally shot and whittled down to 159 minutes. My only hope is that some company will make good on the long-promised DVD that will feature deleted scenes and omitted songs.

What I find fascinating about is that no matter to what degree the passage of time  dates the fashions, furnishings, cars, and music, everything else about the film is disconcertingly up-to-date and of the moment.

I think it speaks well of the brilliance of everyone's work involved that you can extract any single character or situation and find a contemporary correlative. When I look at , it surprises me how much Altman's intimate style and respect for what is extraordinary in the ordinary person, anticipates today's fascination with reality TV. Similarly, the lure of pop stardom (Sueleen and Albuquerque) and the very American desire to re-invent oneself (Shelley Duvall's airheaded changeling, L.A. Joan, nee Martha) find their modern parallel in image-based celebrities like Lady Gaga and assembly-line superstar factories like "American Idol."

Without question, the most dispiriting evidence of Nashville's ahead-of-its-time/up-to-the-minute grasp of cultural zeitgeist is in its foreshadowing of an era where the line between celebrity and politics becomes inextricably blurred.  A time when the senselessness of assassination (a heinous but somehow socially assimilated atrocity due to its exclusive connection to political, religious, or ideological motives) spills over to include any public figure (John Lennon, tragically) so long as it serves to propell the assassin to worldwide notoriety. As we keep learning from TV and the Internet, each of us Americans has a God-given right to be famous. At any cost.

is a movie held in very high regard, yet it's one of those classic films that rarely airs on television. Which is odd, seeing how Altman's layered use of sound is tailor-made for today's advanced sound systems, and his eye for detail and full, busy frame compositions are perfect for all those super-sized  HDTVs. I sure would hate to think that this great film is so seldom screened because it just demands too much of our attention.

AUTOGRAPH FILES
I got these autographs from Tim (Keith Carradine) and Mary (Cristina Raines) back in 1979 when I was working at a Honda dealership in Los Angeles (hence the grease-stained paper given to Raines). 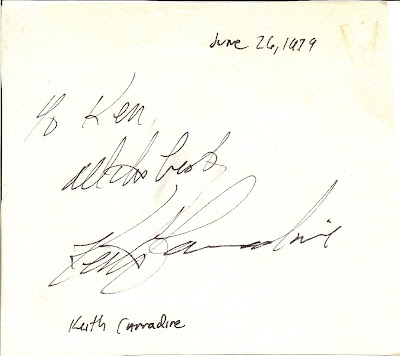 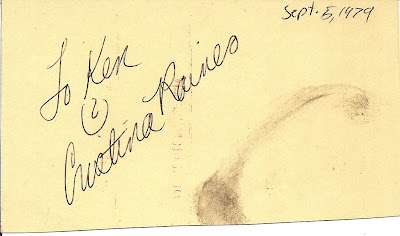