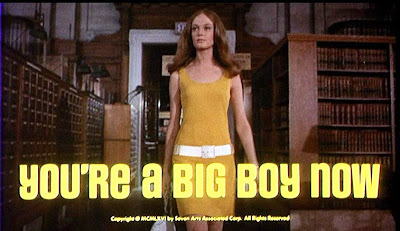 Coming-of-age films have always been with us, but they really came into their own during the youth-obsessed '60s. The post-Baby Boom "youthquake" of the '60s, which impacted American culture in ways both social and economic, was the perfect breeding ground for films pertaining to social rebellion, sexual awakening, and the challenging of authority. As a genre, coming-of-age films were tailor-made for the New Hollywood. A Hollywood desperate to court the new-found economic clout of the young through "personal" films populated with anti-heroes and comprised of romanticized depictions of the struggles of the post-adolescent set (almost always male). Given that coming-of-age films have also always afforded ample opportunities for sex, drugs, and the baring of female flesh, it's not surprising that Hollywood's old-guard sually rather reluctant to respond to change) proved so receptive to even the more way-out, avant-garde entries in the genre. After all, whether audiences be young or old, sex always sells.


Time has granted Mike Nichols’ The Graduate (1967) the uncontested title of representative coming-of-age film for a generation, but my favorite entry in cinema’s “pain of growing up” sweepstakes is this delightfully offbeat comedy from a young Francis Ford Coppola (only twenty-seven at the time). You’re a Big Boy Now was Coppola's first film for a major studio as well as his master's thesis submission to the UCLA film school, and as such, displays an engagingly youthful lack of discipline and the novice filmmaker's fondness for camera trickery...two things that don't exactly qualify as liabilities in '60s films.
You’re a Big Boy Now is about the misadventures of Bernard (scornfully nicknamed “Big Boy” by his self-centered father), a woefully under-experienced 19-year-old who, at the insistence of his father and against the protests of his obsessively over-protective mother, goes off to live on his own in Manhattan. Bernard’s naiveté and propensity to lose himself in flights of fantasy consistently get him into trouble as he attempts to navigate life and love along the bumpy path to adult independence.

Given how male writers and filmmakers never seem to tire of wistful, semi-autobiographical tomes hearkening back to the days of their sexual awakening; there’s never been a shortage of these “rites of passage” films to choose from. Indeed, one could probably fill an airplane hangar with them. Inherently similar in tone, most suffer from a kind of willful masculine myopia and gender fear which finds endless charm in the sexual fumblings of doltish, socially awkward, physically unattractive, emotionally superficial young men who nonetheless feel they rate the designated "dream girl" figure. Being the wish-fulfillment fantasies they are, our callow hero usually does get the longed-for beauty, but it’s a certainty that before the end credits roll, said dream girl will reveal herself to be somehow undeserving of his noble affections (take THAT pretty girls who snubbed the director in high-school!).
You’re a Big Boy Now doesn’t deviate far from this well-trod narrative path, but Coppola invests the proceedings with such creative exuberance (every scene holds at least one element of surprise - whether visually, verbally, or in the goofily straight/comic performances he elicits from his game cast), that the film feels more like a surreal satire of the genre rather than a representative of the genuine article.

WHAT I LOVE ABOUT THIS FILM
Providing, as it does, a subjective view of the overwhelming and perilous adult world as it's perceived by the sheltered Bernard, there is much to enjoy in the film's many eccentric visual flourishes, absurdist characters, and anarchic editing style. With its blaring (and rather good) score of pop songs by The Lovin' Spoonful, You’re a Big Boy Now is a '60s film to its core, complete with an overarching air of reproach directed at middle-class repression and sexual guilt.

The desirable, yet dangerous, female is as much a staple of the coming-of-age film as the virginal hero having a more sexually sophisticated best friend/adviser (in this instance, the appropriately unctuous Tony Bill). When it comes to scary women, You’re a Big Boy Now has probably the most disturbing, dick-withering example of that gynophobic archetype ever to come out of the free-love era: the man-hating, aspiring actress/go-go dancer, Barbara Darling. 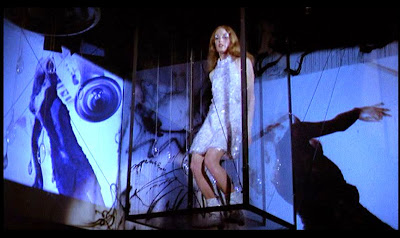 The character of Barbara Darling in less capable hands would be just another bitch-goddess cliché, but someone had the inspired genius to cast against type, and the late Elizabeth Hartman manages to be downright chilling, yet terribly funny, in the role. What makes her performance here so amazing is that I saw You're a Big Boy Now only after I had already seen Hartman in A Patch of Blue (1965), The Group (1966), and The Beguiled (1971); all roles emphasizing the gentle, almost fragile vulnerability of this immensely likable actress. Though obviously talented (she was Academy Award® nominated and won the Golden Globe for A Patch of Blue), there is nothing about her performances in any of those films that would lead you believe she could be so aggressively carnal and convincingly, psychotically, mercurial. In a transformation the likes of which I've rarely seen, the Elizabeth Hartman of her earlier films is nowhere to be seen in You're a Big Boy Now. She gives my favorite performance in the film.


THE STUFF OF FANTASY
You're a Big Boy Now has some great shots of Manhattan and New York's seedy Times Square area that predate the gritty images in Midnight Cowboy (1969) and Klute (1971). It's fun seeing theater marquees advertising films like Born Free and The Russians are Coming, The Russians are Coming. 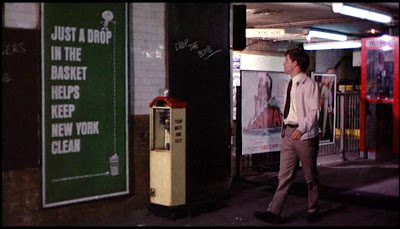 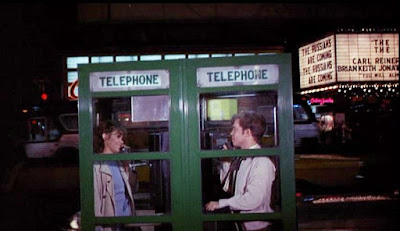 What's fun about watching the early works of accomplished directors is trying to catch a glimpse of some kind of nascent artistry or budding style that would later emerge as a defining trait or characteristic of their work. To look at the early films of Roman Polanski or Woody Allen is to see the beginnings of a style and preoccupation with themes they continue to bring to their work even to this day. 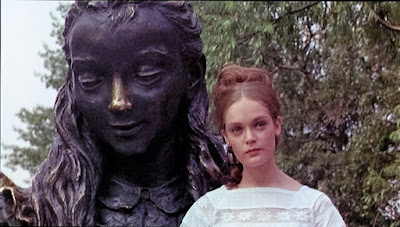 Watching You're a Big Boy Now, I was left with two thoughts: 1) with this film's pre-MTV kinetic rhythms, how is it that all of Coppola's subsequent musical outings (Finian's Rainbow, One From the Heart, and The Cotton Club) all turned out so flat?; 2) Coppola shows such a flair for comedy here, I'm surprised he hasn't had many more comedies on his resume.
Although You're a Big Boy Now is not a particularly well-known or talked about title today, Elizabeth Hartman and Geraldine Page were both nominated for Golden Globes for their performances, with Miss Page (married to co-star Rip Torn at the time) garnering an Oscar® nod as well. Best of all (for me, anyway, because I'm such a big fan) the film gave Karen Black her film debut. Pretty classy pedigree for a director's first major film. 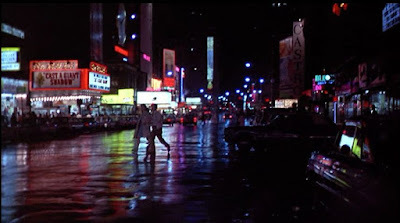