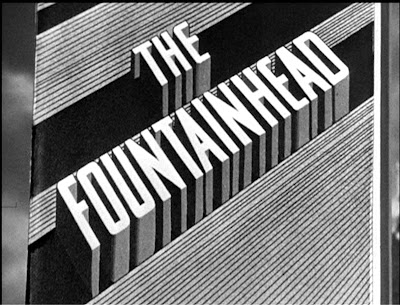 When it comes to The Fountainhead, I wish there was a way for me to return my mind back to the state of blissful ignorance I enjoyed the first time I saw this amazing film. That was many years ago. Back when The Fountainhead’s chief attractions for me were director King Vidor’s overripe, purple-prose approach to the material―a style always threatening to soar even more over-the-top than his notorious sex-and-sand opus, Duel in the Sun (1946)―and the overheated, over-emphatic screenplay by famed author, Ayn Rand, adapted from her hefty novel.

The plot of The Fountainhead: ruggedly individualistic architect Howard Roarke (Gary Cooper, still sexy, but looking a tad careworn at 47) doing battle against a world of cartoonishly single-minded villains hell-bent on commodifying his genius— was always less interesting than its presentation. What I took delight in was the dramatic persuasiveness of The Fountainhead applying a patently theatrical and artificial method of acting to a script of arch, over-embellished dialog, all in service of an extravagantly overwrought post-German Expressionist visual style. Ayn Rand’s verbose, almost feverishly nonsensical novel resisted any kind of realistic adaptation.  King Vidor, in never once rooting the film in any kind of recognizable reality, managed to fashion an compellingly excessive film that served her work well.


As a dyed-in-the wool visual aesthete whose lifelong relationship with film has been a battle with the influence of style over substance; I’m aware that my fondness for The Fountainhead has little to do with a sober assessment of its merits and faults. I’m nuts about the movie chiefly because it’s so visually striking and intoxicatingly stylized. I respond on an almost visceral level to how dazzling it is to look at, and I marvel at how closely the performances, in all their profound solemnity, hew so closely to that mannered, posturing style so expertly played for laughs in those old Carol Burnett Show movie spoofs. Indeed, in all of the areas where The Fountainhead seems to overplay its hand (it makes its points early and easily, then goes on to reiterate those same points, ad nauseum, scene after scene) I find I don’t fault the film so much as chalk it up to a particular type of broad-strokes, post-war American filmmaking.

The window of the past can do that…things you’d find unforgivably false in a film today look perfectly acceptable in a black & white film from the late '40s. 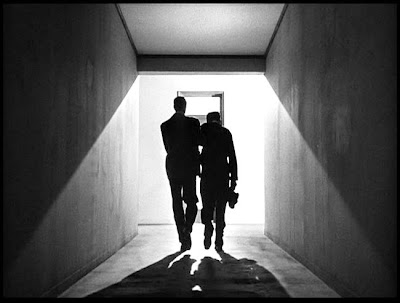 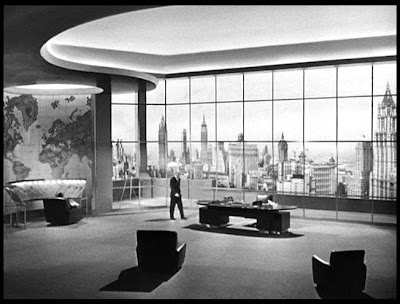 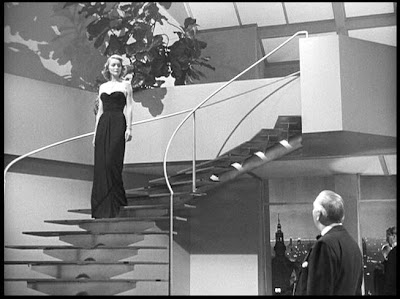 Well, that’s how things started for me and how things remained for some time. Unfamiliar with Ayn Rand or her philosophy (in any direct way), I was content to revel in The Fountainhead’s overwrought romantic melodrama and ravishing imagery with nary a thought given to its portentous themes. Themes that, even as a callow youth, struck me as slightly sophomoric.

When, many years later, I finally got around to reading The Fountainhead, I was actually surprised at what a windy polemic against Collectivism it was. I enjoyed the novel’s descriptive passages very much, and welcomed the fleshing out of the slim characterizations of the film, but its central plot was almost buried below a lot of ideological redundancies. It was nevertheless a book I enjoyed immensely, and, intrigued by Rand’s penchant for narrative overkill, I ventured forth and tackled her last and most famous novel, Atlas Shrugged. Bad move.
I won’t turn this post into a diatribe against Objectivism or the unfortunate adoption of Atlas Shrugged and Rand’s philosophies by America’s Tea Party Movement. But let’s just say that when it came to learning more about Ayn Rand’s philosophical beliefs, more was decidedly less.
WHAT I LOVE ABOUT THIS FILM
Before I had read The Fountainhead, it never crossed my mind that the film adaptation was, in some ways, little more than a visual-aid lecture on Objectivism. I just thought it was a great-looking movie saddled with an over-obvious, poorly-written screenplay. In viewing the film from Rand’s perspective, I can well imagine why she despised it; the power of King Vidor’s images overwhelm her words.
And it's a good thing, too, for The Fountainhead is a real “movie lover”s movie. And by that I don’t mean lovers of good film; I mean folks who love the stylized artificiality of film. Realism in film has its place, but films that attempt to speak to us through metaphor or symbolism (like Charles Laughton’s The Night of The Hunter) benefit greatly from an overabundance of cinematic stylization. The Fountainhead is such a film. It’s full of gorgeous cinematography; sumptuous sets; movie stars who look like movie stars; fabulous costumes, and soap-opera emotions. That none of it bears the slightest resemblance to human life as we know it only adds to its charm.

PERFORMANCES
I’ve always liked Patricia Neal. Her unadorned earthiness in Elia Kazan’s A Face in the Crowd (1957) and Martin Ritt’s Hud (1963) were the best things about those films. In a sea of lacquered, blonde bombshells, Neal was a home-grown Anna Magnani reminding us that sex appeal didn’t require a bullet bra and the disavowal of intelligence. Familiar only with latter-day Neal, imagine my surprise in seeing her at 22, given the full Hollywood-glam treatment in The Fountainhead, her second film. I had no idea she could be so stunning. 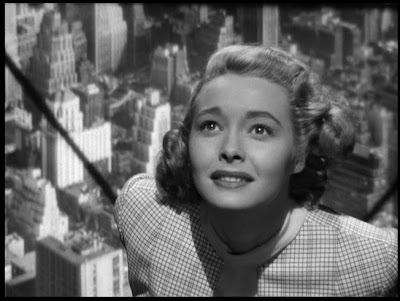 Cast as Dominique Francon The Fountainhead’s sole female character (was a time you’d have to open a novel by Sidney Sheldon or Jackie Collins to find a name like that), Neal is first seen heaving a Greek statue out of the window of her high-rise apartment because, “I wanted to destroy it rather than let it be part of a world where beauty and genius and greatness have no chance!” 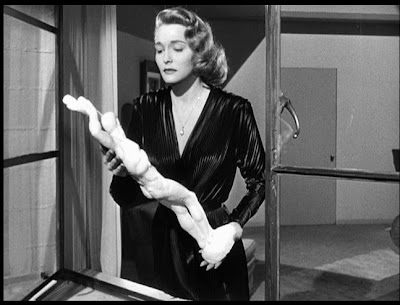 And if you think there’s not an actress on earth who can pull off dialog like that, well, you’re right. It’s just the first of several scenes where Neal strives mightily against some of the strangest human dialog ever committed to page. She’s not always successful, but she’s never less than fascinating to watch. Juggling numerous lovers and hard-to-fathom-motives, she manages to be glacially aloof and sexually agitated at the same time.
Dominique Francon is a woman of high ideals who, before finding her spiritual equal in the noble Howard Roark, feels frustrated at having to live in a world that worships mediocrity. She vents her frustration by engaging in behavior favored by smart and successful women to this day: she intentionally becomes involved with inferior men.
Her fiancé, the weak-willed Peter Keating, she chose because “He was the most safely unimportant person I could find.” She later weds hack newspaperman Gail Wynand to make good on her promise, “If I ever decide to punish myself for some terrible guilt, I’ll marry you.”
Dominique is nothing if not a gal with a few issues she needs to work out.

THE STUFF OF FANTASY
Shave off all the whiskers and fluff from Rand’s one-sided proselyting. and The Fountainhead is a pretty satisfying triangular love story with a few interesting things to say about society. The rather unconventional romance between Dominique and Howard (controversially incited in the novel by an off-putting rape, but, thanks to the usual stylistic obfuscation of sex in Production Code-era Hollywood, comes off in the film as the usual yes/no, male/female roundelay) is lent credence by the palpable chemistry between real-life lovers Gary Cooper and Patricia Neal. 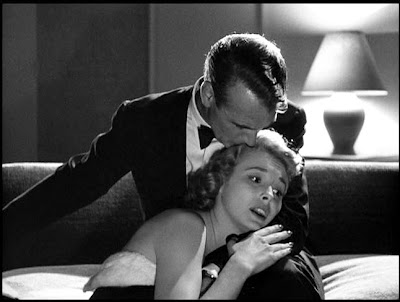 The rather salient points made by Rand about the dangers of a society committed to the lowest common denominator (are you listening Michael Bay, Vin Diesel and Adam Sandler?) lack the bite they might have due to the deck being so heavily stacked on the side of Roark and his philosophy . The story tilts so far in his favor there's almost no real conflict. Indeed, Gary Cooper (not the most expressive actor when it comes to dialog) is asked to reiterate his character’s position so often that it creates the effect of someone trying to convince himself of a argument, not others.

THE STUFF OF DREAMS
Living in Los Angeles, a city of agonizingly random architectural design, I can identify with all the heated discussions on design that take place in  in The Fountainhead.  Indeed, in establishing an analogical relationship to architecture and any creative endeavor which must struggle to maintain its personal integrity in the face of public opinion, The Fountainhead is at its most successful. In this age when individuals justify the most heinous points-of-view with the claim “I’m not the only one that feels this way!” (as if that was ever a gauge of honor), and when widespread ignorance is proudly defended as anti-intellectual-elitism, The Fountainhead should feel more relevant than ever. Unfortunately, Ayn Rand can’t seem to get out of her own way long enough to let the points she wishes to make stand on their own merits of logic. Like the character of Ellsworth Toohey, who feels he has to tell the public what to think, Rand doesn’t trust the viewer to weigh the issues of Objectivism for themselves. Rand's fondness for words fails to let the medium of film do what it does best; evoke, not explain. Rand's handling of her own work is all-too obvious. When I say The Fountainhead is black and white, I’m not just referring to the cinematography. 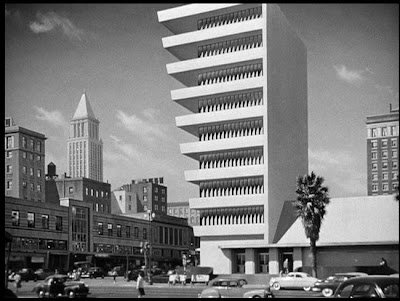 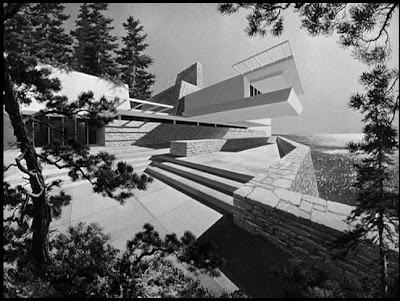 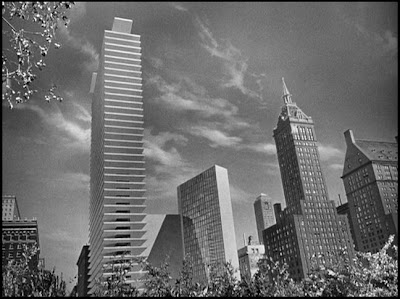 Ayn Rand wasn't fond of the architectural designs art director Edward Carrere used in the film. She wanted the buildings to reflect the works of Frank Lloyd Wright.

Watching the film today, it takes considerable effort to get my mind to relax and just let the movie entertain me as it did in the past. It feels like I spend the first ten minutes or so just trying to blot out the sermonizing. Mercifully, if I allow myself to focus on the sumptuous Max Steiner score (Gone With the Wind, Casablanca), and sink into Robert Burks’ rapturous cinematography (Vertigo, North by Northwest), pretty soon I’m back where I want to be. No longer a postulate at the lectern of Objectivism, just a movie fan enjoying a staggeringly gorgeous film. 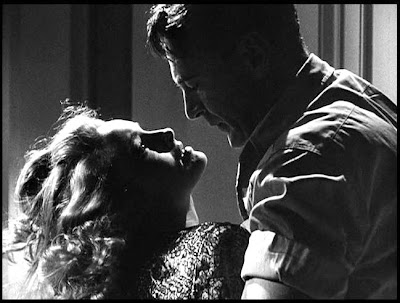