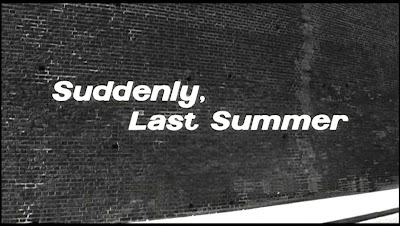 Watching Suddenly, Last Summer (adapted for the screen by Gore Vidal and Tennessee Williams from Williams’1958 play) it’s hard not to think about the frequency with which homosexuality=death themes crop up in Tennessee Williams’ works, and to wonder to what extent some gay artists have been subtly complicit in perpetuating damaging social perceptions of homosexuality.
In 1937 New Orleans (a year necessary perhaps to emphasize the infancy of lobotomy surgery, but not at all evident in the 50s-style clothes, hairdos, and make-up on display) super-rich widow Violet Venable seeks to secure— through not-so-subtle bribery—the services of groundbreaking psychosurgeon John Cukrowicz. Her objective is to have the doctor perform a lobotomy on her beautiful niece, Catherine, who apparently went insane the previous summer after witnessing the death of Mrs. Venable’s adult son, Sebastian.

The mysterious particulars of Sebastian’s death, life, and the reason behind Mrs. Venable’s wish to silence her niece, make up the narrative body of Suddenly, Last Summer. A film whose overarching Freudianism (intentionally or not) parallels closet homosexuality with everything from pedophilia and mother-fixation to sociopathology and flesh-eating prehistoric monsters.
If Tennessee Williams’ views on same-sex relations are unremittingly bleak, I suppose one can’t overlook the fact that Williams (of whom nothing I've read biographically would indicate a familiarity with love or happiness to any sizable degree) was nothing if not a product of his repressed, shame-based time. Raised in that bastion of open-mindedness, the American South, Williams (1911- 1983) had his greatest commercial successes during the '40s and '50s; a time when balanced/loving depictions of homosexuality would likely have resulted in his professional ostracism, if not incarceration. It’s a certainty that audiences at that time had no interest in seeing homosexuality portrayed as anything other than deviant aberration, but there’s no ignoring Williams’ willing participation in promoting this perspective. This in spite of Tennessee Williams being one of the few “out” public figures I can recall from my youth.

Expressly acknowledged homosexual characters appear in only a handful of this prolific playwright’s body of work: Cat on a Hot Tin Roof (Skipper, who commits suicide); A Streetcar Named Desire (Blanche’s husband Allan, also a suicide); and this, Suddenly, Last Summer (Sebastian, murdered and cannibalized). But wouldn’t you know it? They’re the works which have had the greatest longevity. (Tennessee Williams didn’t initiate popular culture’s tiresomely persistent association of homosexuality with death. In Lillian Hellman’s 1934 play, The Children’s Hour, a character’s mere suspicion that she might be a lesbian is enough to induce her to hang herself.)

There are those who believe it’s folly to look at old movies through a contemporary prism. While I think it’s important to keep in mind the cultural context and social time-frame of films, I also believe that all true art endures. And as such, one of the essential challenges facing any creative work to which the term "art" is to be applied, is its ability to withstand the critical application of changing cultural sensibilities.
Suddenly, Last Summer (my favorite of all the films adapted from Tennessee Williams’ plays) passes the test because its antipathetic attitude towards homosexuality merely mirror the film’s larger themes of nihilism. NOBODY in a Tennessee Williams film is ever having much fun. It goes with the territory.

“The dinosaurs are vegetarian… that’s why they became extinct. They were just too gentle for their size. And then the carnivorous creatures, the ones that eat flesh...the killers… inherited the earth. But then they always do, don’t they?”

“Life is a thief. Life steals everything.”

“Mr. Venable was a good man, but dull to the point of genius.”

“Of course God is cruel. No, we’ve always known about Him. The savage face he shows to people and the fierce things he shouts. That’s all we ever really see or hear of him now. Nobody seems to know why.”
PERFORMANCES
My admiration for Elizabeth Taylor is well documented in the blog posts for Who’s Afraid of Virginia Woolf? and Reflections in a Golden Eye. The real surprise for me here is how much I was impressed by Katharine Hepburn. Never one of my favorite actresses, here all of her starchy mannerisms and stylistic affectations have been put to fine service in helping to flesh out the marvelously complex character of Violet Venable. As the domineering, cold-hearted mother who is willing to go to monstrous lengths to protect the reputation of her son, Hepburn could have easily played the brittle, icy card exclusively and her performance would still have been a marvel. What she does that really blows me away is convey, through wounded, frightened looks and a barely-perceived sense of grasping desperation; her character’s achingly lonely, desolate life. In the film’s final moments, when it becomes clear that the obsessive, stifling love of Mrs. Venable’s life never loved her at all, her character’s complete and absolute despondency is heartbreaking.
Katharine Hepburn’s entrance in the film has to be one of the great screen entrances of all time. Descending from the ceiling in an ornate, cage-like elevator, Mrs. Venable addresses the surgeon she has summoned to her home:
“The Emperor of Byzantium, when he received people in audience, had a throne which during the conversation would rise mysteriously in the air to the consternation of the visitors. But as we are living in a democracy I reverse the procedure; I don’t rise, I come down.”

It’s very nearly my favorite moment in the film.

THE STUFF OF FANTASY
When I was small, I remember my older sister telling me that Elizabeth Taylor and Montgomery Clift were really the same person, and scenes and photos of them together were accomplished through split-screen special effects, like on The Patty Duke Show. For a while I actually believed her… although now it occurs to me that I never asked which of the two was the original article.

In the three films they made together (A Place in the Sun, Raintree County, and Suddenly, Last Summer) the dark, strikingly similar beauty of Taylor and Clift always insinuated a kind of spiritual kinship between their characters. A quality used to deeply empathetic effect in Suddenly, Last Summer. When Catherine first meets the doctor, we immediately sense (as does Catherine) that there is something the two share that makes it possible for him to so quickly allay her fear and apprehension. 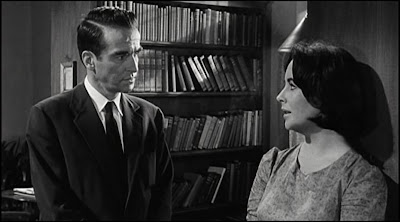 It also doesn't hurt that the duality of Taylor and Clift provides subtle subtext to Mrs. Venable’s frequent assertions that her son Sebastian (so taken with Catherine’s exploitable beauty) would have been “charmed” by the young doctor. Although we never see the much-discussed Sebastian, Mrs. Venable is quick to note of Dr. Cukrowicz “You’re very like him,” and “Your eyes, so like his.”
(When informed that the word Cukrowicz is the Polish word for sugar, Mrs. Venable wastes no time in referring to the the physician as Dr. Sugar; although from her tone it’s impossible to ascertain if it’s said in a friendly or mocking manner.)

The image of homosexuality Tennessee Williams presents in Suddenly, Last Summer may be grotesque to an almost preposterous degree, but I happen to like how it fits with the film’s themes of duality and displacement. In this context, homosexuality is the ultimate attraction of self. As manifest by the self-loathing poet, Sebastian, the allure of the similar (similar dark beauty, similar refined tastes, similar pitiless view of humanity) is a hunger unfulfilled. Named for the martyred saint whose portrait dominates his studio, Sebastian’s  face is never shown, but we know his clothes perfectly fit his male cousin George, and that George (equally as dark as Dr. Cukrowicz and his sister, Catherine) looks from the back, remarkably like Sebastian.

THE STUFF OF DREAMS
I really love the structure of Suddenly, Last Summer. On first viewing, it’s a puzzlingly bizarre Freudian murder mystery that grows increasingly dark and perverse as it leisurely wends its way towards its satisfyingly astonishing payoff. On repeat visits, the enjoyment derived from Suddenly, Last Summer come from the many fascinating existential questions the film poses about God, humanity, and the nature of evil.

People frequently look to nature and, upon witnessing the brutal dance of carnage and death in the animal world, defend its neutrality. It’s the cycle of life; it can’t be characterized as evil because animals only kill out of hunger and a will to survive. Throughout all of nature (plant life: the carnivorous fly-trap; animal life: Mrs. Venable’s witnessing of the sea turtles devoured by carnivorous birds) unspeakable violence, brutality, and the strong feeding on the weak, is accepted as random, blameless, and part of natural law.
Suddenly, Last Summer sets forth the provocative suggestion that man is just a sophisticated, complex animal. As primitive as the plants in Sebastian's nightmare garden. The hungers that drive man may be more complex, but are they just as elemental and necessary to survival as those of any carnivorous plant or four-legged beast? If man has a base hunger for love, a fear of loneliness and a need for human physical contact...aren't the feeding of these hungers simply natural acts, no less elemental than the will to survive? Should man engage in barbaric acts of cruelty and violence to feed these needs, could it be possible that God can be looking down upon it all with the same blameless neutrality we ascribe to nature? Suddenly, Last Summer is an allegorical rumination on the disquieting interchangeably of the words "devour" and "use" for the word "love."
That Tennessee Williams and Gore Vidal do such an eloquent job dramatizing such intriguing philosophical concepts is one reason why I’m able to (begrudgingly) overlook the patina of homophobia calcifying along the film’s edges.

But perhaps if I'm really being honest with myself, the one reason, above all others, for Suddenly, Last Summer remaining an all-time, lasting favorite-  it is the absolutely breathtaking Elizabeth Taylor 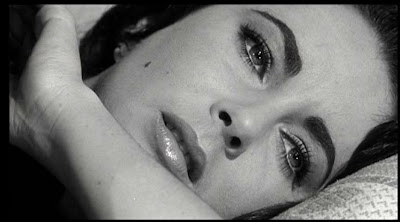 ...the last of the great movie stars.