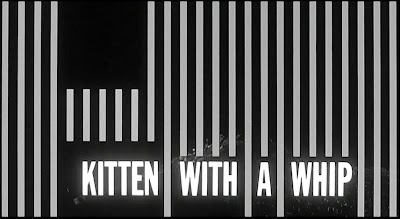 Ann-Margret in her 1994 memoir, “My Story”:
“My performance in ‘Kitten’ was so gritty and intense audiences were confused. They preferred me as the innocent sweetheart in ‘Birdie’ (Bye, Bye Birdie). The same problem frustrated Elvis; people didn’t want us to change.”

Allow me to qualify the above quotation:
“My performance in ‘Kitten’ was so gritty and intense audiences were confused”
Only if by “gritty and intense” she means “artificial and hyperactive.”

“They preferred me as the innocent sweetheart in ‘Birdie.’”
We preferred something resembling recognizable human behavior.

“The same problem frustrated Elvis; people didn’t want us to change.”
Diversity was not exactly their strongest suit. Ann-Margret didn’t really begin acting in film until “Carnal Knowledge” in 1971. 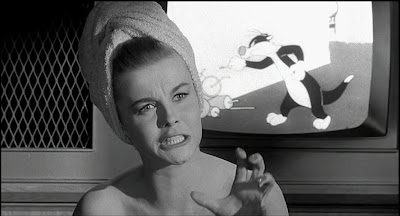 I’m a major, MAJOR fan of Ann-Margret. Like most people my age, the first time I ever laid eyes on her was in Bye Bye Birdie (1963). The staggeringly eye-popping image of her sashaying towards us in a skintight dress (ever-present wind machine blowing her orange mane) in a limitless blue void, singing the title song …well, it launched a thousand puberties.
In this and every subsequent film of hers in the 60s, Ann-Margret mined a paradoxically wholesome/smutty glamour of dizzyingly kinetic female hypersexuality of the sort I’ve literally never seen before or since. Bouncing about the screen in impossibly high heels, wiggling her rump, undulating her bosom, and tossing her hair about in absolute abandon; Ann-Margret was in-your-face, aggressively sexy. She was also resoundingly camp. Cross an over-the-top female impersonator with Lola Falana and Joey Heatherton on speed, and you’re still not likely to get an appreciation of the full-tilt atomic sex-bomb that was '60s-era Ann-Margret. 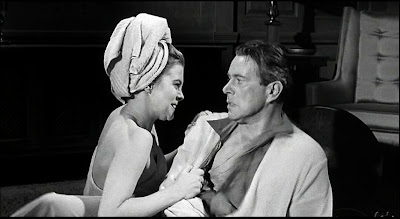 Energy and star quality personified, Ann-Margret, unlike the sex symbols of the 50s, wasn’t coy about her allure. Indeed, she seemed to so revel in her vivacious (voracious?) sex appeal and took so much bawdy pleasure in her own body that she never seemed to need anyone else. What man could keep up with her?  Outside of Elvis Presley in Viva Las Vegas (1964), no other male co-star ever looked like they could spend an evening with Ann-Margret and come out alive. 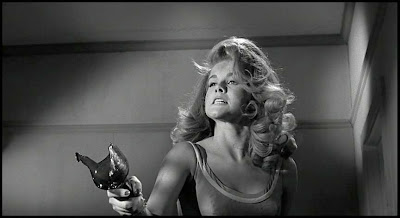 As much as I took delight in watching Ann-Margret on screen and on her TV specials, I have to admit that I never quite knew if she was putting us on or not. Her brand of femininity was so far out on a limb that I could never tell if this was Ann-Margret engaging in a subtle form of self-parody (like Mae West), or did she really believe in her exaggerated, tigress/vamp act?

This ambiguity is somewhat cruelly exploited in Kitten with a Whip: one of a rash of black & white, low-budget films released in the early 60s that attempted to capture the gritty neo-realism of Something Wild (1961) or UK’s The Leather Boys; but instead fell into the chasm of B-movie exploitation, exemplified by films like Who Killed Teddy Bear?(1965) and Lady in a Cage (1966). Kitten with a Whip was made in 1964, but it feels like a late '50s Mamie Van Doren castoff.
17 year-old Jody Dru, nee Dvorak (Ann-Margret), escapes from a girl’s detention center and seeks refuge in a darkened, apparently vacant, suburban home. Come morning, Jody discovers the residence to belong to aspiring State Senator David Stratton (Forsythe) whose estranged wife and daughter are away. Certain he’s being set up for a political scandal, Stratton decides to call the police but changes his mind after hearing Jody’s tale of abuse and neglect. Resolving instead to help her reverse her fortunes, Stratton offers Jody his assistance only to discover that there is clearly more to this voluptuous teen than meets the eye. What follows is a black comedy of errors crossed with a juvenile delinquent cautionary tale as the woodenly sincere Stratton attempts to extricate himself from the escalating mess his life becomes after crossing paths with the auburn-haired minx.

WHAT I LOVE ABOUT THIS FILM
With its nervously percussive, espresso bongo jazz soundtrack; Saul Bass-inspired titles; and stark, almost nourish, photography; there’s the nagging sense that Kitten with a Whip is trying to say something deep about teen disaffection in the age of The Bomb. Fortunately for us, director /screenwriter Douglas Heyes’ preference for sleaze over sermons makes certain that Stanley Kramer isn't likely to suffer any sleepless nights.

Kitten with a Whip is an overheated, flagrantly gynophobic, suburban nightmare about middle-class normalcy turned upside-down by a bi-polar teenage sociopath in French heels. Ergo, it’s an awful lot of fun.
Everything in this film—emotions, dialog, and dramatic situations—are ratcheted up to such absurdly shrill levels that it feels like you’re watching flash cards. Nothing substantive is allowed to land and take root. Like the animated cartoon that plays in the background of one scene, Kitten with a Whip doesn’t allow for the dust to settle between explosions. As soon as one disaster is felled, a new one pops up to take its place.
All the above would certainly disqualify this film from most people’s must-see lists, but as a fan of the brilliant Faster, Pussycat! Kill! Kill! (1965), I find Kitten with a Whip to be a similar thrill ride. Bad girls are always more fun, and as “Kitten” defies being taken seriously, it’s easy to sit back and wallow in its naïve lewdness. There are countless laughs to be had (some even intentional!).

PERFORMANCES
Kitten with a Whip was Ann-Margret’s first “dramatic” role following her star-making turn in Bye Bye Birdie (her manager even turned down Cat Ballou for this film. He was later fired). Sandwiched between Viva Las Vegas and The Pleasure Seekers, Kitten with a Whip was to be the film to show off her range and versatility. Alas, it did anything but.
There’s a kind of bad acting that is boring to watch and painful to subject yourself to (evident most reliably in testosterone-laden action films), but Ann-Margret’s performance in Kitten with a Whip is so electrifyingly awful, you can’t take your eyes off of her.

If there’s anything jarring about her efforts (she wins us over by being photogenic and histrionically agitated at all times) it’s that Ann-Margret trying to be “real” seems phonier than anything you've ever encountered. It’s like she’s never seen real human behavior and has no idea of how to convey emotions except in the broadest strokes possible. 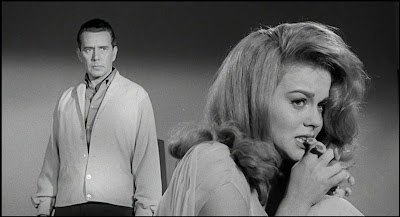 Hers is a strenuous, muscular, performance that decimates everything and everyone else in the film (particularly the stupendously inexpressive and monumentally dull John Forsythe), but it’s the only life the film has. Giving it everything she’s got, Ann-Margret purrs, writhes, gnashes her teeth, pops her eyes, leers, pouts, and glowers;  all in bas-relief, indicating and telegraphing like she’s in a silent movie. She’s magnificent in a "I can't believe my eyes!" kind of way. (Ken Russell would harness Ann-Margret’s ferocity more capably in 1975s Tommy.)

THE STUFF OF FANTASY
As the film’s star, it’s only fitting that Ann-Margret is blessed with the lion’s share of Kitten with a Whip’s colorful (and comical) dialog.

Jody: “Ooooh! Everything’s so creamy! Kill me quick, I never had it so good!”

Jody:  “How come you think you’re such a smoky something when you’re so nothing painted blue?”

Jody: “You’re gonna think I have an awfully dirty mind David, I change it so often.”

Jody: “You follow all this? You live behind walls here, man. Where I come from it’s outer space.”

Jody: “Put it down! You poke that finger at that dial, mister, and that's when I start screaming rape!"

THE STUFF OF DREAMS
Folks who don’t enjoy camp humor or lack a taste for cult films with reputations built on their shortcomings, may find this post bewildering; does he hate Ann-Margret, does he like her? What gives?

As I stated from the start, I’m really pretty much mad about Ann-Margret, but I’m not one of those fans who needs to take an-all-or-nothing stance about a performer. She's developed into a phenomenal actress over the years, but some of her early performances are painful to watch. I'm the first to admit that she's outstanding in both Carnal Knowledge and Tommy...but I'm not about to let my affection for this gorgeous lady excuse embarrassments like Made in Paris or The Swinger (although its title sequence alone is worth the price of a rental). I admire Ann-Margret because she is a dynamo, a hard worker, and is genuinely, truly talented. And like Cher, she’s one of those stars whose career has spanned decades and innumerable shifts in tastes and trends. The two are such survivors they’re likely to be the only things left standing after Armageddon.

One of the things I most like about Ann-Margret is her ability to be “good” even when she’s awful. And by that, I mean I admire her commitment. She may give a bad performance in Kitten With a Whip, but you'd have to look far to find a poor performance done with such conviction. She's giving 100% and then some. The results may be artistically uneven, but when accessed by standards of professionalism, dedication, and sheer hard work, she really delivers. I can’t help but admire that... even as I’m looking at some of her acting choices and wondering “What was she thinking?” 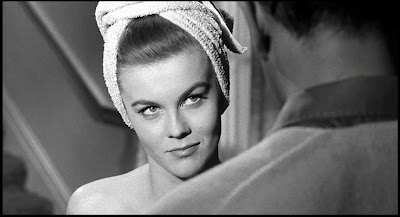 The whiny crybabies of today who drop out of Broadway plays because they’ve eaten bad sushi,  or deliver half-assed hosting performances on Academy Awards telecasts because they disagree with the script…well, they could take a lesson.
Oh, and for the record:  Fans didn’t stay away from Kitten with a Whip because they didn’t like seeing Ann-Margret acting bad; they stayed away because didn’t like seeing Ann-Margret acting badly.