There are many wonderful movie actresses whose work I greatly admire. But before Dunaway, Christie, Streep, Black, Blanchett, and Portman, there was Fonda. Jane Fonda was the preeminent actress of my youth — the gold standard — and for a long while there wasn’t an actress who could touch her. As beautiful as she is versatile, Fonda's transformation from bubble-headed ingénue (Tall Story and Any Wednesday); to libertine sexpot (Barbarella); to compellingly sensitive, serious actress (They Shoot Horses, Don't They?); mirrored the evolving role of women in and charged her screen roles with an immediacy that quickly turned her into a symbol of the times.


Onscreen she was Woman Emergent: the glamorous embodiment of a new feminine standard of intellectual and sexual liberation. Never more so than in the role of Bree Daniels in Klute. Braless, midi-skirted, sporting that iconic shag haircut, dressed in the height of post-hippie funky '70s fashion... Jane Fonda was the sex symbol redefined, and seemed to point toward a new era for women in film in the '70s.
Ostensibly, anyway. I mean, Fonda's Bree Daniels is yet another movie call-girl.
Yes, even as late as 1971,  was still falling back on this overused cliché in its limited stock of women's roles. If a woman wasn't a wife, a girlfriend, a marriage-minded virginity-guarder or repressed businesswoman: prostitute  (or nymphomaniac, interchangeably) is invariably where imagination-starved screenwriters landed when stumped by how to write a female character who is attractive, independent, and has a sex life.


Cinema's fascination with prostitutes and hookers-with-hearts-of-gold unquestionably has a great deal to do with standard male studio boardroom thinking that went: women in a film = sex. Thinking which also supported the double standard reasoning that if a woman in a film has sex outside the sphere of marriage, there's a problem with audience sympathy. Thus, the good-hearted hooker was born. She gave the movie all the sex and nudity it required, but her profession kept her at a cultural remove (she couldn't tarnish the sanctity of home and marriage) but her gold heart made her sympathetic to viewers.
But in Klute, Bree Daniels being a call-girl is more than just steamy window dressing. Her profession is integral to the plot, and, as realized by Fonda, Bree is light years away from the usual idealized fantasy image of prostitution offered in movies.
John Klute (Sutherland) is a small-town detective assigned to investigate the six-month disappearance of local businessman and friend, Tom Gruneman. His search takes him to where it appears Gruneman is in hiding and stalking Bree Daniels (Fonda), a call-girl he allegedly frequented. As Klute's investigation takes him deeper into the seedy underworld of pimps, drugs, and prostitution, his routine Missing Persons case reveals itself to be something unanticipatedly perverse and considerably more dangerous.

WHAT I LOVE ABOUT THIS FILM
The scene which introduces us to the character of Bree Daniels.
As one in an anonymous, objectified line of applicants at a modeling agency, Bree is dwarfed by photo blow-ups of a glamorously dehumanized model while being subjected to a blisteringly painful (to watch) "cattle-call" inspection that makes a meat-rack look humane.

This is the first of several scenes depicting Bree's pursuit of "respectable" employment (she's an aspiring model/actress) as being infinitely more humiliating and degrading than her work as a call girl. Potential employers take physical and emotional liberties (they feel free to touch her or make casually cruel personal comments) while she's forced to mask her humiliation and dejection behind nervous smiles. With this cinematic device, director Alan J. Pakula economically and with great visual panache (thanks to cinematographer Gordon Willis) establishes the essential conflict of Bree's life and sets the stage for why she regularly sees a psychiatrist.

Bree, asked by her therapist why is she still drawn to prostitution after professing a desire to quit:

The extended monologues of Bree's therapy sessions - exposed-nerve, free-association musings on why her life isn't working, wherein she reveals her intelligence and self-awareness - are contrasted with the coolly professional patter she employs with her "johns." Gone is any trace of emotional insecurity as Bree, in a deeply seductive lower-register voice, takes command of the situation while expertly playing the role of the carnal supplicant. Anyone operating so fully in such opposing modalities is clearly someone grappling with a lot of issues, and Jane Fonda brings incredible depth and complexity to the character of Bree, inviting the audience to relate to her as an individual personality, and not merely through the prism of a fixed moral stance taken on prostitution.
PERFORMANCES

Perhaps the biggest testament to how exceptional Jane Fonda is in this, her Academy Award®- winning role, is how the persuasiveness of her performance got audiences and Academy voters alike to overlook their personal responses to Jane Fonda, the political activist, and lose themselves in the character of Bree Daniels. There aren't accolades enough for me to effectively express how much I enjoy and admire Fonda in this movie. It would have been the most pedestrian detective film imaginable without her. Whereas Klute is atmospherically rooted in the early '70s (Bree's outburst, "Goddamn hypocrite squares!" can't help but elicit a giggle), but Fonda's performance is timeless.

My absolute favorite scene in the film is Klute's initial interrogation of Bree in her apartment. Fonda is masterful in navigating the myriad emotional shifts in her character (anger, defensiveness, manipulation, vulnerability) which contrast to dynamic effect with Sutherland's stolid calm. (Love what Fonda does with Bree's reluctant confession that she is afraid of the dark.)


In addition, this scene is a standout example of how to build suspense and generate fear by showing less, not more. Few things are more fright-inducing than those three little words "Don't be afraid," so when Klute says this to Bree and leads her away from a skylight, tension grows unbearable as the camera pulls to a confining, low angle shot that shows us only Bree's hands on Klute's back reflected in a mirror. As he reveals to her that he thinks someone is on the roof watching them, Bree's hands, seconds-ago in a caress (hands dismissed in an earlier scene as being "funny"), clench in tension while she emits a genuine terrified gasp which eerily echoes the sound of the orgasm she'd feigned moments prior with a trick. Just brilliant. Even today, this scene scares the hell out of me.

THE STUFF OF DREAMS
I like it when filmmakers don't play their audiences for dumb. When intelligence is applied and respect given to so-called genre films (movies that fit specific narrative constructs like westerns, horror films, and police thrillers), there's a real opportunity to create something unexpected and entirely innovative.


With Rosemary's Baby Roman Polanski took what could have been a routine horror film and fashioned it into a masterpiece of urban paranoia. With Klute, the late Alan J. Pakula (with the indispensable contribution of Fonda) takes an unremarkable detective story (the MacGuffin of Tom Gruneman's disappearance is dispensed with so quickly that even those who like the film would be forgiven if they fail to remember his fate) and emerges with a deeply insightful character drama that's also a solid and genuinely frightening thriller. On that last score, the contributions of cinematographer Gordon Willis (The Godfather) and music composer Michael Small (The Stepford Wives, Night Moves) can't be oversold.


Klute is one of the best examples of what the New Hollywood of the '70s promised: a merging of art-film sensibilities with popular entertainment. And with Klute Jane Fonda, my favorite actress when I was growing up, joined Shelley Duvall in 3 Women and Faye Dunaway in Bonnie and Clyde, in giving one of the finest performances in an American film in the '70s. 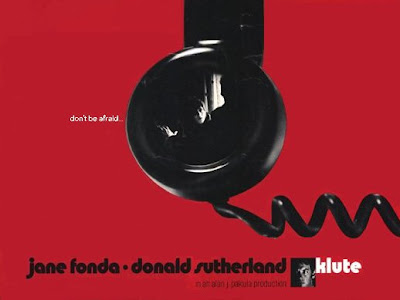 Said by Bree to a trick to relax him,
by Klute to Bree to calm her,
and by the killer to Bree before...