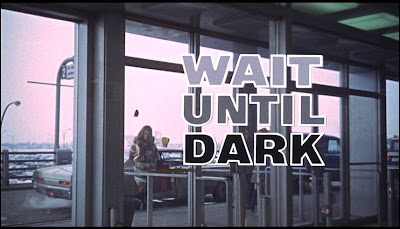 Before there really was such a thing as a high-concept movie, in 1967 Warner Bros. released this doozy of a nail-biter whose intriguingly unorthodox casting and high-concept thriller premise resulted in lines around the block and a boxoffice ranking as 16th highest-grossing film of the year. The film: Wait Until Dark. The casting: All the heavies are played by actors best known for comedy roles. The concept: Somebody wants to kill Holly Golightly!
As if drawn to the theater for the collective purpose of forming a militia in her defense, sixties audiences—long-accustomed to spending a pleasant evening being charmed by the winsome, doe-eyed, Belgian gamine of Sabrina and Breakfast at Tiffany's—turned out in droves to witness Hepburn as a defenseless blind woman tormented by a gang of sleazy, drug-dealing, New York thugs. The Old-Hollywood zeitgeist had shifted in a big way! And if you don’t think placing cinema’s much-beloved eternal ingénue within harm’s way is a concept both incendiary and controversial, you must have missed the 2010 online war raged against Emma Thompson when she dared to utter but a few disparaging remarks about everyone’s favorite sylphlike waif.
Thompson, at the time writing a since-shelved remake of My Fair Lady, drew the heated ire of millions when she expressed the opinion that Hepburn couldn't sing and “Can’t really act.” Ignorant or indifferent to the fact that, at least on this side of the pond, anyone trash-talking Audrey Hepburn is just begging for a major ass-whippin’; Thompson made herself no friends in Hepburn camps. There's no reason to believe there's any connection between this public outcry and the fact that Thompson's My Fair Lady reup hit a snag, but if there’s one thing Audrey Hepburn elicits from movie fans, it’s the near-unanimous desire to shield and protect her. A quality exploited to entertainingly nerve-racking effect in Wait Until Dark.

From the moment I first saw her in Roman Holiday, I've always thought of Audrey Hepburn’s screen persona as akin to that of a butterfly. A creature so exquisitely fragile and beautiful that you couldn't bear seeing harm come to it. Sure, Hepburn was drolly menaced in Charade, and most certainly, pairing the then 27-year-old Hepburn with 57-year-old Fred Astaire in Funny Face constitutes some form of romantic terrorism; but for the most part, Audrey Hepburn has always seemed to me to be a woman far too adorable and classy for anybody to mess with.

That being said, I don’t number myself among her fans who would have been happy to have seen her continue along the path of taking on the same role in film after film. When Hepburn made the heist comedy How to Steal a Million in 1966, she was 36 years old, a wife and mother, yet still playing the sort of girlish role she virtually trademarked in the fifties. While that particular comedy revealed Hepburn in fine form and as radiant as ever, it was nevertheless becoming clear that in a world making way for Barbarella, Bonnie Parker, and Myra Breckinridge; it was high time for the Cinderella pixie image to be laid to rest. 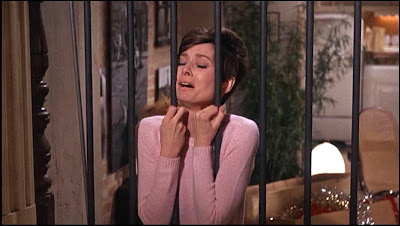 Taking on the role of the tormented blind woman in Wait Until Dark was a concentrated effort on Hepburn's part to broaden her range and break the mold of her ingénue image. Earlier that same year Hepburn appeared to spectacular effect opposite Albert Finney in Stanley Donen’s bittersweet look at a troubled marriage, Two for the Road. Giving perhaps the most nuanced, adult performance of her career, Hepburn in modern mode revealed a surprising depth of emotional maturity that signaled, at least for a time, she might be one of the few Golden Age Hollywood stars able to make the transition to the dressed-down '70s. While Two for the Road ultimately proved too arty and downbeat for popular tastes, Wait Until Dark was a resounding boxoffice success and garnered the Oscar-winning actress her fifth Academy Award nomination.

WHAT I LOVE ABOUT THIS FILM
I really love a good thriller. And good thrillers are awfully hard to come by these days. When a suspense thriller succeeds in its objectives to send a chill up my spine, keep me guessing, or, better yet, induce me to spend a restless evening sleeping with all the lights on…well, I’m pretty much putty in its hands and will willingly follow where I’m led. Wait Until Dark does a marvelous job of duplicating the formula that worked so well for Ira Levin in both Rosemary’s Baby and The Stepford Wives, two of my all-time favorite suspense thrillers. Wait Until Dark takes a vulnerable female character (a woman recently blinded in a car accident, just learning to to adapt to her loss of sight); pits her against an enemy whose degree of malevolence and severity of intent she is slow to recognize (Susy is the unwitting possessor of a heroin-filled doll her tormentors are willing to kill for); and (most importantly) takes the time to develop its characters and methodically build suspense so as best to encourage empathy and audience identification. Simple in structure, yet rare in its ability to sustain tension while providing plenty of nightmare fodder, Wait Until Dark is one of those scary movies that still packs a punch even after repeat viewings.


PERFORMANCES
A while back I wrote about how refreshing it was to see Elizabeth Taylor tackle her first suspense thriller with 1973’s Night Watch. In thinking back to 1967 and my first time seeing Audrey Hepburn’s genre debut in Wait Until Dark, the word that comes to mind is traumatizing. Yes, it was quite the shock seeing MY Audrey Hepburn keeping such uncouth company and being treated so loutishly in a film without benefit of a Cary Grant or Givenchy frock for consolation. Like everybody else, I had fallen in love with Audrey Hepburn’s frail vulnerability in Funny Face and My Fair Lady, so seeing her brutalized for a good 90 minutes was a good deal more than I was ready for at the tender age of ten.

Over the years, my shock over Hepburn’s deviation from type has given way to an appreciation of the skill of her performance here. Actors never seem to be given the proper credit for the realistic conveyance of fear and anxiety, yet I can't think of a single thriller or horror film that has ever worked for me if the lead is unable to convince me that he/she is in genuine fear for their life. Audrey Hepburn delves deep into her character and unearths not only mounting apprehension at her circumstances, but taps into the frustration and helplessness the character feels when confronted with the obstacles her lack of sight place on her means and options of escape and self-defense. Hepburn is the emotional linchpin to the entire movie, and she is incredibly affecting and sympathetic. Without benefit of those expressive eyes of hers (she somehow allows them to go blank, yet finds ways to have all manner of complex emotions play out over her face and through her body language) Hepburn keeps us locked within the reality of the film. Even when the plot takes a few turns into the improbable (once again, my lips are sealed!).

THE STUFF OF FANTASY
Having been born too late to experience the mayhem attendant the release of Alfred Hitchcock's Psycho with that famed shower scene, I'm therefore thrilled to have had the experience of actually seeing Wait Until Dark during its original theatrical run, when exhibitors turned out all of the theater lights during the film's final eight minutes. Jesus H. Christ! Such a thunderous chorus of screams I'd never heard before in my life! My older sister practically kicked the seat in front of her free of its moorings. At least I think so. I was on the ceiling at the time. Without giving anything away, I'll just say that while that experience has since been duplicated at screenings I've attended of the films Jaws, The Omen, Carrie, and Alien; it has never been equaled. At least not in my easily-rattled book.


THE STUFF OF DREAMS
Audrey Hepburn ventured into the damsel-in-distress realm just once more in her career (with this film's director, Terence Young, no less). Unfortunately, it was in the jumbled mess that was Bloodline (1979). An absolutely dreadful and nonsensical film I've seen, oh, about 7 times. As theatrical thrillers go, Wait Until Dark is not up there with Sleuth or Deathtrap in popularity, but it does get revived now and then. Most recently, a poorly-received 1998 Broadway version with Marisa Tomei and Quentin Tarantino, of all people. In 1982 there was a cable-TV adaptation starring Katherine Ross and Stacy Keach that I actually recall watching, but, perhaps tellingly, I can't remember a single thing about.

When people speak of Wait Until Dark, it is invariably the Audrey Hepburn version that's referenced, and it's this film to which all subsequent adaptations, like it or not, must be compared. Even when removed from the fun exploitation gimmick of  the darkened theater and the novelty of seeing Hepburn in an atypical, non-romantic role, Wait Until Dark holds up remarkably well. Delivering healthy doses of edge-of-the-seat suspense and jump-out-of-your-seat surprises, it's a solid, well-crafted  thriller with a talented cast delivering first-rate performances (save for Efrem Zimbalist, Jr., who just does his usual, bland, Efrem Zimbalist, Jr.thing).
Still, it's Audrey Hepburn—age 37, inching her way toward adult roles— who is the real marvel here. Being a movie star of the old order, one whose stock-in-trade has been the projection of her personality upon every role; Hepburn is never fully successful in making us stop thinking at times as if we're watching Tiffany's Holly Golighty, Charade's Regina Lampert, or Roman Holiday's Princess Ann caught up in some Alice-through-the-looking-glass nightmare. But in these days of so-called "movie stars" who scarcely register anything onscreen beyond their own narcissism, I'm afraid I'm going to favor the actress whose sweetly gentle nature has shone through in every role she's ever assumed. That's a real and genuine talent, in and of itself. 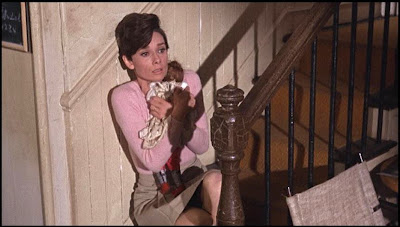