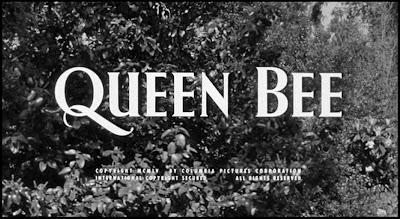 In the overheated melodrama Queen Bee, the Joan Crawford we’re given is one so seemingly tailor-made for the post-Mommie Dearest crowd; I find myself hard-pressed to even imagine how this film was received before Crawford became a camp punchline. What was its intended audience? Certainly, its dominant female lead and soap-opera histrionics qualify it as a late entry in the “woman’s film” genre so popular in the '40s,  but the camp factor is pitched so high in Queen Bee, at times the entire enterprise feels like a well-financed drag act pandering to Crawford’s legion gay fan base. Like All About Eve (1950), Queen Bee seems to be operating on two levels at all times: 1) The straightforward southern-fried potboiler (the least interesting level); 2) The gay-friendly parade of camp-diva posturing, elaborate costuming, and bitchy dialogue.
But whether self-aware or inadvertent, the ever-present gay sensibilities that make Queen Bee such a rip-snorter of an entertainment are thanks solely to Joan Crawford ruling the roost in full female drag queen mode. Always in charge, always fascinating to watch, in Queen Bee Crawford rolls out the entire arsenal of her patented, crowd-pleasing shtick: mannered delivery, mannish countenance, slaps to the faces of co-stars, pointed barbs delivered with haughty disdain, menacing eyebrows, teary-eyed close-ups…the works! And all presented forth as reliably and on cue as though she were taking requests from the audience.
Based on the 1949 novel The Queen Bee by Edna Lee, Queen Bee is a curiosity in that its plot, upon reflection, seems to have no real point to it. It's like a monster movie in which an unprovoked evil—embodied by a beast of single-minded malevolence—is introduced purely for the fun of watching the havoc it can wreak, then quickly dispatched so that normalcy can be regained. Eva Phillips is the monster in question (Joan Crawford, surprise!), a character whose sole defining character trait is Bitch on Wheels, with little to no variance or shading. Eva is a southern socialite who tricked her way into the moneyed Phillips clan (true to Joan Crawford movie tradition, Eva comes from humble beginnings) and is hell-bent on making everyone pay for their part in having made her feel like an outsider.
This manifests itself in her pathologically keeping a mean-spirited, ankle-strapped heel on the necks of anyone foolish enough to stay under her roof. In spite of the fact that her behavior seems to gain her very little, Eva gives herself over to it with a spontaneity and enthusiasm. Something her victims seem to mind a great deal, but not so much that it ever occurs to any of them to leave the comfy confines of the Phillips mansion/plantation.
It's gently alluded to that Eva's contemptibility stems from a frustration born of her embittered, guilt-ridden husband Avery (Sullivan) having emotionally and sexually abandoned their marriage to retreat into the bottle. You see, in order to wed Eva, Avery jilted his-then fiancé, Sue McKinnon (the lovely Fay Wray in a small role); one-time southern belle, now local Ruby Red Dress. it's nice Eva's one-note biliousness has been given a backstory by way of explanation, but considering Eva dumped Avery's best friend, Jud (Ireland), for the bigger fish that was Avery (by way of a faked pregnancy), it's clear she was quite a piece of work to begin with.


WHAT I LOVE ABOUT THIS FILM
People I know who are unfamiliar with Queen Bee are always surprised when I set about summarizing the plot, for it truly boils down to merely 95 minutes of Joan Crawford behaving badly. That's it. For the average moviegoer, that's a mighty slim entertainment prospect. For a guy like me, a man capable of simultaneously appreciating Crawford as both a talented, underrated actress and a laugh-a-minute camp-fest, Queen Bee is the gold-standard. In earlier essays on the films Harriet Craig and Mommie Dearest, I've explained a bit what it is about Joan Crawford that so appeals to me. Suffice it to say that there has never been anyone quite like her before or since, and a true original is hard to resist. I love her when she's really on her game and delivering a solid, serious performance (she's terrific in A Woman's Face), but I'm just as gaga when she succumbs to excess and self-parody, as she does here. She's Joan Crawford, she doesn't have to be anything else!

If it's a Joan Crawford movie, it's a pretty safe bet that the only star one is apt to walk away from the film singing the praises of is Joan Crawford. In Queen Bee, Crawford dominates the movie screen with the same iron will she dominates the lives of the Phillips household. And I couldn't be happier about it. When playing bad, both Barbara Stanwyck and Bette Davis are more adept at delivering performances that are dimensional and based in a recognizable reality. But Crawford's appeal for me is how she so often plays everything (her character's high and lows) in such boldface type. She's unsubtle and frequently full-tilt over the top, but I find her to be SO magnetic a screen personality. I love watching her. I just wish I knew whether my adoration was ironic or not.

Ingenue Lucy Marlow (is that a great name for an actress, or what?), considerably deglamorized from the first time I saw her in A Star is Born (1954), does fine with a purposely colorless role (Eva: "Jen you really must learn to join in conversations. Otherwise you give such a mousy impression!"), and while not being a particular favorite of mine, should be credited with not simply fading into the woodwork. Toothsome Betsy Palmer, whom I barely recognized without a game show panelist podium in front of her, is rather appealing and wins camp points for playing her role as Avery's sister Carol with so much misdirected ponderousness.
Taking the proceedings all-too-seriously, Palmer actually comes close to achieving the impossible ...overacting opposite Crawford! When not trying to wise up the wide-eyed Phillips house newbie to the pernicious ways of the Queen Bee, her character is otherwise a walking bullseye target for Eva's frequent scorn (Eva:"My, Carol, you look sweet! Even in those tacky old riding clothes!").

THE STUFF OF FANTASY
When Christina Crawford gave Crawford fans and detractors the heads-up about Harriet Craig and Queen Bee supplying the closest (not to mention safest) glimpses into what real life was like inside the Crawford household, both films rose to the top of my must-see list. No one will ever know the truth of all that Christina disclosed in her book, but I tell you this, these films make a hell of a double feature. Based exclusively on what Joan Crawford's image has become of late, both films bear that indelible stamp of re-enacted documentary. You can't watch either without your mind going to some bit of nightmarish lore attached to the whole Mommie Dearest legend. Depending on your taste for celebrity self-exposure, this can come off as either highly entertaining or uncomfortably squirm-inducing.

And for those who are most familiar with Joan through Faye Dunaway's portrayal of the actress in the legendary Mommie Dearest, there's still plenty of déjà vu cross-referencing to call your grip on truth and illusion into question.

THE STUFF OF DREAMS
Perhaps it's a sign of age, but the soporific blandness of  so many contemporary "movie stars" is one of the reasons Joan Crawford—considered by many to be more a defined screen personality than an actress—is starting to look better to me with each film. The dull beigeness of actors like Channing Tatum, Jennifer Aniston and Ryan Reynolds, makes me long for Crawford's brand of imposed-personality intensity.

Joan Crawford is first and foremost a star. And a movie like Queen Bee needs a true star at the helm. Obviously relishing every moment, Crawford isn't stretching very far with her performance here, but in tapping into the character's narcissism and malicious manipulativeness with such fiery gusto, one can't help but admire her style and commitment even as you're giggling at her mannered excesses (hell, this is the actress who approached even her role in Trog with straight-faced earnestness). Although I would truly love it were I to detect a note of knowing self parody in Crawford's Eva Phillips, I nevertheless enjoy her performance here very much. It has command, humor, touches of pathos, and there's a scene or two where she borders on the terrifying. I only recently discovered Queen Bee through TCM, but I have since placed it at the top of my list of all-time favorite Joan Crawford films. 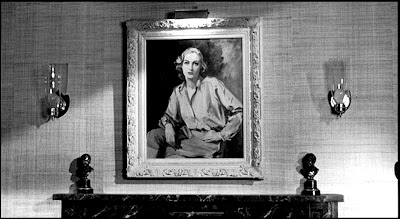 The Queen Bee...who stings all her rivals to death.

Bonus Materials
Hear Barbra Streisand sing the unofficial theme song to "Queen Bee." For Joan Crawford screening parties, may I suggest playing this over the film's closing credits for full camp diva effect. Begin music immediately after Barry Sullivan says the line: "The sun is shining. I didn't expect the sun to be shining." Click Here.

Hey Pepsi fans! Joan Crawford appears in and narrates this 1969 Pepsi-Cola sponsored video. A kinder and gentler Joan (who, oddly enough, comes off as even more terrifying) visits a supermarket...complete with hat, gloves, and a really obnoxious kid! The fact that she doesn't wallop the just-asking-to-be-slapped child is a testament to Mommie Dearest's control. (At least when a camera is around.) Click Here!