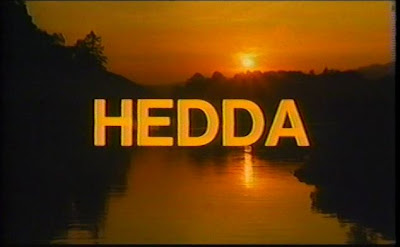 Whether or not Reynolds actually wore Brut I have no way of knowing, but somebody in the 70s must have liked it an awful lot, because for a brief time during that decade the Faberge cosmetics company (the makers of Brut) got into the business of making movies. It makes me smile to think that such a foul-smelling after-shave was responsible for one of my all-time favorite Glenda Jackson films: Hedda. 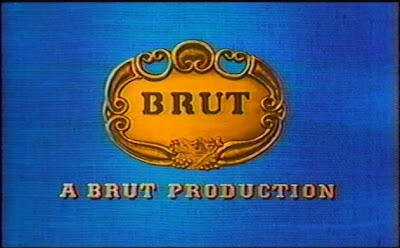 This film adaptation of Henrik Ibsen's 1890 play, Hedda Gabler, is based on the 1975 Royal Shakespeare Company stage production which featured virtually the entire cast of the motion picture under the direction of Trevor Nunn, who also directs the film version.

Being a fellow of a somewhat dreamy nature myself, I find I'm drawn to narratives with protagonists whose lives are motivated (and ultimately undone) by their dreams. Hedda Gabler, like Flaubert's Madame Bovary or Clyde Griffiths in Theodore Dreiser's An American Tragedy, is an individual who believes in romantic ideals (although Hedda, who fancies herself a realist & pragmatist, would balk at the description). What they all share is a whole-hearted belief in and acceptance of unrealistic ideals and lofty aspirations. Romantic myths of happiness and fulfillment which are supposed to be satisfied by marriage, wealth, position or achievement. What makes Hedda Gabler and the others such fascinating individuals is not only that they suffer from a failure to have their lives live up to their dreams, but that their suffering is directly attributable to a grievous flaw in their character. A flaw which provides the defining obstacle preventing them from being successful in converting their idealistic fantasies into a realistic way of living in (and relating to) the world.

The tragedy of Hedda Gabler is that Hedda's "romantic idealism" is not romantic at all, at least not in the traditional sense ascribed to women. Hedda's ideals are almost masculine in nature, in that they are a longing for freedom and control and romantic license; all things Hedda is rather terrified of flouting convention to pursue. As the film opens, Hedda, by all outward appearances, has already attained the romantic ideal appropriate to women of her time: she has beauty, social standing, a loving husband, an opulent home, and possibly a child on the way. The tragedy of Hedda's life is that all of this bores her to madness.

Hedda's fruitless romantic longing is for independence and power (two things accessible only to males in 1890s Norway) and to live in a world in which perfect, heroic acts are rewarded by the wearing of vine leaf crowns. She has a temperament and restless curiosity for the world beyond the limiting confines of her sex and station, but, bristling at the constraints of her preconscribed life, she it simply too cowardly and bourgeois to break from it. In frustrated response, Hedda strikes out through the insidious and poisonous manipulation of the lives of those around her.

WHAT I LOVE ABOUT THIS FILM
Who among us hasn't, at one time or another, felt the frustration of living a life we perceive as growing increasingly short of options as we age? It's easy to feel trapped and imprisoned by the choices one's made if the propensity is to look outside of oneself, failing to recognize that change is possible only through introspection and a level of direct action (courage) necessary to enact change. Hedda dramatizes the fact that it is not usually external limitations that torment us, but rather the bars and prison walls we construct in our minds born of fear and selfishness.
Hedda is forever going on about how bored she is and how limited are her life's prospects; yet, by way of contrast, we observe that her friend & rival, the meek Thea Elvsted is, in turning her back on social convention and abandoning her concern for what others think of her (terrifyingly unimaginable to Hedda), infinitely braver (and freer) than Hedda could ever hope to be.

PERFORMANCES
I have always been crazy about Glenda Jackson. Several years ago I had the opportunity to see Jackson in a Los Angeles theatrical production of Edward Albee's Who's Afraid of Virginia Woolf?. To my great shock and dismay, I thought she was rather awful in it. Admirably, I suppose, she took the character of Martha to a place less traditionally bellicose, and for me, it just seemed flat. Quite a shock given that  onscreen, in my opinion, few actresses are as electrifying. As Hedda Gabler, Jackson commands the screen like a champ and never relinquishes it for a second. Like the stars of yesterday (Davis, Hepburn, Crawford), Jackson makes you watch her and rewards your attention with a layered characterization that makes this oft-performed role seem wholly new and revelatory. Hers is a cunning performance of wit and subtlety that makes the deeply neurotic heroine both frightening and touching (and rather funny).
Jackson, already a two-time Academy Award winner for Best Actress, received her fourth (and final) Oscar nomination for Hedda.  But of course, as Maggie Smith so hilariously pointed out in the 1977 comedy, California Suite, "...she's nominated every goddamned year!" 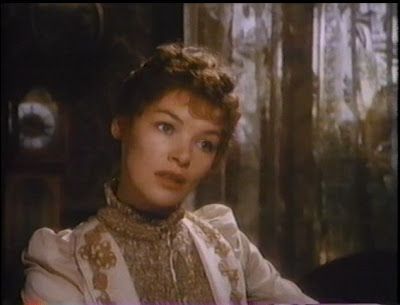 THE STUFF OF FANTASY
I love how the film is shot in sumptuous gold-brown tones which emphasize Hedda's image of herself as a creature trapped in a gilded cage. This theme is further promoted in the elaborate & constrictive women's clothing of the time, and in the overtly ornate trappings of her smotheringly cluttered home. Scene after scene ends with Hedda clenching her fists or fairly trembling with rage as she fails to find any avenue of escape from a world intent on closing in around her.

THE STUFF OF DREAMS
In the 1955 film, The Seven-Year Itch, there's a scene in which Marilyn Monroe, after having seen the movie The Creature from the Black Lagoon, remarks that she felt sorry for the monster because, underneath it all, it just wanted to be loved. Well, I have a similar feeling about Hedda Gabler. There's no denying that in many ways, Gabler is very much a monster. Yet you can't help feeling a little sorry for her when, despite all of her schemes, she's unable to prevent her world from crumbling in around her, and, worst of all, having her worst fear - someone having power over her - realized .

It's difficult not to feel the pain that lies behind Hedda's monstrous behavior because most of us know that there are few things more soul-killing than to harbor a desire for something you're too afraid to pursue. 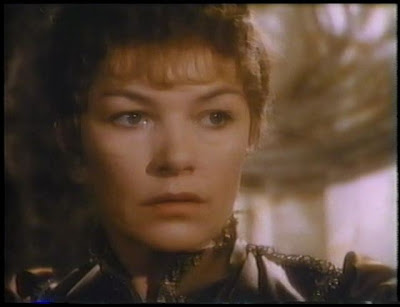 Past adaptations of Ibsen's classic have portrayed Hedda as a victim of her time. This Women's Lib-era adaptation was somewhat controversial in translating some of the dialog in a more comedic vein as well as depicting Hedda as a more active agent of her own destruction. This non-victim point of view has the benefit of bringing to the forefront the irony behind Hedda's endless machinations, as it emphasizes Hedda indeed possessing the power to be the catalyst for many events, most of them proving only to be tragic and at cross purpose with her objectives.