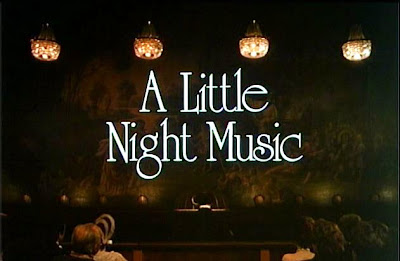 My introduction to Stephen Sondheim’s A Little Night Music came in 1973 when I blindly purchased the Original Broadway Cast LP solely on the strength of my passionate adoration for his timeless scores to the Broadway shows, Company and Follies. I say blindly because, despite my mini-fandom of Sondheim (that same year I’d dragged my family to see The Last of Sheila simply because I’d heard Sondheim collaborated on the script with actor Tony Perkins), I really knew nothing about A Little Night Music at all. I was then-unaware of the 1955 Ingmar Bergman film upon which it is based —Smiles of a Summer Night; I didn't know anything about its content or structure, or whether it was a dramatic musical or comedy; and of course, I hadn't heard a note of the music (I know it’s hard to imagine now, but there was actually a time when not every man, woman and child had a recording of Send in the Clowns in release).

But here is an instance of ignorance most assuredly proving to be bliss, for in purchasing the cast album without benefit of foreknowledge, I was granted the ultimate gift of being introduced to A Little Night Music as a purely musical experience. And for a Sondheim fan, what could be better? As a show, A Little Night Music is a perfectly charming little sex farce, perhaps one of the best of its stripe; but for me, its strongest suit has always been Sondheim’s lushly romantic score. Consisting entirely of intricate waltz-time melodies with witty lyrics full of astoundingly clever wordplay, Sondheim’s compositions for A Little Night Music are among the best of his illustrious career.

By the time the film adaptation of A Little Night Music opened for a limited engagement at San Francisco’s Castro Theater in 1977, I had not as yet seen a stage production (that wouldn't be until some 30 years later) but having all but worn out the grooves on my Broadway cast LP and committed the entire score to memory, I would say that I was more than primed for the event.
Like an intricate waltz in which the participants continually and imperceptibly change partners, A Little Night Music is a lyric dance of desire in which lovers, paired by fate, and with varying degrees of success, try to manipulate the circumstances of their lives.

In turn-of-the-century Austria, stage actress Desiree Armfeldt (Taylor), wearying of her life on the road away from daughter Fredericka (the superb Chloe Franks), hatches a plot to marry former lover Frederick Egerman (Cariou). Obstacles: Frederick has recently wed the beautiful but rather shallow Anne (Lesley-Anne Down), his 18-year-old love who, after 11 months of marriage, still guards her virginity; Desiree herself is the mistress of the jealously possessive and much-married military dragoon Carl-Magnus (Guittard), whose shrewd and embittered wife (Diana Rigg) is Anne’s old school chum; and, adding to the mix, Erich Egerman, Frederick's son from a previous marriage (Christopher Guard) is tortuously in love with Anne, his stepmother.

An orchestrated string of comic contrivances results in this amorously antsy group (which also includes a randy housemaid and a handsome manservant [Lesley Dunlop & Heinz Marecek]) converging for a weekend at the country estate of retired courtesan Mme. Armfeldt (Gingold) who just also happens to be Desiree’s mother.
A Little Night Music is the stuff of classic romantic farce played out with considerable charm and wit by an engaging cast in eye-poppingly sumptuous costumes and surroundings. And interwoven amongst the sometimes heartbreaking follies of these lost and searching fools upon whom the summer night is hoped to smile, is Stephen Sondheim’s breathtaking music (lushly orchestrated to Oscar-winning effect by Jonathan Tunick who appears briefly as the conductor for the operetta that opens the film).

Translating a beloved stage musical to the screen is largely a thankless job, for one would have to attend a comic book convention to find fans more vociferously persnickety and proprietary than theater geeks.
And while I've suffered my share of gut-wrenching disappointments at seeing some beloved stage show bowdlerized on the screen (cue Sir Richard Attenborough’s lame-legged A Chorus Line), I always concede to the fact that film and stage are entirely different mediums and a movie musical has to stand on its own distinct merits, not on how faithfully it translates its source material.
I’m in a small camp on this one, I know, but I find A Little Night Music to be a marvelous movie musical. One that I'm well aware fans of the stage show consider to be something of a disaster. I'm not denying its flaws (even the filmmakers admit that pressures of time and budget made certain compromises necessary), but for pure screen pleasure and taking delight in wonderful actors, beautiful music, and a sharp, funny screenplay, A Little Night Music is a most diverting and glorious entertainment.


My lack of a theatrical frame of reference no doubt played a large part in why I fell so hard for this imperfect, yet thoroughly delightful film, just as did the circumstances of my seeing it (The Castro Theater was packed, the film was shown with an intermission, and applause followed almost every number). Hoping just for a chance to see what I had missed in never seeing the show onstage, A Little Night Music as a film actually exceeded my expectations in terms of cinematic style, performances, and overall panache.
It succeeded in being bitchily witty, unexpectedly moving, charmingly romantic, and at times, just gorgeously opulent and lovely. This kind of light, frothy entertainment is exceedingly difficult to carry off, but for me, A Little Night Music hit just the perfect key. An odd and perhaps unfortunate choice of words, I know, given Elizabeth Taylor’s touchingly hesitant vocalizing of Send in the Clowns (one critic’s diplomatic summation of Taylor’s rendition: “No chart-buster”). 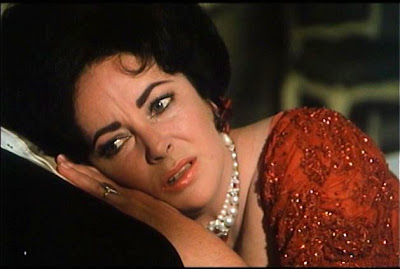 Well-suited to portraying a diva of advanced years who knows a thing or two about how to get a married man to leave his wife, Elizabeth Taylor is at her latter-career best in A Little Night Music. Not only is her much-commented upon, well-upholstered figure perfectly suited to Florence Klotz’s Oscar-nominated period costumes (although in some scenes one might wish cinematographer Arthur Ibbetson had made more of an effort to photograph her flatteringly), but is quite winning as she effortlessly glides from slightly overplayed comedy to genuinely touching drama. She’s marvelous and brings an appropriately regal star power to the film. I think she makes a fine Desiree, but in spite of her small triumphs in the role, it’s Diana Rigg who walks away with the picture.
To paraphrase a lyric from one of the show's Second Act songs, “The woman is perfection.”  Diana Rigg, whose talent for high-style bitchery is rivaled only perhaps by Maggie Smith, is everything a film like A Little Night Music needs. She's an urbane and spirited actress with a way of commanding the screen no matter whom she shares it with. Hers is a sharp, scene-stealing performance that gives the sometimes lagging film much-needed zest and fire.
Adding to this is the brilliant Hermione Gingold who, though sadly underutilized (and denied her lovely song, Liasons), enlivens each of her scenes with her trademark droll delivery. When one is not feeling frustrated by how poorly these ladies' talents are sometimes showcased, the joint contributions of these two actresses is invaluable in making A Little Night Music such an enjoyable experience.

THE STUFF OF FANTASY
I’m not overly fond of the arbitrary, often unimaginative “opening up” that occurs when theatrical properties are adapted to the screen, but I love it when directors discover an authentic cinematic concept for a show, justifying its transfer to another medium. The song The Glamorous Life Desiree Armfeltd's ode to the theatrical life on the road, is rewritten as the daughter's self-rationalizing boast/lament at having a mother who is wonderful to brag about, but seldom around.  The ingeniously economic number fashioned for the new song relays a great deal of backstory, plot exposition, and character information in a montage of images, both silent and sound, in a manner calling to mind the sensation of leafing through a scrapbook.

THE STUFF OF DREAMS
Even those not particularly fond of the film express nothing but praise for the handling of the A Weekend in the Country number; the pre-intermission showstopper and the film's centerpiece. Shot in a series of escalating cross cuts that mirror the mounting anxieties of the two parties set to merge at the Armfeldt estate, its a bouncy and amusing number well-played by all and cleverly cinematic. It's a real highlight. Fans of Downton Abbey should really discover A Little Night Music...it has a wonderful look about it in its costumes and locations. 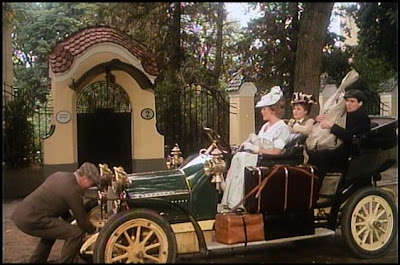 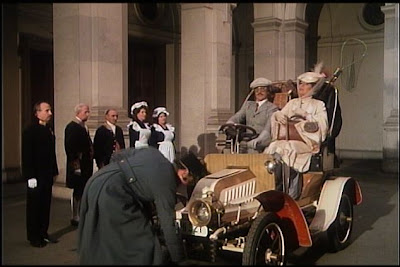 Considering how many people involved in the original Broadway production were involved in bringing A Little Night Music to the screen (Sondheim, director Harold Prince, choreographer Patricia Birch, screenwriter Hugh Wheeler, costume designer Florence Klotz) it's surprising the finished product pleased so few. The filmmakers cited crunched schedules, unstable financing, and the legendarily bad health of Taylor as the reasons for the many compromises undertaken.
True or not, I think all that focusing on what could have been clouds a fair appreciation for what was accomplished, which for me, a man who returned to the Castro Theater three more times to see A Little Night Music during its initial engagement, is something pretty special.

(Incidentally, these days, what with all those kids from Glee butchering one Broadway standard after another, I'm beginning to look more kindly on ol' Liz's  "no chart-buster" version of Send in the Clowns.) 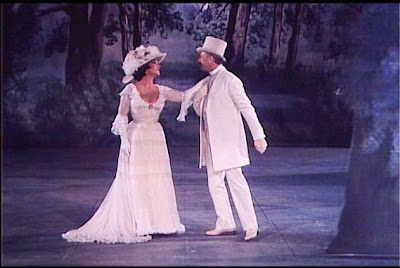