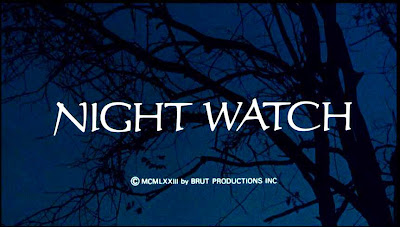 Late in the summer of 1973, just around the time I and most of America were in the throes of a pop-cultural mania sparked by the powerhouse release of The Exorcist, the delectably tense drawing-room thriller Night Watch, was sneaked into Bay Area theaters without benefit of fanfare or much in the way of advance publicity.


This was at the height of Elizabeth Taylor’s and Richard Burton’s waning relevance as both movie stars and tabloid darlings, theirs having been a ten-year reign of bad publicity, bad behavior, and bad films together —the sublime Who’s Afraid of Virginia Woolf? notwithstanding—culminating in a final tandem screen appearance in the 1973 two-part TV-movie “Special Event” prophetically titled: Divorce His – Divorce Hers (their 10-year marriage would end the following year). Like most everyone else at the time, I had grown pretty tired of hearing about the ubiquitous “Liz & Dick”—Hollywood’s answer to Orthrus, the mythological two-headed beast—whose conspicuous private life excesses had long overshadowed any merit I once accorded their professional talents. Off my personal radar for some time, I hadn't seen Elizabeth Taylor in a movie since 1968’s Secret Ceremony (which I loved), but when I saw the newspaper ad for Night Watch, I knew I HAD to see this movie.

Based on playwright Lucille Fletcher’s (Sorry, Wrong Number) moderately successful 1972 Broadway play starring Joan Hackett and future Taylor co-star Len Cariou ( A Little Night Music - 1977), Night Watch, on the surface, treads territory familiar to those acquainted with George Cukor’s Gaslight (1944) or any of those “Is she crazy or is she being driven crazy?” thrillers like Midnight Lace (1960), Diabolique (1955), and Sudden Fear (1952).

Idle and wealthy Ellen Wheeler (Taylor), the neglected wife of loving but desperate-to-prove-he’s-not-living-off-her, workaholic husband, John (Harvey), is still, after eight years, haunted by memories of her first husband’s death: a violent automobile crash that also took the life of his 20-year-old mistress. After suffering a crippling breakdown, Ellen has since been plagued by nightly bouts of insomnia, and subtly treated as a mentally fragile time-bomb by both her husband and her visiting girlhood friend, Sarah (Whitelaw).
On one particularly stormy night vigil, with too little sleep and too many inner demons to battle (and there are a LOT of rainstorms in this London-based thriller), Ellen glances out the window to the abandoned house across the courtyard and sees, in a flash of lightning and flurry of storm-tossed shutters, the horrifying image of a man with a slashed throat propped grotesquely in a wing-back chair situated close to the window. When a police search of the old dark house fails to unearth even a trace of habitation, let alone evidence of foul play, John and Sarah’s concern for Ellen’s mental state intensifies. Meanwhile, Ellen herself grows increasingly convinced that what she saw was real. 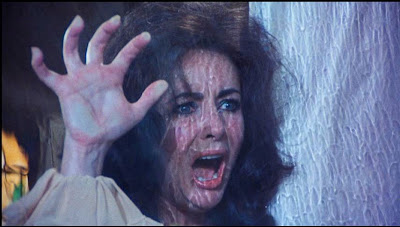 I don’t tend to think of myself as someone drawn to a particular type of film, but truth be told, I confess to having a decided weakness for suspense thrillers. Unfortunately, the flip side of being a film fan any length of time is a growing over-familiarity with certain narrative tropes and plot devices. A too-steady diet of suspense thrillers can wreak havoc with the ability to find a film you can't second guess or stay one step ahead of. As movie genres go, the suspense thriller (and its attendant sub-categories: the psychological thriller, the mystery, the whodunit, the erotic thriller, the sci-fi chiller) is one of the last strongholds of cinema amazement. Thus I really relish it when, as is the case of Night Watch, a movie so narratively conventional on the surface can still have so many sinister surprises up its sleeve.

As a lifelong insomniac familiar with the kind of subtle disquiet that can creep into the soul in the wee small hours of the morning, I have to say first and foremost I love the film’s title. To “Night Watch” is a perfect description of what it feels like to be wide awake when the vast majority of those around you are asleep. It feels like you’re standing metaphysical guard against your id playing havoc with all those subterranean thoughts and repressed terrors your ego holds so reliably in check during the daylight hours. Secondly, I found myself totally caught up in the way Night Watch uses the conventions of the Modern Gothic to construct a persuasively suspense-filled thriller built around the uncertainty of perception. This film is full of games of truth and illusion more deceptive (and far deadlier) than any of those employed by Albee’s George and Martha.

With but a few exceptions, most of my favorite actresses have tried their hand at the suspense thriller. Meryl Streep – Still of the Night; Audrey Hepburn – Wait Until Dark; Sandy Dennis – That Cold Day in the Park; Julie Christie – Don't Look Now; Jane Fonda – Klute; Lauren Bacall – The Fan; Susannah York – Images; Faye Dunaway - Eyes of Laura Mars; …even such unlikely candidates as Goldie Hawn (Deceived) and Twiggy (W). In this, her sole foray into the world of scream queens, daggers, and red herrings, Elizabeth Taylor is to the manner born.
Movies like this tend to fall apart if the audience is unable to identify with or relate to a character's dilemma. Elizabeth Taylor, an actress of fragile appearance masking a steely core,  brings a considerable amount of verisimilitude to her character, making Ellen's deteriorating mental state both believable and compelling. She is given solid support by the talented, exclusively British, cast, but Taylor holds the whole thing together by making her terror seem debilitatingly real. Perhaps this is due to Taylor, an actress who has played characters created by Tennessee Williams, Edward Albee, and Carson McCullers; not being an individual we consider to be a stranger to hysterics.

Reunited with her Butterfield 8 co-star, Laurence Harvey (only 45-years-old at the time, but exhibiting the wasting effects of the stomach cancer that would take his life only four months after the film’s release), Taylor is simply terrific as the high-strung witness to a possible murder no one believes really happened. Like late-career Bette Davis and Joan Crawford, late-career Elizabeth Taylor is often a matter of taste. Those having a problem with her impossible-to-ignore star persona, fluctuating weight gain (sometimes mid-film), designer caftans, and unique vocal style (she’ll insert pauses and stress emphasis in the most unexpected places) are not likely to be persuaded by her work here. Me, I think she’s the tops, and in Night Watch she gives a spellbindingly intense performance that's revealed to be even sharper and subtler upon repeat viewings.

At first glance, Night Watch looks like a derivative catalog of hoary horror film clichés. And, well…it is. There’s the woman in distress; the incessant thunderstorms with well-timed lightning flashes; the old dark house; the ludicrously skeptical friends and annoyingly unhelpful police; the red herring assortment of suspicious characters with dubious motives; the non-stop entreaties to “calm down” or “get some sleep” - they’re all there.
It’s only later, when you start to realize how much your expectations have been intentionally manipulated, does it begin to sink in how cleverly Night Watch works audience familiarity with the conventions of the genre to it its advantage. It's a tight, well-paced thriller that deftly builds its suspense by playing with the audience's mind as cleverly as it plays with that of Taylor's character.


THE STUFF OF DREAMS
I was 15-years-old when I saw Night Watch, and even after the nerve-wracking horror of The Exorcist, the PG-rated Night Watch scared the hell out of me. Seeing it now some 30 years later, not only does it really hold up as a crackerjack thriller that plays fair with its surprises and twists (it’s one of those rare thrillers – like Hitchcock’s – that keeps paying dividends the more you see it), but there’s the added bonus of the whole '70s feel of  it.

For those uninterested in taking either Elizabeth Taylor or the film seriously, Night Watch has much to recommend it in camp appeal for the terrifically glossy '70s look of the whole thing. There's Taylor at her 1973 diva best, photographed flatteringly and sporting a host of conceal/reveal '70s finery. There is much to take in visually, from big hairstyles, glam makeup, bulky jewelry, turtlenecks, positively enormous sideburns, wide ties, and even an ascot.
Though rarely referenced and seen by very few, Night Watch is one of my favorite thrillers. I'd recommend it to anyone with a fondness for the magnificent Elizabeth Taylor, or for anyone interested in atypical curios from this favored actress's career.

Happily, the Warners Archive Collection DVD has been beautifully remastered and is a huge improvement over the exceedingly dark, pan and scan VHS release from several years back. Scenes once taking place in near-total darkness (those who've seen the film know what I mean) are startlingly clear. Also, and I might be misremembering here, but I thought there was once a terrible George Barrie / Sammy Cahn theme song played over the end credits that has since been removed (hooray!). I see the song exists in the IMDB credits (title: "The Night Has Many Eyes") and I seem to recall it being sung by a Tom Jones sound-alike. In any event, my recollection of it was that it was 100% not the kind of MOR Sinatra-esque ditty you wanted to be played after the jolting finale of this thriller. It reminds me of Henry Mancini's equally mood-killing and inappropriate "love theme" from Wait Until Dark.
Note: I usually try to mix up the kind of films I write about each month, but in looking over my posts for December, I'm pretty sure the preponderance of thriller/suspense films represented this month (Carrie, Eye of the Cat, Night Watch) is in direct response to all that sugary, family-oriented programming one is subjected to on television during the holiday season. However, the highlighting of two Elizabeth Taylor films (A Little Night Music and Night Watch) is without a doubt an attempt on my part to divest myself of the memory of that Lindsay Lohan  "Liz & Dick" TV movie which aired on Lifetime last month. Boy, talk about your horror films!
Copyright © Ken Anderson  2009 - 2012
Posted by Ken Anderson at 4:49 PM