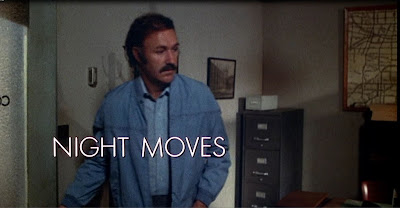 For some of us film fans, certain directors come with their own baggage. If I see a David Lean film, I expect sweeping spectacle; If I see Bogdanovich, I expect film school redux. Kubrick is great for icy misanthropy, and Woody Allen is ideal for...well, Woody Allen.

Arthur Penn (Bonnie & Clyde) is a director whose name I so associate with serious themes and deep social commentary that even when he directs a simple little detective drama like Night Moves, it's difficult not to attach to it a profound, pithy significance that may not even be there. In the case of Night Moves, an updated noir bathed in the same chic nihilism as Francis Ford Coppola's The Conversation (1974), the "significance" is there in abundance.
In the summer of 1975 I had just gradated high school and my summer job was ushering at a movie theater in San Francisco while waiting to start film school in the fall. I was thrilled Night Moves opened in the theater where I was employed, allowing me the the opportunity to see it countless times (for free!). And it's a good thing, too. for the plot of Night Moves is a real puzzler that benefits from repeat viewings. It was simply icing on the cake that Penn's solemn approach to the detective film genre so suited my post-adolescent self-seriousness.
The plot of Night Moves is ostensibly an update of the typical '40s film noir detective thriller, only with a post-Watergate deconstruction of the American hero myth thrown in. The detective in question, Harry Moseby (Gene Hackman, who, like Karen Black, seemed to be in every film made in the '70s), is adrift, both personally and professionally, when hired by a fading movie actress to locate her runaway teen daughter. Seventeen-year-old Melanie Griffith, making her film debut, is cast as the sexually precocious daughter. A nymphet role of the sort she would play again in Paul Newman's The Drowning Pool (1975) and likely incite picket lines today. Griffith makes quite an impression, and I distinctly remember wondering if this girl's helium voice would change when she grew up. (It didn't.) 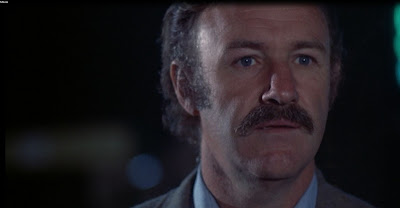 Client: "Are you the kind of detective who once you get on a case nothing can get you off it? Bribes, beatings, the allure of a woman's body?"

As was the wont of '70s films, as Moseby delves deeper into the mystery of his case, which takes him to the Florida keys and has him stumbling upon a smuggling operation, he inevitably has to confront the even deeper mystery that is his life. 70s films were nothing if not about reducing all human experience to navel gazing.


WHAT I LOVE ABOUT THIS FILM
Uncompromised heroes can be boring onscreen. Saints and do-gooders always pale next to the more dimensional and colorfully-drawn villains. One of the great things Penn does with Hackman's character is that he makes him so flawed in his reason; so limited in his awareness of self; basically, so human in his attempt to defend and uphold his moldy moral code, you can't help but find yourself drawn into his quest. Especially as the mystery he's investigating begins to spiral far beyond anything he initially thought it would be. Hackman's Harry Moesby joins the ranks of many '70s screen heroes: Jack Nicholson in Chinatown (1974) Warren Beatty in McCabe & Mrs. Miller (1971) and Hackman's Harry Caul in The Conversation. Heroes whose best efforts fail to pan out. Heroes who are no match for the larger systems of corruption they're fighting against. In a world where the bad guys and the good guys are no longer distinguishable by black or white hats, heroism itself can seem like an obsolete virtue.
PERFORMANCES
I like Gene Hackman immensely (The Poseidon Adventure not withstanding), but at this stage in his career he seemed to be giving the same performance in film after film. It took Superman (1978) to shake some of the cobwebs off of his acting style. Mercifully, he's always an interesting actor to watch; intelligent and sensitive, yet always a kind of violent tension lurking beneath the surface. But the performance that really caught my eye and captured my attention was Jennifer Warren's. 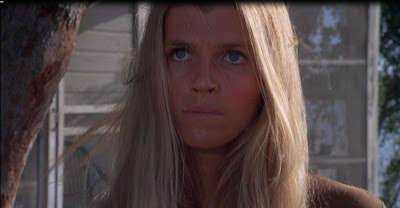 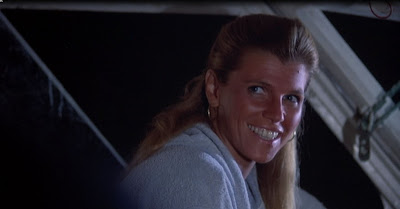 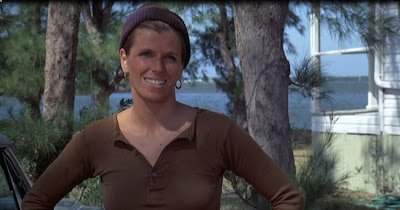 As the enigmatic Paula, Warren is a modern update of the traditional noir femme fatale. Like those ladies, she's beautiful, earthily sexy, strong-willed and prone to speak in riddles. I was most impressed by her natural acting style and striking presence. To me, Warren's husky voiced, no-nonsense sexuality hinted at what feminism might have inspired in the contemporary screen sex symbol.

THE STUFF OF FANTASY
Paraphrasing like crazy here, but Raymond Chandler once wrote of detective thrillers that it didn't matter much in the end "whodunit"; what mattered was the successful exploration of human nature and the examination of the darkness at the center of man's soul. In that vein Arthur Penn's Night Moves succeeds mightily and proves very effective as a dramatization of a man's inner journey. The big mystery and plot twists at the center of Night Moves are pretty satisfying (and the film has a terrific ending), but I doubt if you can find two people who can agree on just what the hell is going on. But chiefly because of the quirky cast of characters assembled and the uniformly fine performances throughout, Night Moves is a puzzle of a film that works whether you fit all the pieces together or not.

Nobody did heady pretension like '70s directors. Night Moves is a perfectly enjoyable detective thriller when viewed on a strictly surface level, but I love that Penn chose this particular genre to make a heavy statement about the human inability to connect, abandonment, loneliness, betrayal, and the ambiguity of morality. 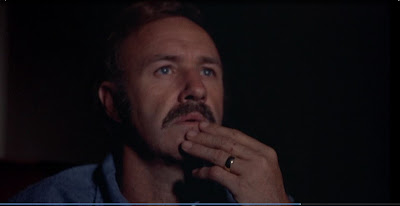 It's stylish, well-cast, and there's plenty to discover in the plot and in the performances with each viewing. After Bonnie & Clyde, Night Moves remains my favorite Arthur Penn film.