Whether for the prestige, visual opulence, short-hand history, or easy-access sentimentality, period films and costume dramas have always been a Hollywood staple and a vital part of movie storytelling. But in the 1970s, the need for some kind of collective breather from the relentless tensions of the “Now” (i.e., Vietnam War, Watergate, impeachment, oil crisis, inflation) produced a market-surge interest in movies set in the “Then.” Particularly the then of the 1920s and 1930s.
Some of these films were escapist homages to retro genres (At Long Last Love -1975). Some were style-fetish showcases devoted to the detailed reconstruction of the fashions, furnishings, and décor of the era (The Great Gatsby -1974). And some were trenchant exercises in ‘70s disillusionment whose nihilist themes were tempered by the distancing device of taking place in America's recent past (The Day of the Locust -1975). Roman Polanski’s Chinatown managed to be all three.

The collaborative effort of the members of the “New Hollywood” Boys Club: producer Robert Evans (The Godfather, Marathon Man), screenwriter Robert Towne (Shampoo, The Last Detail), and director Roman Polanski (Rosemary’s Baby, Macbeth), Chinatown had a bumpy, three-year journey to the screen (covered in deliciously intricate detail in Sam Wesson’s book The Big Goodbye: Chinatown and the Last years of Hollywood). But when Chinatown premiered in theaters in the summer of 1974, the many arguments, rewrites, firings, walkouts, and endless weeks of tinkering proved not only to be more than worth the effort, but stood as evidence of the degree of care and artistry that went into fashioning a film that many today regard as a modern masterpiece of American cinema.
Hardly considered the sure-fire success its current reputation would suggest, Chinatown struggled through disastrous previews and a difficulty generating pre-release interest in a 1974 movie marketplace dominated by the twin publicity blitzkriegs of Lucille Ball's ill-conceived Mame and Robert Redford's The Great Gatsby. Three-time Oscar nominee Jack Nicholson (his most recent being a Best Actor nod for 1973's The Last Detail) was hot at the time, but there existed considerable doubt among many as to how he would come across in this, his first stab at a leading man glamour role.
Meanwhile, Faye Dunaway's post-Bonnie and Clyde screen output had proved erratic at best, with her The Thomas Crown Affair (1968) golden girl patina coming perilously close to tarnishing after a string of arty flops and effective but unfruitful supporting roles. Then there was Roman Polanski...with his days as New Hollywood's European wunderkind a matter of history and coming fresh off two back-to-back boxoffice bombs (Macbeth -1971 and What? -1972), his name carried about it an aura of fall-from-grace tragedy (the Manson murders) in a town ruled by superstition.
Further contributing to the uncertainty surrounding the film's reception was the fact that a quick recounting of Chinatown's plot-- "A private eye in 1937 Los Angeles investigates a mystery involving a real estate swindle and the city's water rights!" --didn't exactly set the pulse racing.
But what Chinatown had going for it was that it was an original. Not an adaptation of a previously-produced novel, film, or theatrical production. As '70s movies became more formulaically bloated (The Way We Were -1973) and market-driven slick (The Sting - 1973), Chinatown's creative integrity vs its dubious box-office prospects felt like a throwback to Hollywood's very recent past. Back to the start of the decade when difficult-to-categorize films like Diary of a Mad Housewife (1970) and Five Easy Pieces (1970) were being made because they were stories the filmmakers wanted to tell, not because they were sure-fire blockbuster material.

Thankfully, films are frozen in time. People, alas, are not. In 1974, audiences drew subconscious parallels between the dogged tragedies of Roman Polanski's personal life and the cursed fate of J.J. Gittes. Today, I'm afraid the parallels linking Polanski and Noah Cross fairly hit one over the head. 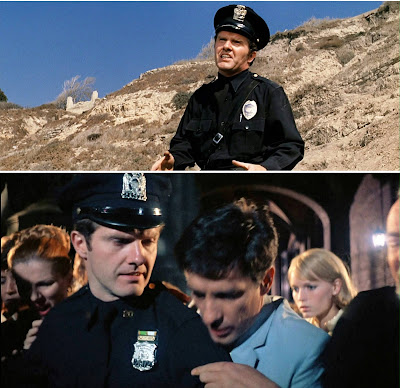 Actor Paul Jenkins, who plays Policeman #1 in Chinatown (1974), made his film debut as a policeman in Polanski's Rosemary's Baby (1968).
Chinatown was planned as the first film in a trilogy. A plan which ground to a halt after the weak boxoffice performance of the second entry, The Two Jakes (1990). Set in 1948, the Jack Nicholson-directed sequel sorely misses Polanski's gift for cinematic storytelling and gets my vote for film most likely to convince you that Chinatown didn't need a sequel in the first place. Still, I did get a kick out of seeing these actors from the original return. 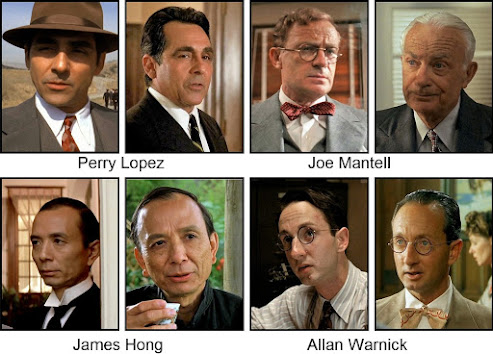 Chinatown was a summer release, opening on Wednesday, June 26, 1974, at San Francisco's Coronet Theater (which had just hosted The Great Gatsby for 11 weeks). I fell in love with the movie poster the instant I saw it, purchasing it a full month before seeing the film. The artwork captures just the right tone of nostalgia, the shadowy figure of the hatted and pinstriped Nicholson leaving no doubt as to the film's noirish roots, the dreamy image of Dunaway's face framed by the trails of cigarette smoke. the essence of romantic longing.
The water motif is worked in with the wave crashing against Nicholson's sleeve, it being one of several elements of the poster that refuse to stay within the boundaries of the frame. From the lettering to the heat-glare effect of the coloring, everything about this poster is just perfect.
Copyright © Ken Anderson  2009 - 2021
Posted by Ken Anderson at 11:01 PM