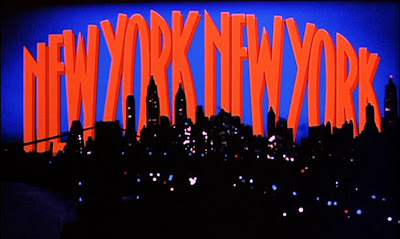 It's an odd thing being a film enthusiast. One part of you regards film as an art form, worthy of all the aesthetic principles applied to fine art; the other makes peace with the fact that film is an entertainment industry "product" and just as likely the inspiration of tax shelters, hedge funds, and profit predictions. (I'm not naive to the realities of the movie industry, but I confess that I still find it a sobering experience watching the Academy Awards each year and hearing, instead of lofty speeches about their dedication to the higher principles of art, the gratified listing of professional associates like producers, agents, managers, and publicists.)
It's for these reasons why, in this world full of directors more concerned with building an add-on to their Malibu beach homes than with building a legacy of work that has something to say about the human condition, I remain (sometimes blindly) faithful to and thankful for filmmakers like Martin Scorsese. Even when he falters, as I believe he does with , he's still one of those directors who always appears to be trying to make films that matter.
I first saw  in in 1977. Due to the success of Taxi Driver, Robert De Niro and Martin Scorsese were extremely hot at the time, and San Francisco was all abuzz over the fact that, simultaneous to the release of New York, New York, Liza Minnelli was appearing at the Orpheum Theater in a pre-Broadway tryout of the Scorsese-directed musical, Shine It On (which became The Act by the time it reached Broadway). Minnelli had suffered a string of movie flops following 1972’s Cabaret, but the papers were full of gossip about her romance with Scorsese and predictions that  would return her to her former station as the queen of show biz.

Alas, despite high-running anticipations,  flopped rather spectacularly when it opened. The original version I saw on opening day was hastily re-edited within the week and a shorter version re-released to theaters, but to no great effect. The verdict was already in and the film pretty much declared D.O.A. by the critics.
The most extravagant film to date for the gritty Scorsese (the combined budgets of all his previous films didn't equal the $14-million spent here),  is a 1940s MGM backstage musical viewed through the dark prism of the '70s zeitgeist (individualism, commoditization of art, and feminism crop up amongst the nostalgia fetishism). Sweet-natured big band singer Francine Evans (Minnelli) falls for volatile saxophone player Jimmy Doyle (De Niro), and in the tradition of A Star is Born and Cover Girl, Francine’s professional ascendancy threatens De Niro’s ego and puts a strain on their romance.
No expense is spared in giving the film the look and feel of those quaintly studio-bound romances of old, but Scorsese’s desire to contrast '70s naturalism with the stylized artificiality of '40s musicals doesn’t really gel, and the whole enterprise feels like an obscenely over-funded film school experiment.
Without a doubt, Scorsese’s biggest and most fatal miscalculation is in mounting such a staggeringly sumptuous production and then neglecting to give us either characters to care about or a romance to root for (or, to be honest, much in the way of a story at all). What were the writers thinking in dreaming up De Niro’s Jimmy Doyle? Did Scorsese really think a guy this noxious (he's like a cross between Travis Bickle and Jake LaMotta) would make for an appropriate musical-comedy leading man? Even with the film structured as something of a dramedy, De Niro's lack of any kind of redeeming qualities leaves an emotional hole dead-center of this overstuffed opus. In addition, not only is De Niro’s character such a selfish, hot-headed, obnoxious bully that watching his scenes becomes an increasingly trying experience, but the level of passivity with which his abuse is met by Minnelli's character has the effect of souring our feelings toward her as well.
When veteran filmmakers lament the loss of the artistic freedoms that came with the "New Hollywood" of the '70s, one can't help but feel that a lot of the blame must fall at their own cocaine-dusted feet. Seventies darlings like Peter Bogdanovich and Michael Cimino provided the nails for their own coffins by misusing their success to cultivate costly, undisciplined vanity projects (At Long Last Love & Heaven's Gate, respectively), and Scorsese follows suit with New York, New York.

These directors, who were so resourceful with tiny budgets, all seemed to lose their minds when handed millions, prompting the studios and lawyers to ultimately step in, like stern governesses, and take back the keys to the candy store. Scorsese allows improvised scenes to drag on and on pointlessly, as if unable to ascertain when to cut; characters pop in and out with little information given as to their importance to the leads; and whole scenes look randomly assembled, able to be inserted and deleted with little effect to the plot. It's never a good sign when you can imagine a film being screened with its reels out of order, and it not making a whit of difference. I respect when a filmmaker tries to do something different, but creative self-indulgence on such a grand scale just feels needlessly wasteful.
Mary Kay Place (Mary Hartman, Mary Hartman) and Barry Primus (Puzzle of a Downfall Child) play peripheral characters whose significance to the plot varies significantly depending on which cut of the film you've seen.

WHAT I LOVE ABOUT THIS FILM
Given my criticisms, musical. To his credit, Scorsese doesn’t mock or cynically hold himself superior to the genre. He really appears to respect the dramatic and emotional potential of musicals and clearly has an affinity for their dream-factory allure. If anything,  makes a good argument for the unpopular theory that, in terms of professionalism mastery of craft, contemporary directors can't hold a candle to even the most journeyman studio-contract directors of the past. 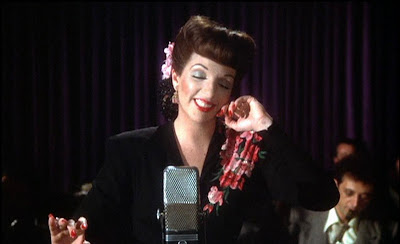 PERFORMANCES
This is the first love story I’ve ever seen that had the audience on its feet cheering when the lovers DON’T end up together! I’m really not equipped to judge Robert De Niro’s performance because the character he plays is so detestable I can’t tell if De Niro is simply miscast, or if he thinks his creepy stalker act is actually supposed to be charming (sad to say, but I've known many women -and men- who would willingly put up with such behavior if the guy looked like De Niro). What I can speak to is how terrific Liza Minnelli's performance is. I think it's her absolute finest post-Cabaret film work, and she is in the best voice of her career. Though ill-served by the script, she is exactly right and a perfect fit for what should have been the role of a lifetime and another Oscar nomination. After spending most of her career trying to distance herself from comparisons with her mother, Minnelli just goes all Garland on us here, and the results are fantastic. Any warmth and heart that the film has is chiefly due to her. 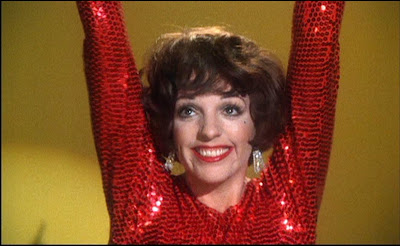 THE STUFF OF FANTASY
On par with how far afield this film goes emotionally, is how superbly the film works musically. Scorsese handles the musical sequences surprisingly well and displays a real knack for the ways in which music can be seamlessly integrated into a narrative. The score is chock full of great postwar standards, and the new songs by Kander & Ebb () are among their best work. That the terrific title song failed to get an Oscar nod, and was otherwise largely ignored until covered by Frank Sinatra some two years later, attests to the level of public indifference New York, New York was met with on its release. 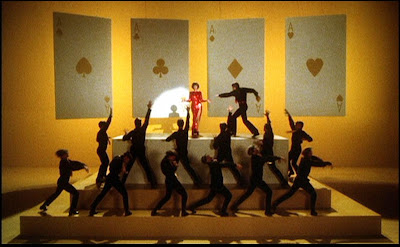 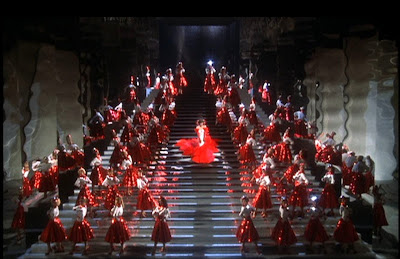 THE STUFF OF DREAMS
Some people can forgive a film anything if there are lots of explosions or chase scenes. Me, I'm a sucker for a film that's beautiful to look at. Cinematographer Laszlo Kovacs (Easy Rider), costume designer Theadora Van Runkle (Bonnie & Clyde), and production designer Boris Leven (West Side Story) give New York, New York a period gloss that almost, just almost, makes up for the fact that, while all dressed up, the film ultimately has nowhere to go. 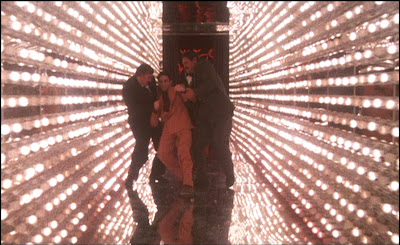 Obviously, everything I've written about  are the impressions I was left with after I saw the film. That's the fair bargain struck between the filmmaker and the movie-goer: let me have your attention for a couple of hours (or three) and you are free to take from this experience what you will, pro or con. That's straightforward and honest to me. I invest my time, they invest their ideas and inspiration. What pisses me off is when I've invested my time and it's nakedly apparent that the movie I'm watching is a product of pitch meetings, dealmaking, and ledger sheets.

Which is precisely why, flawed as it is,  still remains such a valuable piece of cinema to me. Love it or hate it, whether you think it's courageous or foolhardy, there's no getting around the fact that Scorsese was at least trying to do something interesting. Who's to say what part drugs and addiction played in giving the final film its hodgepodge feel (reports lean toward considerable); but I like that it's so obviously the work of someone vitally excited by filmmaking. The missteps are easier to take when there is some passion on display. I'll take a wrongheaded, artistically well-intentioned flop over a calculated, market-researched blockbuster any day. 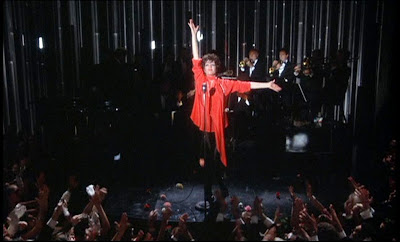 THE AUTOGRAPH FILES
By the way, I was one of the many who went to see Ms. Minnelli at the Orpheum Theater that summer in 1977, and stood out by the stage door to get the photograph below autographed by both Scorsese (lower left) and Minnelli (w/smiley face). Considering all the pressures of the show, the movie, and everything else, you couldn't have met two nicer people. 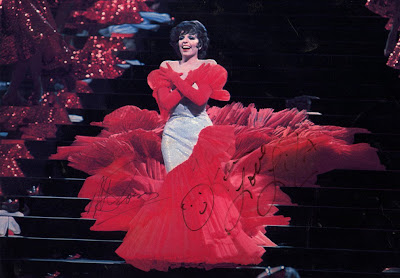