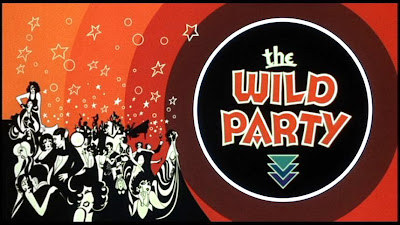 It's a common practice in movie star autobiographies to blame one's career stasis on rigid typecasting imposed by myopic producers and a narrow-minded public. Hypothesizing extravagantly (while never having to actually make good on the assertion),  said movie star diverts attention away from a monochromatic body of work by insisting that the untapped wellspring of versatility and range that lies deep within them has been grossly overlooked & underutilized.

Which brings us to the topic of the magnificent Raquel Welch. She, of course, was the reigning, uncontested cinema sex siren of the '60s and '70s, but, like many a sex symbol before and after, Welch spent a great deal of her offscreen time publicly venting her frustration at not being taken seriously as an actress. Finally, in 1974, Ms. Welch's long-held ambition was realized when an offer came from the burgeoning art-house team of Merchant/Ivory (A Room with A View, Howard's End) to star in their film adaptation of Joseph Moncure March's 1928 blank-verse poem of jazz-age debauchery: The Wild Party.
With the film's locale switched from to early sound-era and the narrative tweaked to suggest the notorious Fatty Arbuckle scandal of 1921, The Wild Party casts Raquel Welch as Queenie, a former vaudeville dancer, now the ornamental mistress/punching bag of mercurial silent screen comic, Jolly Grimm (James Coco). Once the king of Hollywood, Grimm is in a career decline brought on by too much booze and too many bad films, so in a pathetic, last-gasp effort to resuscitate his flagging career, Grimm throws a lavish bash at his Hollywood mansion to launch his already-dated comeback vehicle, "Brother Jasper" - a misguided comedy biopic about Franciscan Brother Junipero Serra.


The film jumps in and out of voiceover narration and straight-to-the-camera, fourth-wall breaking exposition, using the March poem to provide backstory for the events occurring onscreen (the poem, in rhythm and language, lamentably recalls the doggerel poetry of Bonnie Parker in Bonnie & Clyde). In fact, abrupt shifts in tone become something of a leitmotif in The Wild Party due to the film trying to be too many things (drama, tragedy, comedy, romance, musical) yet failing to arrive at a single stylistic method by which to make any of them work.

appily, a movie doesn't have to be good for me to like it, it just can't be bad. So what's a bad movie? A bad movie is one bereft of ideas or a point of view. A lazy creation that panders to the obvious & coddles the established. It's a demographic-driven, corporate-committee product designed to fill seats, sell merchandise, and reap profits...period.  When a movie has something on its mind or is inspired by some original creative impulse, I find it difficult to dismiss it completely out of hand. If one searches hard enough, one is likely to find even a tiny flash of brilliance within films that (putting it in the most charitable terms) fall short of their ambitions.


WHAT I LOVE ABOUT THIS FILM
Though too stylistically discordant to be considered a really good film, The Wild Party is nonetheless very entertaining simply because the core dramatic construct of its plot (the one they should have focused on) is so effective. A  palpable sense of emotional jeopardy and conflict is forged in having a socially innocuous event like a party occasion the bringing together of several disparate, desperate characters with at-odds desires.

The Wild Party is built on a dramatically provocative premise, but the screenplay and a good many of the performances have a naïf quality about them which prevents the film from saying anything really significant about the moral decay that lies beneath 's glamorous image of itself. I think John Byrum's Inserts, a small, forgotten film about pre-sound that was also released in 1975, is the decadent, despairing image of lost fame and hopeless desperation that The Wild Party sought to be.


PERFORMANCES
By rights, the role of Queenie should have been Raquel Welch's turnaround role, like They Shoot Horses, Don't They? was for Jane Fonda, or Carnal Knowledge for Ann-Margret. It's a great part affording the actress several introspective monologues, a broad range of emotions to play, and even an opportunity to sing and dance. And in portraying a wounded character whose great beauty has proved both a blessing and a curse, Welch even gets to mine that "blurs-the-line-between-fantasy-and-reality" quality that audiences usually eat up.

Well, as much as I'd love to report that Welch rises to the occasion in The Wild Party (it is her best screen performance, but I think that might be faint praise), she elicits from me a response similar to the one I have when I see an Ali MacGraw movie: I get angry and frustrated that she doesn't try harder.

Sure, Welch is let down by a weak script that has her talking about her feelings more than showing them, but after so many years of claiming that she had never been given a chance to "show her stuff," dramatically speaking, Welch should have nailed her characterization in spite of the poor writing. Instead of a sustained performance, we see brief flashes that are so good they only leave you wondering what could have been possible had she really let herself go.
One problem for me was that there's just no vulgarity to Raquel Welch's Queenie. Without a touch of crass earthiness to offset her incredible beauty (think Sophia Loren) Welch's Queenie comes across as far too self-assured and lacking in the kind of vulnerability that would have made her character touchingly tragic. Instead of being the kind of raucous, life-of-the-party that would captivate a manic-depressive like Jolly, Welch's Queenie is far too regal. There's an awkward self-consciousness to her attempts at appearing carefree or tough (the scene where she threatens to hit Coco over the head with an art-deco clock is so embarrassingly amateurish that it looks like an outtake that somehow made it into the movie) that deprive her character of any real depth. I really wanted to buy Welch in the role and I think she has it in her to be better than she's allowed herself to be onscreen, but here I think she required either a more talented director or she needed to give herself permission to let go and trust.


THE STUFF OF FANTASY
It's perversely fascinating to me that The Wild Party (which already has its hands full just being a drama) is also a musical! The songs, by the over-extended Walter Marks (composer of that enduring Sammy Davis, Jr. anthem, "I've Gotta Be Me!", Marks also makes his debut as a screenwriter with "The Wild Party" ) are a mixed bag. Too frequently they kill the mood or render poorly-staged scenes comical, but I have a soft spot for song and dance, so the silly musical numbers are among my favorite parts of the film.

THE STUFF OF DREAMS
The Wild Party was just one of the many period-film releases that came out during the nostalgia craze of the '70s ( Paper Moon, The Great Gatsby, The Day of the Locust ).  I was a teenager working as an usher at the Alhambra Theater in when The Wild Party premiered, so with near-empty houses daily, I got to watch the film many times. 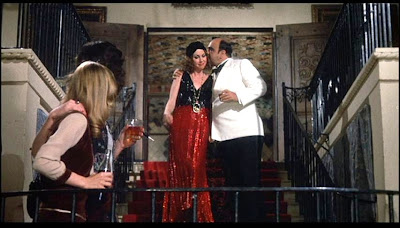 From the That-Dress-Gets-Out-More-Than-I-Do files: A consequence of my seeing The Wild Party so many times was noticing that a gown worn by an extra in that film (top photo), was the same gown first worn by Julie Andrews in the 1968 movie musical, Star! (below).


Even in its butchered, American-International Pictures form, I enjoyed the film very much, although it never engaged me very deeply on an emotional level. A better film, I think, than the multimillion-dollar Gatsby, The Wild Party is beautifully shot and, if not involving, certainly intriguing in its employment of cringe comedy for dramatic effect. It's fascinating to see the film now, some 36 years later, with the "director's cut" version of The Wild Party available on DVD. With footage restored and re-edited, The Wild Party is a significantly different and improved film than the one I saw back in 1975. 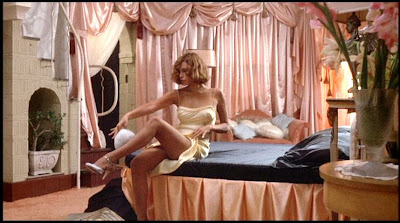 And even if it still falls shy of being what I would call a really "good" film and didn't provide Ms. Welch with the breakthrough role I wish it had, I can't complain. After all, Raquel Welch just being Raquel Welch isn't really all that bad.