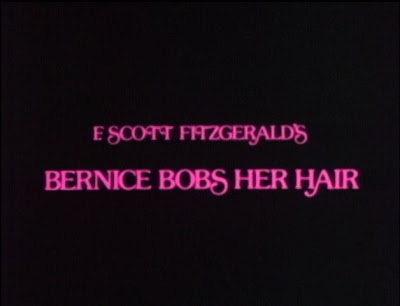 Bernice Bobs Her Hair, F. Scott Fitzgerald’s satirically comic, finely observed 1920 short story about feminine identity in the emergent jazz-age, can be read in less time than it takes to watch this exceptional made-for-TV short film adaptation. A movie clocking in at a little over 48 minutes, Bernice Bobs Her Hair is a disarmingly witty little film that offers more food for thought, first-rate performances, snappy dialogue, and keen period detail than most films three times the length and ten times the budget.


The moneyed idleness of finishing school girls and prep school boys on summer holiday in Connecticut is a ritualized flurry of status-defining social activities which have about them the contradictory quality of simultaneously relieving and heightening the boredom. The time is 1919; the very brink of flaming youth, flappers, jazz, and silent movie vamps. While the conventions of mannered society are stringently observed by young and old alike, those teens fumbling most uneasily on the verge of adulthood can’t resist exercising their newfound independence through small acts of social rebellion.
Among the debutante set, this means engaging in (and trying to navigate one’s way through) behaviors that walk a tightrope between popularity-enhancing daring and ostracized-by-one’s-peer-group scandalousness.

It’s August, and all-around “fun” girl and social hub Marjorie Harvey (Veronica Cartwright) is having her summer fairly ruined by visiting cousin Bernice (Shelley Duvall). In contrast to the well-liked Marjorie who has mastered and understands the seemingly endless little gambits and ploys a girl must practice in order to convey availability through the highly contrived appearance of unavailability, Bernice is dull to the point of distraction. A well-heeled socialite from Eau Claire, Wisconsin, Bernice nevertheless suffers from shyness and an overabundance of the kind of genteel femininity that was swiftly becoming passé in the pre-flapper era of the early '20s.

An eye-opening conversation overheard by Bernice (“I didn't mean to listen…at first”) between Marjorie and her mother (Polly Holliday) compels the visiting cousin to grudgingly allow herself to be taken under Marjorie’s wing for a thorough personality overhaul. What follows is a cross between Pygmalion, the finale of Grease, and the “Popular” number from Wicked, as Marjorie coaches Bernice in all the finer points of being a sought-after modern woman. As the summer progresses Marjorie proves herself a master educator… but does Bernice perhaps learn her lessons all too well?

WHAT I LOVE ABOUT THIS FILM
The distancing effect of Bernice Bobs Her Hair’s period setting works to the film’s advantage, allowing for a kind of clear-eyed, dispassionate assessment of  laughable social mores not always possible (or welcomed) when the lens of satire is trained on contemporary fads and trends. Additionally, the notion that one’s parents and grandparents might have been plagued by the same adolescent insecurities and pressures to conform that we’ve experienced provides both historical perspective and reinforces the cyclical nature of human behavior.

When Bernice Bobs Her Hair first aired in 1976 as part of the PBS The American Short Story anthology series, the film was viewed through the prism of mid-70s second-wave feminism (those years when the initial strides of Women’s Lib began to take root, culturally). With films like Alice Doesn’t Live Here Anymore (1974), The Stepford Wives (1975), and A Woman Under the Influence (1974) reflecting the evolving cultural prominence of women in the 70s, the duplicitous, restrictive, male-centric behavior of the young women at the center of Fitzgerald’s story appeared foolish, outmoded, and as unlikely for a comeback as the bustle.

Well, here we are in the year 2012, and the litany of silly “how to get a man interested” rules and stringent feminine “dos” and “don’ts” at the center of Bernice Bobs Her Hair (each presuming some innate female inadequacy) look positively dignified in light of the self-loathing tyranny of today’s porn-star aesthetics (boob jobs, botox, and trout-pout); reality shows like “The Bachelor”; how-to-catch-and-keep-a-man books like “The Rules”; and pop star Rihanna’s turn-the-other-cheek-for-the-sake-of–a-buck brand of subtly sanctioned female battery.

If statistics on bullying, suicide rates, and girls opting for plastic surgery at ever younger ages are to be believed, I’d say, culturally speaking, young women’s attitudes about themselves and their bodies have taken several steps backward since the days when a girl only needed to brush up on the latest dance steps and apply a red jellybean to her lips to be a contender for popularity.
1940s Bernice Wears Slacks to School
1950s Bernice Goes Out Without Gloves
1960s Bernice Buys a Mini Skirt
1970s Bernice Grows an Afro
1980s Bernice Gets a Mohawk
1990s Bernice Gets a Piercing and a Tattoo

PERFORMANCES
As previous posts will attest, I am thoroughly besotted with Shelley Duvall. Here, as she did so artfully in Robert Altman’s 3 Women, Duvall brings an oddball stamp of pluck and silent self-regard to characters who, as written, would otherwise be pitiable or pathetic. Duvall’s Bernice may be socially withdrawn and ill-at-ease around members of the opposite sex, but it’s clear she holds an opinion of herself more solidly defined than that of her rather superficial cousin. Bernice’s willingness to undergo a personality makeover is born more of a kind of misdirected introspection (there’s a scene wherein she more or less encounters herself in male form—the reserved and judgmental ministry student, Draycott Deyo) than poor self-esteem.

I don’t believe there exists on film an uninteresting Veronica Cartwright performance. Splendid in Alien and Invasion of the Body Snatchers, as the vain and spoiled socialite of Bernice Bobs Her Hair, Cartwright displays a comic timing and command of expression and inflection that lends bite to her scenes of bitchiness and real humanity to those moments that reveal the coward behind the monster. Her scenes with Duvall are marvelously engaging in their chemistry.

The character of Yale undergrad Warren McIntyre is sketchily drawn in Fitzgerald’s story, but as embodied by baby-faced Bud Cort (the victim of Shelly Duvall’s betrayal in Altman’s Brewster McCloud, but better known for Harold & Maude), Warren is a mass of post-adolescent agitation and self-seriousness. Wearing the expression of one perpetually amazed by the depth of his own emotions, Cort mines pure comic gold in fleshing out an otherwise stock Ivy League character.

THE STUFF OF FANTASY
Someone once said that it’s the responsibility and privilege of the young to blaze new trails and challenge social convention, for in nonconformity lies progress. What’s fascinating to ponder is how significant a role hair and hairstyles have played in the shattering of social conventions throughout history.

As was the style of the day, the socialites in Bernice Bobs Her Hair sport mountainous piles of hair. The numerous scenes of women fussing and tending to their hair dramatizes the dichotomy posed by the narrative. Long tresses may be a badge of femininity and old-world gentility, but its need for constant care inhibits spontaneity and freedom. The short bob haircut requires minimal care and seems ideal for the more active modern woman, but its lack of society precedence and its too-close association with silent-screen “vampires,” brands the haircut instantly scandalous (aka, rebellious). 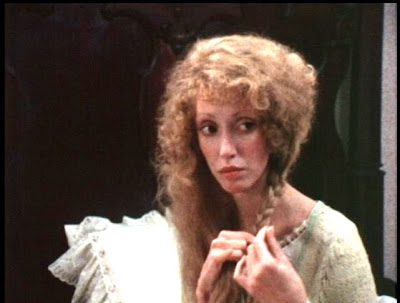 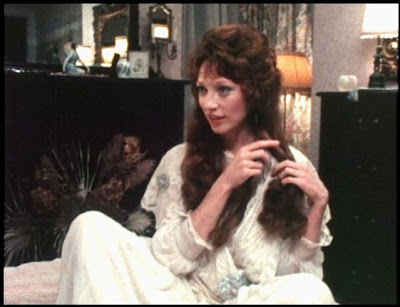 Braiding is a motif repeated so often in Bernice Bobs Her Hair that the ritual begins to take on the weight of metaphor - the braids come to resemble ropes tying the women to constrictive notions of femininity.

THE STUFF OF DREAMS
One of my favorite exchanges in the F.Scott Fitzgerald short story didn’t make it to the film.

Marjorie’s mother is trying to make sense of the fuss Marjorie is making over Bernice not fitting in with her social crowd. From where Marjorie’s mother sits, there’s not much to be gained in the shallow approval of people who scarcely seem interested in you in the first place.
Mrs. Harvey: “What’s a little cheap popularity?”
Marjorie: “It’s everything when you’re eighteen!”

And so it is. The world of an eighteen year-old will undoubtedly expand, but for that brief moment in time (which can feel like an eternity) when one’s entire universe is inhabited exclusively by immediate family and the kids you go to school with, the petty concerns of popularity and peer acceptance can take on the importance of world-turning events.
There's no way to watch Bernice Bobs Her Hair without acknowledging, time and time again, how little has changed in the realm of human interaction since 1920. Whether this is comforting or disturbing news is another matter.
Bernice: "My philosophy is that you have to either amuse people, feed 'em, or shock 'em!"
Those words, written in 1920, could literally be Lady Gaga's mantra.