One of the things I liked most about Pauline Kael was how much her passion for film mirrored my own. Poking fun at her own pseudo-sexual obsession with movies in the titles of her books: I Lost it at the Movies, Going Steady, Reeling; Kael, the late film critic for The New Yorker, was in a class by herself when it came to legitimizing the sensual side of that inter-sensory experience we call moviegoing.
I'm a huge film fan and it’s easy for me to enjoy a (reasonably) wide spectrum of movies from perspectives both academic and intellectual. But in order for me to truly fall in love with a movie, it has to hit me on some deeply visceral, highly subjective emotional level. It has to contain what I call “the goosebump moment”; a spontaneous physical/emotional response (it needn't last more than a moment) independent of aesthetic qualifiers. A moment in the film that engages my heart, spirit, or imagination in a way that overrides the cerebral. That takes me to a place where I’m “experiencing” a film more than just watching it.
In Goodbye, Columbus, my goosebump moment occurs less than two minutes into the film. It's when this rapturous vision called an Ali MacGraw dives into a sun-dappled pool of water and becomes, right before my eyes and in dreamy slow-motion, the ethereal vision of what “love at first sight” feels like. This almost Freudian commingling of woman, water, and weightlessness (infinitely enhanced by the very 60s sound of the pop band The Association on the soundtrack) rates right up there with Barbarella’s zero-gravity striptease as one of the most erotically-charged title sequences I've ever seen.
Of course, I wasn't the only one who fell in love with Ms. MacGraw that spring of ‘69. My infatuation fell somewhere in line behind Richard Benjamin’s onscreen character; Paramount production head Robert Evans (who would wed MacGraw later that same year); and what seemed at the time to be the entire population, male and female, of North America. Goodbye, Columbus was the film debut of both of its leads and several supporting characters, but it was former fashion model Ali MacGraw who emerged the instant superstar of the '70s. Revisiting this film 43-years later, it's still easy to understand why.

Goodbye, Columbus (adapted from Phillip Roth’s 1959 bestselling debut novella) is one of the best of the coming-of-age films to come out of the glut that flooded the market in the wake of The Graduate. It's a seriocomic look at Jewish identity, class-conflict, and changing sexual mores as seen through the prism of a heated summer romance between Bronx poor-boy Neil Klugman (Benjamin) and nouveau riche Westchester goddess, Brenda Patimkin (MacGraw).

Controversial on release due to sexual explicitness and what was perceived by some to be an offensive depiction of Jewish culture; today (in light of four decades of Woody Allen’s patented brand of ethnic self-loathing and the current trend for masking racial insensitivity behind attitudes of anti-PC nonconformity) Goodbye, Columbus feels really rather restrained and surprisingly gentle-natured. So much so that the once R-rated film was re-rated PG for DVD release (and contrary to internet rumors, the PG-rated DVD version is not a censored version of the 1969 theatrical release. I saw the film in its original release and the DVD is identical). 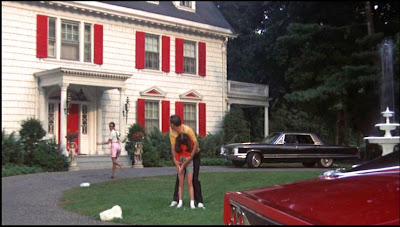 Perhaps because it trod a trail similar to that blazed by The Graduate two years earlier, or because its satirical take on Jewish identity and class assimilation is too dated or insubstantial for it to gain cult status; but over the years, Goodbye, Columbus, a huge hit at the time, has somewhat faded from the public's memory. Puzzling, because the film is smart, insightful, funny as hell, and contains the best screen performances of several members of its cast.


WHAT I LOVE ABOUT THIS FILM
Arnold Shulman’s deservedly Oscar-nominated screenplay for Goodbye, Columbus is a slavishly faithful adaptation of Philip Roth’s novel - a library paperback copy of which I carried to Junior High School with the intention of poring over the “dirty parts” with my friends during lunch period. I've seen many films about romances between rich girls and boys from the wrong side of the tracks, but in being set against the backdrop of middle-class Jewish-American assimilation, the sometimes over-broad ethnic comedy of Roth’s social satire is mitigated by a great deal of emotional poignancy.

Neil Klugman and Brenda Patimkin are no Romeo & Juliet, but they’re certainly a young couple who start out on a romance with several strikes against them. I’ve always thought the sexual aspect of their relationship figured so prominently in the film because Neil and Brenda’s courtship is fueled by a great deal of sexual chemistry, yet fueled, at the same time, with a considerable dose of suppressed hostility and rebellion. Neil, refined, college-educated, almost passive-aggressive in his aimlessness, contrasts dramatically with the go-getter Country Club types Brenda usually dates. Neil’s humble Bronx background may mirror that of Brenda’s crass-but-sweet father (Jack Klugman), but his lack of ambition represents everything her upwardly-mobile family (they've only recently struck it rich through Mr. Patimkin’s plumbing-fixture business) is trying to leave behind them.

Neil’s attitude towards Brenda is not much better. Like one of those guys who courts the prettiest, sexiest girl in school only to spend a lifetime berating her for cashing in on her looks; Neil purports to be in love with the rich, spoiled, daddy’s girl, but rarely lets a moment pass where he isn't critically teasing her about her values and priorities. Whether it be her nose job, contact lenses, the shallowness of her friends, or the empty values of her parents, there’s a thinly veiled aggression to his jibes which makes you wonder if perhaps he’s not drawn to her out of some barely acknowledged desire to punish American Jews who seek to deny their Jewishness.

This is why I've always had a thing for Goodbye, Columbus and why I’m surprised its reputation never remained in step with other seminal films of the '60s. It’s a romantic comedy, yes; a coming-of- age film, certainly; but it’s also a provocative look at class-conflict and a thoughtful exploration of a very real issue facing ethnic groups during the social upheavals of the 60s: If, after years of struggle, the “American Dream” is at last working for your historically disenfranchised parents, what duty do you have to support them (or be grateful), or is it your obligation to be true to the natural youthful instinct to rebel?


This was certainly an issue for me as an African-American youth. My parents (staunch assimilationists) were realizing the American Dream just at the cusp of the Black Power movement. By the mid-'70s we had moved into a tony, predominantly-white, upper middle-class suburb and realized all the benefits my grandparents had fought so hard for. Was it my place to confront my parents with arguments about  "The Simple Life" and the folly or embracing materialistic values, when they had struggled and fought so hard to overcome these very things? And in the pursuit of assimilation into the larger culture, what unique values of character and authenticity did we lose or compromise? Goodbye, Columbus has been labeled superficial by many critics, but I have always seen at its core, a terrifically thorny social issue entertainingly addressed. 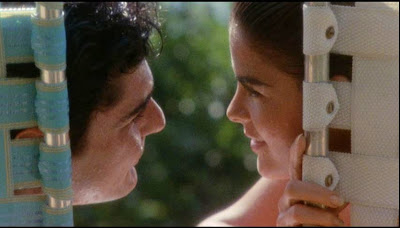 PERFORMANCES:
In her 1991 memoir Moving Pictures, Ali MacGraw makes no bones about her limitations as an actress, and this is of course true (although she’s extremely good in 1980’s Just Tell me What You Want). But being limited isn't the same as being bad. MacGraw may not have range, but she has presence, star-quality, and, under the guidance of a particularly strong director — as she seems to have here with Larry Peerce — she can be a very effective actress. She's beautiful to be sure, but the character of Brenda is supposed to convey a sharp intelligence and sense of self-possession which suggests to Neil that she herself seeks an alternative to the stultified life her parents want for her. MacGraw captures this quality extremely well. Perhaps it’s because she’s playing a typed role, but I like Ali MacGraw’s performance in Goodbye, Columbus more than any other in her career.

THE STUFF OF FANTASY:

I don’t want to give the impression that Goodbye, Columbus is a deeply serious drama. It’s really an at-times hilarious comedy of manners which offers more than the usual food-for-thought for the typical '60s Generation Gap film. Some characters may seem a tad broadly drawn, but (more's the pity) I can’t say that there’s a single individual or type in this film that I haven’t actually encountered at some time in my life. Some within my own family!

I’m aware that many of the things I’m fondest of in Goodbye, Columbus (the Charles Fox music score, the montages, the class-distinction humor, the appeal of Ali MacGraw) are the very things that don’t resonate very strongly with audiences today. Still, there is much in the uniformly fine performances and witty screenplay that makes me categorize Goodbye, Columbus as something of a neglected classic. If the film has any flaws, perhaps its biggest (and ultimately costliest) is in laying on the ethnic humor so heavily that some of the more thoughtful, perceptive points of Roth's novel are lost or at the very least, blunted.

I've already written in this blog about You’re A Big Boy Now and The Graduate as being two of my favorite 60s coming-of-age films, but as much as I enjoy and admire those films, Goodbye, Columbus is not only the funniest, but most emotionally satisfying overall. If one cares to look beyond the occasionally overstressed humor, it's a movie that really has a lot on its mind and a lot to say. Also, I can't ignore the fact that it's the only film of the three to have given me my “goosebump moment.”
Filmed almost exclusively in two-shot during their romance, Brenda and Neil's eventual estrangement is dramatized in a scene where they're denied the sharing of the same frame. They at last realize that they are from two different worlds.