LENA HORNE: THE LADY WHO LUNCHED

In one of the few instances I can recall from my youth where everyone in my family was in agreement over what movie to see (and as there were five of us, this was a rare occurrence, indeed), one Friday evening my dad fired up the trusty Oldsmobile and took us all to San Francisco’s Northpoint Theater to see That’s Entertainment in 70mm and Six-Track Stereo.

It was 1974, and I was a 16-year-old, self-styled cineaste in the first blush of a full-tilt, head-over-heels love affair with The Movies. And if my adolescent over-earnestness was made obvious by a myopic preference for the films of the 60s and 70s above all others; I have Ken Russell’s charming 1930s musical pastiche, The Boy Friend (1971) to thank for opening my eyes to the joys of second-hand nostalgia and for awakening the latent classic film fan within. 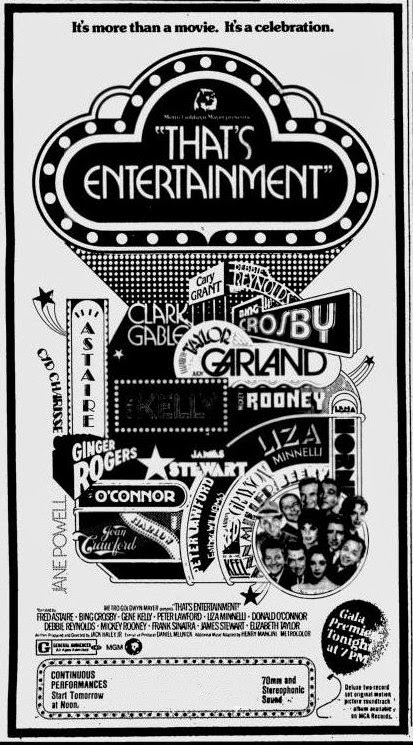 That’s Entertainment, a compilation film highlighting 50 years of MGM musicals through clips and misty-eyed reminiscences by Golden-Age stars, was one of the few examples of the real thing to emerge out of the largely revamped/revisionist nods to the past that typified the 70s pop culture nostalgia craze (The Great Gatsby, The Way We Were, Happy Days, The Divine Miss M, et al.)
Released at a time when the public’s appetite in films ran chiefly to disaster movies, black-themed dramas, irreverent comedies, and kung-fu actioners; That’s Entertainment – part Old Hollywood eulogy, part tribute to the very sort of escapist, purely-for-entertainment, studio-system fare the New Hollywood aimed to discredit – tapped into something in the cultural zeitgeist that sought relief from the tensions of Watergate, Vietnam, inflation, and the oil crisis. Its intentions made explicit by the poster tagline: “Boy. Do we need it now,” That’s Entertainment was originally conceived as G-rated counter-programming for the largely-ignored elder demographic; but the film’s reverent, gently self-mocking tone and invitation to “Forget your troubles, c’mon, get happy!” proved irresistible to young and old alike. The relatively low-budget That’s Entertainment became one of the top-grossing films of 1974.
For a youthful disciple of the auteur theory like me, That’s Entertainment represented an unexpectedly welcome change from all the sturm und drang of post-classical cinema, reminding me what a joy it was just to have FUN at the movies for a change.

I saw That’s Entertainment several more times that summer, standing foremost in my mind being the memory of the unrecognizably young Joan Crawford always drawing the film’s biggest laughs with her “spirited” Charleston; the way the lively “Varsity Drag” number from Good News always put a smile on my face; and how surreal and marvelously loony those Esther Williams water extravaganzas seemed to me.
But in the end it was one of the non-musical moments of That’s Entertainment that ultimately made the strongest and most lasting impression on me. It's only a few seconds long, but it stood out like a beacon, and the image haunted me for many years after.
In newsreel footage documenting a massive luncheon thrown by MGM in 1949 to commemorate its 25th Anniversary, a slew of the studio’s biggest contract stars are lined up and seated … not unlike ducks in a shooting gallery  … at a bank of tiered dining tables. As the camera dollies along the aisles capturing the stars in various states of conviviality (Ava Gardner & Clark Gable), mortification (Errol Flynn), clowning (Buster Keaton), or chowing down heartily (Angela Lansbury); we’re given a fleeting glimpse of Lena Horne, seated between Katherine Hepburn and an actor I believe to be Michael Redgrave.


What burned a hole in my retina and seared a tattoo on my 16-year-old mind was the look on Lena Horne’s face: She’s not having any. Seriously. In stark contrast to That’s Entertainment’s sparse parade of subordinate black performers (and regrettably, but inevitably, white performers in blackface) wearing beatific smiles, eager to entertain, grateful merely to be allowed to “sit at the table” (in Ms. Horne’s case, a term both literal and figurative); there sat this (very) solitary black woman, poised, dressed to the nines, and displaying a self-possession and look of utter disdain that, in context with the place and time, looked to me like nothing short of an act of militancy.

It was more than the fact that she wasn’t smiling. It’s that she held herself with this kind of removed, regal aplomb while assuming a wilfully casual posture that communicated to any and all that she wasn't on exhibit and wasn't going to be putting on a show for anybody’s benefit. Her expression: a raised-eyebrows/lowered eyelids combo familiar to anyone who’s ever been sized-up; her jaw: set; her gaze: cool. Lena Horne had flipped the script, folks. The one on display was doing the judging. Miss Lena Horne, to use the vernacular, was a diva throwing shade.
(Horne, whose ongoing battles with MGM have been well-documented in several biographies as well as her as-told-to 1965 autobiography, Lena, was at the end of her seven-year contract with the studio when this footage was shot, so by this point she was fairly fed up with the studio and obviously didn't care who knew it.) 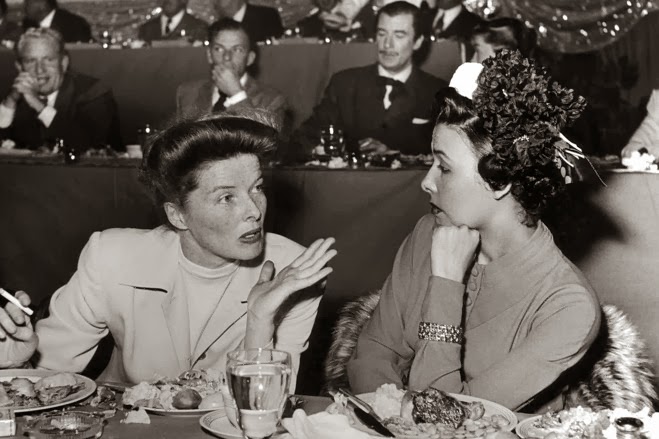 And that’s precisely what struck me most about this sequence. Lena Horne at that table – subtly rebellious in the simple act of daring the camera to capture who she was at that moment, not what the studio wanted her to be – was the first glimpse of a contemporarily recognizable black reality I had ever seen in the context of classic film.

As a teen, I’d watched many old movies on TV, but I'd never seen a single image of a black person in any of those films whom I even recognized, let alone could relate to. The shuffling, smiling, obsequious blacks that appeared on The Late, Late Show bore no resemblance to me or anyone I’d ever met or known. They seemed strange and alien to me, the blatant disrespect and caricature inherent in their depiction and representation in no way nullified by their frequently being imbued with near-superhuman levels of kindness and compassion. These images were lies, and my resistance to them inhibited my exposure to classic film (pre-1950s films) for many years.

So while I wasn't sure then, I now understand why Lena Horne in that brief bit of black & white newsreel footage from That’s Entertainment stayed with me over the years. I was responding to the "truth” she presented. In place of the fetishized ebony goddess segregated to stand-alone cabaret sequences in all-white musicals (all the better to be excised from prints screened in the South) or the ornamental siren in well-intentioned but patronizing all-black epics, I saw a glimpse of a real black woman reacting authentically and appropriately to her circumstances and surroundings:

“I disconnected myself to shield myself from people who would sway to my songs in the club and call me ‘nigger’ in the street. They were too busy seeing their own preconceived image of a Negro woman. The image that I chose to give them was of a woman who they could not reach and therefore can’t hurt.” - Lena Horne

I would come to learn that such candor was a hallmark of Lena Horne, a pioneering actress/singer of astounding fearlessness whose battles with racism, sexism, and institutionalized ignorance have earned her the labels "embittered" and "hard" in many a biography, but which qualify her as a warrior and hero in my book. (Similar behavior attributed to an actress like Bette Davis is called being a "fighter" and a "survivor.")

It’s not exactly the easiest thing being both an aware African-American man and a huge fan of classic film. Often it means finding ways to make peace with wonderful movies that nevertheless include disrespectful, ofttimes painfully degrading racial clichés and promote heinous stereotypes. It means having your comments on the topic downplayed by missing-the-entire-point comparisons (“The marketing of stereotypes is Hollywood's stock in trade!"), or minimized by over-broad generalizations (“That’s how they thought back then. You gotta overlook it!”).


It means you sometimes have to be “that guy” who brings up the alternative point of view at a Gone With the Wind screening or Busby Berkeley film festival (Berkeley had a distinct fondness for blackface numbers), or you’re Mr. Buzzkill who’s accused of politicizing the arts when you contradict the suggestion that the largely all-white world depicted in classic films reflect a “simpler, gentler time.”  You're the wet blanket out to subvert people’s cherished memories of sweet-natured mammies, childlike slaves, and benevolent servants; and you’re the PC guy who insists on applying contemporary attitudes to works that are essentially historical records of cultural attitudes of the time in which they were created.
But films are not frozen in time, they live. And to me it's an important part of the cinema experience to continue to see the old through new eyes.

What I saw in Lena Horne's very contemporary rebellious spirit paved a way for me to see the humanity behind black stereotypes in movies I'd previously felt so offended by, I simply shunned them. I have since developed a profound respect for the black actors who had to play these roles, knowing that it couldn't have been easy, and in many instances, must have been soul-killing work. Lena Horne may not have been the first black actor to refuse to play maids or servants, but she certainly must have been one of the few to still have her job after doing so.

Today, when I look at that clip from That’s Entertainment, I am impressed as hell with Lena Horne's attitude. She's a hero to me because at a time when nothing was expected of her but to be a sepia-toned fantasy object, she owned her anger, expressed her resentment, and voiced her outrage.  And that she did so a time when so many others couldn't ... well, for me, that just made her the biggest star MGM had on the lot that day, and certainly the most memorable and inspiring woman I saw on the screen that Friday evening back in  1974.