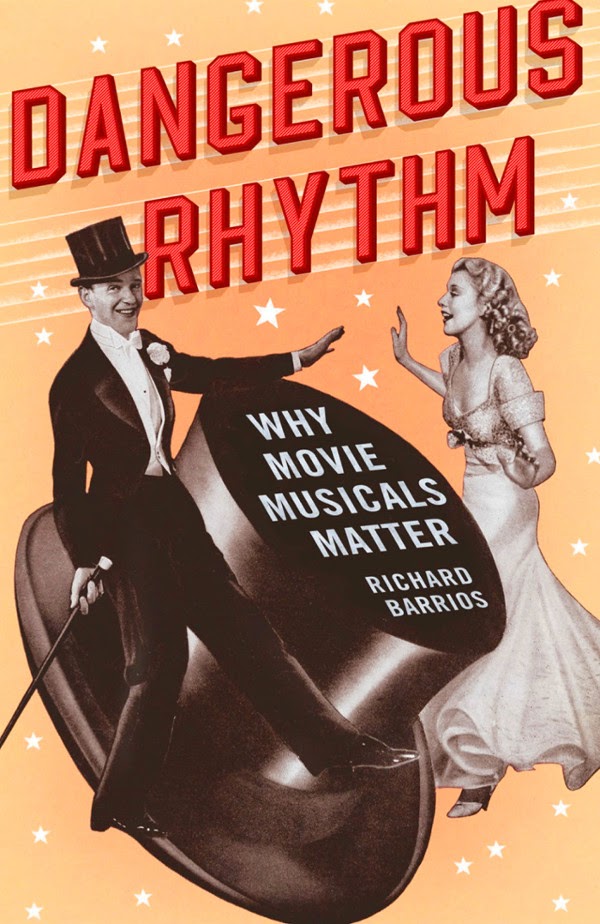 As one who can happily state that a movie musical was responsible for changing the entire course of my life (briefly: I saw Xanadu [yes, Xanadu] in my third year of film school; I was inspired to drop out and study dance. The result - a nearly 30-year career as a professional dancer and choreographer), it's fair to say that I’m perhaps the ideal audience for a film book with the subtitle: Why Movie Musicals Matter.

Dangerous Rhythm: Why Movie Musicals Matter is an exhaustive (and occasionally, exhausting) look at the American movie musical from the earliest Vitaphone squeaks of Jolson’s The Jazz Singer (1927), to the count-the-hairs-in-Hugh-Jackman’s-nose close-up bombast of Les Misérables (2012). Award-winning film historian, Richard Barrios, who’d already neatly expounded on the origins of the movie musical in his 1995 book, A Song in the Dark: The Birth of the Musical Film, broadens his scope considerably this time out – the result being an impressively well-researched crash course on the uniquely American art form known as the movie musical.

Essentially a series of chaptered essays dissecting the genre from perspectives practical (financial, technical) and aesthetic (artistic, pop cultural), Dangerous Rhythm, in covering so vast a topic from so many angles, can at times feel as if it is in danger of losing its way…but stick with it. Barrios writes with a surer hand than what might be initially presumed, and guides (as gracefully as Astaire) the reader through roughly eight decades’ worth of film history, analysis, and guilty-pleasure gossip, to the foundation of his studied and sound conclusion that movie musicals do indeed matter. The specifics of which you’ll have to discover for yourself.

Dangerous Rhythm: Why Movie Musicals Matter is academic and fact-filled enough to satisfy the most knowledgeable film scholar, yet informal and full of amusing and critical observations so as to please the armchair film buff and casual fan of the musical genre.

On critics' reaction to Lucille Ball in Mame – “...the words 'toneless' and 'croak' were frequently invoked."

On a certain disco musical  – “Like [Alan] Carr himself, Can’t Stop the Music was gay without thinking anyone knew….”

On Joan Crawford’s terpsichorean skills in Dancing Lady – “The epic shoulders are curious ballast for a thrashing upper body, the elbows eternally tense linchpins for arms that flail without cease.”

If you're a regular visitor to this blog, or just a fan of movies and musicals, I'm sure you'll enjoy Richard Barrios' DANGEROUS RHYTHM : Why Movie Musicals Matter.  That's why
I'm happy to announce that Dreams Are What Le Cinema Is For... is hosting a giveaway drawing for a free hardback copy of the book.

Entry is simple: just email your full name to me here at Ken@xanadu-fitness.com and list one reason why you think movie musicals matter (a prerequisite for entry in the drawing). The winner will be randomly drawn on Monday, June 23rd, 2014 and the winner notified immediately (no entries accepted after Midnight, Sunday June 22nd PST). After notification, the winner will be required to send me their full name and address, which will then be forwarded to the publisher's PR firm and the book mailed to you. The first name of the winner will be posted in an update to this blog post, along with any particularly interesting submitted reasons for why movie musicals matter.

So come on, enter to win your copy today!

UPDATE: WE HAVE OUR WINNER, FOLKS!!
From a random drawing of names submitted by June 22rd,
Larry W. of Nevada
is the winner of the free copy of
DANGEROUS RHYTHM:Why Movie Musicals Matter by Richard Barrios!!
Congratulations to Larry, and a BIG, BIG thanks to all who entered this giveaway and gave such thoughtful reasons for why musicals matter (you each would be getting a book, were it up to me).

The drawing was random, but everyone who participated gave such wonderful reasons why they thought movie musicals mattered. The sentiments in these three reader-submitted entries covered the topic nicely:

All movies are dreams-- some pleasing (Some Like It Hot), some nightmarish (Sophie's Choice), some a little bit of both (Wizard of Oz.)  But, they all speak to the unconscious as do our dreams.  Add to this experience the Movie Musical and even the dullest moviegoer's limbic system is hotwired directly into the wildest flights of fancy. Only in the movies do we have the experience, when our hearts are filled to overflowing with emotion, of exploding in song and dance, and it is the recognition of how right it feels to dance and sing when words will not suffice that makes Movie Musicals the absinthe of cinema.  That's why they matter. -Larry

Musicals matter because there are multiple ways to tell a story and by engaging the senses with color, sound, and rhythm (the rhythm of dancing and song, as opposed to the spoken word), a musical communicates on an entirely different level. For example, "Pygmalion" / "My Fair Lady" or "Romeo and Juliet" / "West Side Story")--one isn't necessarily better than the other, but the essential elements of the story are processed and received by our senses in vastly different ways.  -Deborah

'The truest things are said in jest' and perhaps this is the case of a musical as the medium. What is being communicated is an emotional truth of the character singing it - it may be light-hearted and humorous, or it might be a hard reality, but the guise of song makes it easy to communicate. -Mitchell


I couldn't have said it better. Frequently I'm told that one of the pleasures of  visiting this blog is reading the comments of the articulate, knowledgeable, and film-savvy readers. I have to agree. Thanks, everybody!


TOP 10 MUSICALS THAT MATTER (TO ME)
In honor of our giveaway drawing and the subject of movie musicals, I thought I'd compile my own (by no means comprehensive) list of musicals that matter to me. As for why these films matter, there are links to past posts. As for the new entries...well, those will have to wait for some future date.