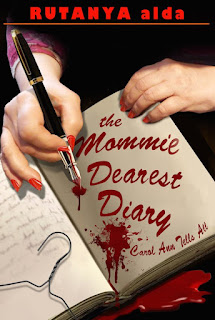 For worshipers of the enduring camp classic Mommie Dearest (and that’s pretty much all of us, am I right?), actress Rutanya Alda has, for the last couple of years, been something of a battle-scarred, in-the-trenches, cult-film missionary doing the Lord’s work. The Lord in this case being the Great God of Inadvertent Camp. Ms. Alda’s sacred trust: to preserve the legacy and answer the gay community’s clarion call (and make no mistake, the LGBT community is solely responsible for Mommie Dearest not disappearing into oblivion) of “What were they thinking?”

As cult film fans and connoisseurs of delectable camp already know, Rutanya Alda plays Joan Crawford’s devoted, long-suffering, rapidly-aging secretary, Carol Ann, in Mommie Dearest. A now-iconic role in the iconically misguided 1981 biopic which contributed significantly (some might say exclusively) to derailing the A-list career of Oscar-winner Faye Dunaway.
Alda’s own nearly 50-year career in films encompasses everything from being Mia Farrow’s stand-in in Rosemary’s Baby (and the voice of Dr. Hill’s answering service in that memorably tense phone booth scene); doubling for Barbra Streisand in Hello, Dolly! (and playing the townsperson dressed in Judy Garland's tassled frock from Meet Me in St. Louis); to co-starring opposite Meryl Streep and Robert De Niro in Michael Cimino’s The Deer Hunter. But unlike Dunaway and almost everyone else associated with Mommie Dearest, Alda is actually happy and proud to have been a part of a film once regarded as one of Hollywood’s biggest embarrassments, now a bonafide camp cult classic. She even accepts (with considerable grace and good humor) the fact that in spite of having more than 50 films to her credit, to a great many individuals she is, and always will be, Carol Ann. 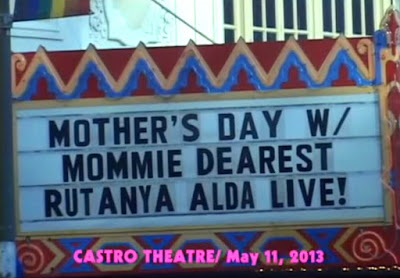 Alda’s current status as the unofficial spokesperson for all things Mommie Dearest began in 2013 when she was the guest of honor at a special Mother’s Day screening at San Francisco’s Castro Theater. There she regaled the SRO audience with hilarious “Lived to tell the tale!” anecdotes about the making of Mommie Dearest: a major serious-minded major motion picture upon which many hopes and investments were pinned, held hostage and kept under siege by the demands and off-the-rails ego of its star.

Conceived as a serious dramatic adaptation of Christina Crawford's 1978 bombshell of a tell-all memoir (Dunaway was certain she'd get an Oscar nomination), Mommie Dearest somehow became a quotable high camp comedy by the time it hit the theaters. Every highly-anticipated film that flops engenders a certain level of curiosity (Mommie Dearest was a critical flop, but made lots of money for Paramount...but for all the wrong reason), but the swift and total reversal of Mommie Dearest's fortunes created a great deal of curiosity among fans as to how so many things could go wrong so extravagantly. Alas, nobody was talking. Considerable blame was placed on the screenplay, but the lion's share of the shame spotlight fell on Faye Dunaway and her fiercely committed, brazenly unsubtle performance.

With Dunaway and the rest of the film's cast and crew reluctant to even acknowledge their participation on the project, details about what went into the making of one of the screen's most delectable disasters has largely been nil.
That is until Carol Ann finally broke her silence.

Culled from the personal diary Alda kept throughout the entire ordeal…I mean, filming of Mommie Dearest, these deliciously dishy stories, related with chummy, “Can we talk?” candor,  were the first behind-the-scenes accounts ever to emerge from beneath the cone of silence that seemed to envelope Mommie Dearest after its critically disastrous release. Needless to say, the audience lapped up every gossipy detail.
As Ms. Alda began making the reading of excerpts from her diary a regular part of her personal appearances celebrating Mommie Dearest, the outpour of interest from fans convinced her to publish them in book form.
Rutanya Alda’s The Mommie Dearest Diary: Carol Ann Tells All was published September 18, 2015 (just a few days shy of the 34th anniversary of the film's Los Angeles release date of September 25, 1981).
Although I was chomping at the bit to read Alda’s memoir hot off the presses, I nevertheless bided my time and had my prayers answered when I received the book for Christmas. By December 26th  I’d finished it. Not because the book is so brief (it’s a slim 166 pages) but because it’s that much fun to read. To use a cliché I’m sure that’s been overworked in every review of The Mommie Dearest Diary to date, but I really couldn’t put it down.
Being a smart woman who knows her audience, Rutanya Alda uses the first third of the book to supply us with only the briefest of personal and professional bio material before getting down to the good stuff. (Biggest personal epiphany: Rutanya Alda is NOT, as I'd always assumed, related to Alan!) Happily, this section proves surprisingly crammed with “good stuff” as well, for once the Latvian-born immigrant embarks on a career as an actress, we’re treated to stories about Alda’s early encounters with the likes of Brian De Palma, Joan Crawford, Robert Altman, Barbra Streisand, and even pre-Mommie Dearest Faye Dunaway. The cumulative effect is the desire for Ms. Alda to later write a more comprehensive autobiography, the span of her career and the many great directors and actors she’s worked with (and slept with) providing a ‘70s enthusiast like me with a vivid glimpse into the New Hollywood as it morphed into blockbutserland

The actual Mommie Dearest diary begins with Alda’s audition for director Frank Perry (Diary of a Mad Housewife, Last Summer) in December of 1980, and ends on the last day of filming, April of 1981. In between, movie fans are given a rare glimpse into the inner workings of the hurry-up-and-wait world of filmmaking, and Mommie Dearest fans at last get to find out if there was anything going on behind the scenes which could possibly explain - or excuse - wound up on the screen.

What we discover is Dunaway's dedication to her work was complete, if myopic. Her understandable but nevertheless all-encompassing self-concern not exactly jibing with the image Hollywood likes to promote of itself (on award shows) as a collaborative community of artists.

For her part, Alda, dealing with a rocky marriage and her husband's drug addiction, struggles to be a team-player on the set. She keeps quiet as the size of her part is systematically whittled down by a star who envisions the film more as a one-woman show, all while under constant pressure (and repeated warnings) to keep making herself plainer and plainer so as not to distract or draw attention away from Dunaway.

Since the diary was never intended for publication and used primarily as a meditative tool while the author sought to navigate both her troubled marriage and the difficult shoot, there’s a take-no-prisoners directness to Alda’s writing that makes The Mommie Dearest Diary something of a quidnunc’s wet dream. Nobody is spared (including Alda herself), and she leaves it to the reader to decide whether a bit of gossip to big or too small…she just reveals everything (which is exactly what one seeks in a tell all, but so seldom ever gets). In addition, she's also very fair-handed. Dunaway is revealed to be quite gracious and accommodating - when she wants to be.

It's a wonderful read for fans of moviemaking in general (the minutia of per diems, soundtstage etiquette and glimpses of LA in the '80s are a treat [Filmex!]), but a truly marvelous companion piece for fans of Mommie Dearest. In fact, the biggest compliment I can bestow upon The Mommie Dearest Diary is that it reads just like the kind of commentary I wish accompanied the DVD. Should yet another special edition DVD be released, perhaps with a few of the many sequences shot and later excised for time, I hope they enlist Rutanya Alda for the commentary. 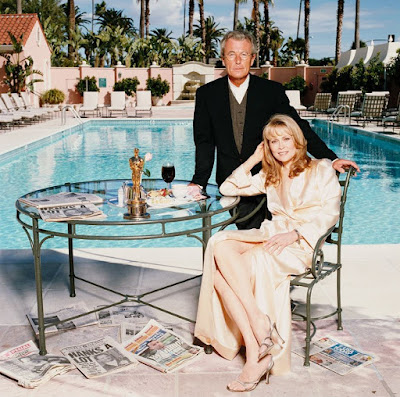 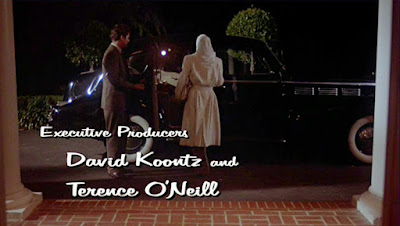 I don't want to spoil anyone's fun by revealing anything more about the book, so here's a glimpse of some of the things you'll find out, some of the questions that will be answered, and a few tips on what to keep a lookout for:

If you pick up The Mommie Dearest Diary: Carol Ann Tells All expecting the kind of dirt to make your hair stand on end, you're likely to be disappointed ( you won't discover anything you don't likely already suspect about La Dunaway, but it's fascinating having it confirmed!).

But if you're like me, a Mommie Dearest fan who has always marveled at the phenomenon of serious-minded films (like Valley of the Dolls, The Oscar) going so grievously astray they transmogrify into something nobody involved could have ever foreseen; then The Mommie Dearest Diary provides some eye-opening insight into the world of high-stakes Hollywood filmmaking.
A world where everybody starts out wanting to do something important, only to wind up compromising, placating egos, cutting corners, and ultimately counting the days waiting for the whole thing to be over. 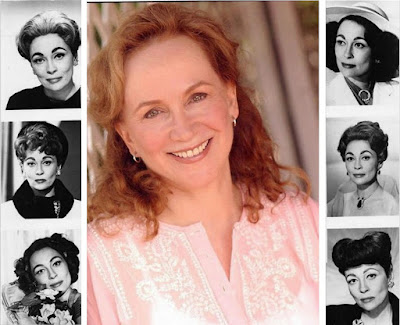