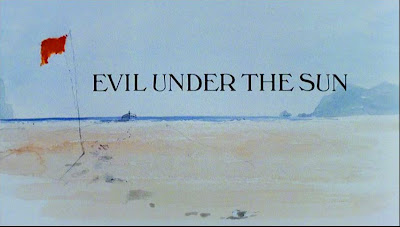 Of the many films adapted from the Hercule Poirot mystery novels of Agatha Christie, I definitely consider 1974s Murder on the Orient Express to be the most elegant, effective, and classiest of the lot (that cast!). But when it comes to which Poirot film distinguishes itself in my memory as the wittiest and the most consistently entertaining, none can hold a magnifying glass to 1982s Evil Under the Sun. Striking the perfect balance between deliberate camp and the appropriate-for-the-period sophisticated light touch of a 1930s Thin Man movie, Evil Under the Sun is an unflaggingly charming little murder mystery whose many gifts (visually, narratively, and dramatically) become even more pronounced with repeat viewings.
A suitably chi-chi tone is set from the start thanks to a credits sequence comprised of Hugh Casson’s stylishly character-based watercolor sketches accompanied by sweepingly lush orchestrated arrangements of Cole Porter standards. It should be noted here that the outstanding musical score (arranged and conducted by John Lanchbery) is very nearly my favorite thing about Evil Under the Sun and practically functions as another character in the proceedings. Happily, the soundtrack album is available on iTunes.


Evil Under the Sun doesn’t deviate from the usual tried-and-true Agatha Christie setup: An assemblage of well-heeled characters with hidden agendas and interwoven alliances finding themselves circumstantially confined to a picturesque locale where a murder has taken place. The cast, budget, locale, and designated sleuth may change (either Hercule Poirot, or Jane Marple), but everything else about the Christie formula is as reliable and religiously adhered-to as the plot of a Beach Party move.
And beach parties are an apt reference, for you see, Evil Under the Sun gives us a Hercule Poirot on holiday. A working holiday in any case, as the eccentrically fastidious detective is dispatched to a tony island resort owned by former courtesan Daphne Castle (Maggie Smith) to investigate a simple insurance fraud that (of course) turns into a puzzling case of whodunit. Gathered this season for fun in the sun is a gaggle of guests, all of whom share an unpleasant past association.
There’s fey columnist Rex Brewster (McDowall); bickering and boorish theatrical producers, Myra and Odell Gardener (Sylvia Miles &James Mason); ill-matched newlyweds Christine and Patrick Redfern (Jane Birkin & Nicholas Clay); disgruntled industrialist Horace Blatt (Colin Blakely); and, most ostentatiously, abrasive Broadway star Arlena Marshall (Diana Rigg) with her new husband (Denis Quilley) and reluctant stepdaughter (Emily Hone) in tow.
While the mystery at hand is puzzling enough, with red herrings more plentiful than pebbles on the beach; the particulars of what follows in Evil Under the Sun are of less consequence than the flair with which they are presented. Screenwriter Anthony Shaffer (Sleuth, The Wicker Man) has fashioned a delightfully witty script of clever wordplay, colorful characters, and ceaseless bitchiness.
Director Guy Hamilton, who I felt seriously botched the 1980 Miss Marple film The Mirror Crack’d, redeems himself rather stupendously with Evil Under the Sun, seizing on every opportunity for highlighting the character-based humor and conflict. His direction displays exactly the sort of zest and deftness of pacing missing from that earlier film. Granted, Hamilton is greatly assisted this time out by a cast of accomplished, largely British actors surrendering themselves to creating distinctly vivid characters while sticking to the genre's demand to remain a tightly blended ensemble piece. 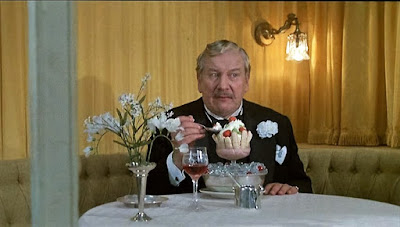 WHAT I LOVE ABOUT THIS FILM
There's something I find very funny in this collection of testy and ill-tempered society folks trying in vain to relax on their vacation. In a way, each is out of their element (none more so than the seasick prone, non-athletic Poirot), and the strain shows in the All About Eve exchanges and edgy interactions.

And if you're going to have a script crammed with catty dialog, you couldn't ask for it to be delivered by better actors than those twin masters of the articulate put-down; Diana Rigg and Maggie Smith.


PERFORMANCES
The cast assembled for Evil Under the Sun is not only one of the strongest of the Agatha Christie series (it's Ustinov's second go-round as Poirot and he pretty much makes the role his own in this outing), but, stylistically speaking, it's wonderful how they all manage to be on the same page and hit the same notes throughout. The cast plays it serious enough to make the drama work, yet succeed in sustaining an air of caricature and cocktail party flippancy that is so deliciously amusing and makes Evil Under the Sun a delight from start to finish.
Years before I became a Downton Abbey addict, I've worshiped at the altar of Maggie Smith; an actress who has always had a singular way of getting words to do her personal bidding. That she is so good is no surprise; that she upstages even the well-cured hamminess of Ustinov is miraculous. Bad girls are always good fun, and the ever-classy Diana Rigg sinks her teeth into her über-bitch role with assurance.

I was taken by surprise by how much Sylvia Miles made me laugh. Giving an unsubtle performance to say the least, Miles is nevertheless perfectly cast as the Ugly American in a film loaded with Brits (Lauren Bacall served the same function in Murder on the Orient Express). And the pairing of this vulgarian with the genteel and distinguished James Mason is really inspired. Their scenes together smack of an urbane George an Martha, or perhaps they give a glimpse of what Lolita's Humbert Humbert's life might have been had Charlott Haze not had that nasty accident.
The happiest, biggest surprise for me is Roddy McDowall. An actor who has literally given the same one-note, non-performance in film after film for years, at last decides to create a distinguishable character, and he's marvelous. His Rex Brewster has the attitude of Rex Reed, the body language of Noel Coward, and the voice of Tallulah Bankhead. It's as if after all those years in the closet, McDowall could only let loose by playing an openly gay character in a film. He's the best I've ever seen him. 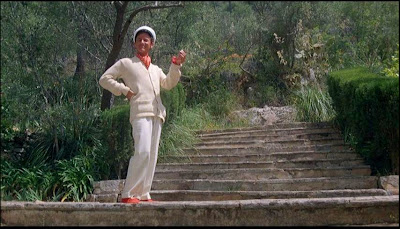 THE STUFF OF FANTASY
As a movie fan who's also a fan of the male physique, I can't tell you how weary I've grown of the decades-long tradition of mainstream films always representing the heterosexual male gaze. It's a given that if a camera is going to focus on a comely face, appealing chest, desirable derriere, or long leg; those body parts will belong to a woman, and the surrogate eye of the camera, that of the male. Let's go back to the Beach Party reference made earlier. Here's an entire genre of film that never missed an opportunity to train a camera lens on a wiggling female butt or heaving bikini top, yet never considered that there were those in the audience (women, gays, guys OK with their masculinity) who might want a close-up of Frankie Avalon's behind for a change. No such luck. The heterosexual male gaze was all that counted.
When one happens to come across that rare film that keeps its female stars clothed and trades the cheesecake for beefcake, attention must be paid. My hat is off to Evil Under the Sun for providing so much memorable footage of the handsome physique of actor Nicholas Clay (a fave since Excalibur) in nothing but a barely-there swimsuit. I've seen Evil Under the Sun at least 10 times over the years. Five of those times I'm afraid were strictly so as to take another look at Nicolas Clay's ample derriere. Vive la différence! 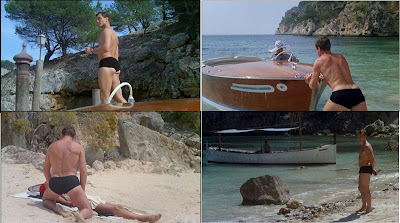 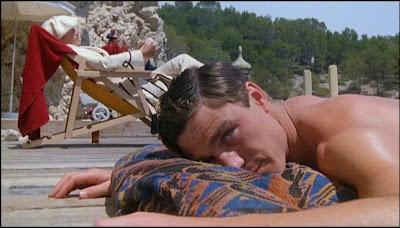 There's no way to talk about Evil Under the Sun without making mention of the wryly outrageous costumes by Anthony Powell (101 Dalmatians), the only man who can design clothes with a punch line. Seemingly taking his inspiration from a Wonder Bread wrapper, Powell's whimsical creations are the physical embodiment of the arch wit and self-aware humor of the film. 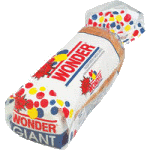 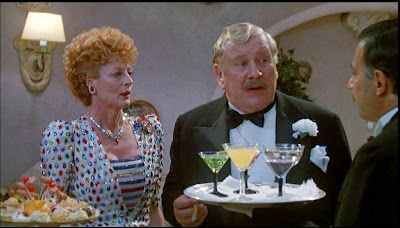 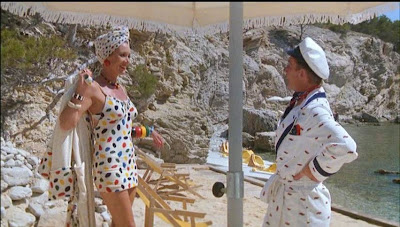 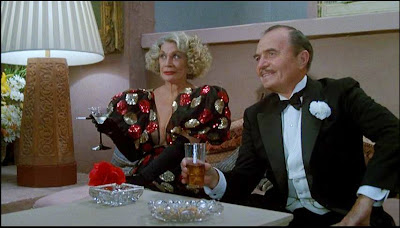 I first saw Evil Under the Sun at a theater when it opened in 1982. During certain scenes the audience laughed so loud and long that you couldn't hear the dialog for long stretches. I thought the film was going to be a big hit, but it's seldom spoken of today and only rarely shows up on cable TV. As I said, it remains my favorite of the Agatha Christie films and is definitely worth discovering if you've never had the pleasure. Certainly if only to see a pre-Downton Abbey Maggie Smith continuing to lay waste to the unwary.

The late actor Nicholas Clay is not very well-known, but apparently very well-liked:
Random Ramblings,Thoughts & Fiction has a great Nicholas Clay post HERE
Another good post on Nicholas Clay can be found at Poseidon's Underworld HERE