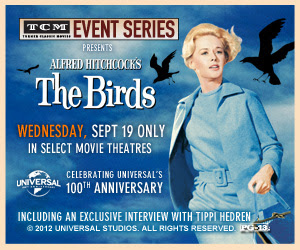 Earlier this month I wrote about my enduring fondness for what many consider to be Alfred Hitchcock's final masterpiece, The Birds (link to post HERE); a post reliant on memory, cable TV, and rewatching my 2000 DVD. But thanks to fellow blogger The Lady Eve's Reel Life and the kind folks at NCM Fathom Events, I was lucky enough to be given tickets to see the TCM one-night-only theatrical screening of the newly restored version of The Birds last night in Century City here in Los Angeles.


What a terrifically fun evening! Not only did it provide me and my partner a much-needed, mid-week date night (and, lucky me, he likes to hold hands in the movies and lets me dig my nails in his arm during the scary parts), but when they said they’d be presenting a digitally restored version of The Birds, they weren’t kidding around. The nearly 50-year-old film has never looked or sounded better. I know nothing of digital technology, but what’s been done to The Birds is akin to the burnishing of a gem. What was already great about it is better (the color and clarity of the images is almost breathtaking; the innovative electronic soundtrack more bone-rattling than ever) and what was once flawed now seems smoothed over to a high gloss (the crude edges and dodgy color-balance of 60s-era matte work and rear-projection looks to have been diminished). 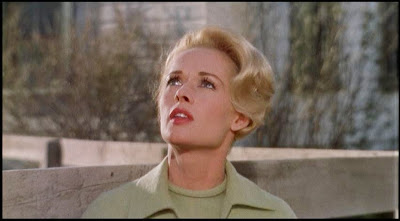 Plus there was the added bonus of a pre-taped interview with star Tippi Hedren by Turner Classic Movie host Robert Osborne, along with footage of interviews with Suzanne Pleshette and Rod Taylor from past TCM productions. For the die-hard Birds fan, not much new is revealed in these brief interviews, and the tone of Hedren’s segment is decidedly more polite than what has since come to light about her relationship with Hitchcock; but there’s always at least one tid-bit to add to the lore, and I do get a kick out of Pleshette’s down-to-earth frankness, Taylor’s spot-on Hitchcock impersonation, and Hedren’s enduring class.

As for the screening itself? Just spectacular. I had such a ball seeing such a familiar film in an environment and under circumstances that made me feel like I was seeing it for the first time. All of us in the audience (many of whom, based on reactions, must have been seeing The Birds for the first time) just seemed to get caught up in the action. There wasn't any of that sort of palpable restlessness you can feel in an audience when a movie lags. I think I was the only one who even got up to use the restroom in the whole two hours (a "large" drink, I forgot, is roughly a gallon at the movies). If I noticed anything at all, it's that this wan't a particularly 'camp" crowd. Hardly any unintentional laughs were to be heard the whole night. These were devotees and I can scarcely remember being among a more rapt audience. 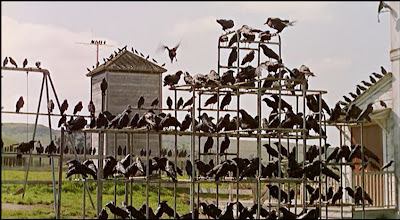 The first time I ever saw The Birds at a theater was perhaps over 15 years ago, and then that was with a scratchy print that jumped during the schoolhouse bird attack, leaving a gray-bearded old gentleman in front of me so weepily disconsolate his partner literally had to pat his back to calm him down.

Seeing The Birds last night was something else again. It solidified for me the film's complete evolution from guilty-pleasure to revered classic. As the ageless Tippi Hedren says, "The Birds has a life of its own."