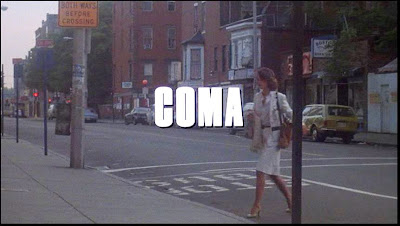 Like counting the rings of a tree, there will likely come a day when a person’s age can be calculated by the number of films released in that individual’s lifetime that have fallen prey to the dreaded remake. Of course, such calculations would be mathematically calibrated to allow for the increased percentage numbers afforded genre films (Carrie, The Shining, The Stepford Wives, Psycho, et.al,) obviously Hollywood’s favored source for idea-harvesting.

Coma, one of my favorite '70s thrillers, has recently been given the TV miniseries treatment. And while I wish it luck (ever the bullheaded traditionalist, I didn’t watch it and don’t plan to), seriously…can any remake ever hope to replicate in any dramatically meaningful way, that transcendent feminist moment in American cinema when heroine Geneviève Bujold doffed her wedged espadrilles and pantyhose before crawling through the bowels of Boston Memorial Hospital in search of the cause of all those suspicious coma cases? After years of women in thrillers and horror films falling victim to their feminine finery (running in heels and twisting an ankle being the genre standard) this small act of practicality was such a revolutionary repudiation of a sexist genre cliché that on the opening day of Coma back in 1978, the audience I saw it with actually broke into applause!
The plot of Coma, like many a good thriller, is marvelously simple: at prestigious Boston Memorial Hospital a higher-than-normal percentage of routine surgery patients are ending up in irreparable comas. Resident surgeon Dr. Susan Wheeler (Bujold) grows suspicious after her best friend and a recently admitted healthy male patient both slip into comas following relatively simple surgeries, yet no one at the hospital seems to share her concern. What follows is a paranoid suspense thriller that plays on our basic fears of hospitals and our vulnerability in the face of a sometimes callously impersonal medical profession.

The post-Watergate years may have been depressing as hell, but all that resultant disillusionment and cynicism was a bonanza for the suspense thriller genre. The pervading sense of skepticism and uncertainty that was the cultural by-product of such a large-scale political betrayal fueled and found catharsis in a great many fascinating films of the '70s. We had thrillers about conspiracy theories  –  The Parallax View (1974); morally confused private eyes – Night Moves (1975); and personal privacy paranoia  – The Conversation (1974). Coma remains one of my personal favorites because it ratchets up the tension of the conspiracy theory thriller by combining it with the combative feminist-era sexual politics of The Stepford Wives.

WHAT I LOVE ABOUT THIS FILM
Rosemary’s Baby, The Stepford Wives, and Klute rank high on my list of unforgettable thrillers because each is a genre film (horror film, suspense thriller, crime mystery) that seizes upon an element of the cultural zeitgeist to create something marvelously new and chilling out the rote and familiar. The medical thriller at the center of Coma is intriguing enough (are patients deliberately being put into comas, and if so, why?), but the paranoia is amplified by having the usual disbelieved protagonist be a woman doctor in the male-dominated field of medicine.

The day-to-day condescension Geneviève Bujold’s Dr. Wheeler faces from her male co-workers takes on an increasingly ominous air when her growing anxiety and rational concern that something nefarious is afoot at Boston Memorial is met with “Don’t bother your pretty little head about it” disregard from her superiors. Especially the creepily paternal Chief of Surgery (Richard Widmark) who treats a serious professional discussion with Dr. Wheeler as if he's Andy Hardy's father asked to give a heart-to-heart.

It’s established early on in the scenes between Dr. Wheeler and her professionally ambitious boyfriend, Dr. Mark Bellows (Douglas) that she is hypersensitive to issues of respect and acts of subtle sexism - a perfectly natural response to working daily in the semi-hostile, all-male environment of professional medicine (the in-hospital dialogue is full of men making casually demeaning comments to or about women), all the while simultaneously trying to navigate a personal relationship (Douglas to Bujold: “You don’t want a lover, you want a goddam wife!”).

Much like Rosemary’s pregnancy was targeted as being the source of paranoia about her neighbors in Rosemary's Baby; Dr. Wheeler’s feminism and relationship troubles are viewed as being part of her percieved-as-hysterical suspicions about the male staff at her hospital. As her frustration mounts from not being able to convince anyone at the hospital that there is something to be concerned about, reactions from the male staff (she seems to be the only female doctor there) range from flat out dismissals to bristling at the audacity of a woman daring to challenge the knowledge and authority of men. It's a wonderful add-on device that lends to Coma a subtext that fuels paranoia with extra layers of frustration that comes from not being taken seriously.

PERFORMANCES
I had the grave misfortune of having my first-ever exposure to Geneviève Bujold occur with the movie Earthquake (1975); a film whose most terrifying image was that of the lovely French-Canadian actress canoodling with the Skeletor-like countenance of Charlton Heston. In the ensuing years I’ve enjoyed her performances in many wonderful films (1988's Dead Ringers is a must-see), but I guess I have a special place in my heart for Coma. As her first real starring solo venture, I thought it was to be the film that launched her to stardom. As I’ve said in a previous post, Bujold represented to me the direction I thought films were going to take in terms of motion picture leading ladies in the '70s. She was quirky, radiated intelligence, and embodied a non-traditional beauty coupled with remarkable acting skill. As the '80s fate of Debra Winger attested, Hollywood still preferred their leading ladies vapid and pliable, so the promise of Bujold was never realized (at least to my satisfaction).

Still, Bujold is terrific here, spunky and sharp with that great throaty voice of hers and those dark, inquisitive eyes. She adds so much dimension to her role that she keeps character and motivation at the forefront, preventing Coma from becoming mired in its medical thriller plot. Unlike the kind of actress usually cast in roles like this (I call your attention to Lesley-Anne Downs’ implausible Egyptologist in Sphinx, another film based on a Robin Cook novel) Bujold is actually believable as a physician.

THE STUFF OF FANTASY
Unable to convince anyone of her suspicions, Dr. Wheeler's quest takes her to the architecturally severe and foreboding Jefferson Institute. The scenes taking place at this futuristic chronic care facility (whose actual purpose I won't reveal here) are Coma's big set-pieces, and they really don't disappoint. A concrete and steel variation on the typical thriller haunted house, the Jefferson Institute scenes are notable not only for the poetic-nightmare images of roomfuls of bodies suspended in techno limbo, but also for the unforgettably bizarre performance of Elizabeth Ashley as Mrs. Emerson, the Institute's equivalent of a gargoyle at the gate. By Coma's midpoint, when everything is just about sunk by an interminable "romantic weekend" montage, Ms. Ashley appears and boots the film back into high gear. Her introductory scene with Bujold is a classic! As the unblinking and inscrutable head of the Institute, Ashley carves an indelible impression and is one of my favorite characters in the film.
THE STUFF OF DREAMS:
No matter how clever the plot, a suspense thriller has to have thrills. Coma mines the already fertile creep-out atmosphere of hospitals for all its worth. It does so by allowing us to witness (to great effect, I might say) the day-to-day casualness doctors, nurses, and anesthesiologists treat that which is unnervingly life-and-death and terrifying to us. If there is a level at which Coma scores its biggest points as a thriller, its in giving the audience the impression that hospitals regard us patients as a mechanic would a car on a lift; just a bunch of billable parts that can or cannot be fixed.

And then of course, Coma has plenty of the good, old-fashioned kind of thrills too. 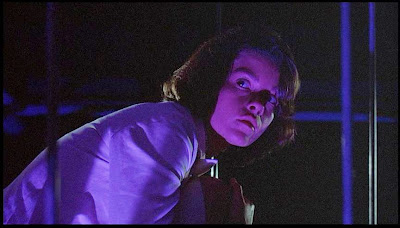 Remakes get a bad rap, but for every totally pointless rehash of a classic (Straw Dogs) there is a film like 1978s marvelous Invasion of the Body Snatchers, a retread that's really a re-imagining. I'm not sure what the remake of Coma will seize upon as a justification for its existence (the feminist subtext - which to my way of thinking is more relevant than ever - might be perceived as being dated), but unless it devotes itself to correcting some of this film's flaws (a few loose narrative threads, that mysterious hired killer), I think I'll stick to this imperfect but ever-so-satisfying relic from a time when even genre films felt that it was important to comment on the world we live in. 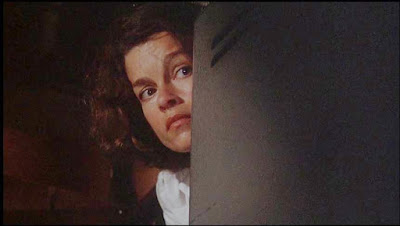 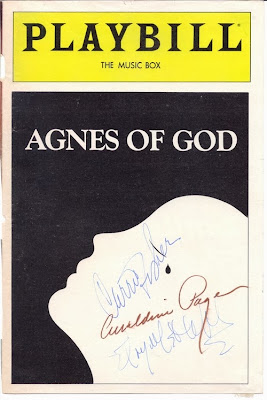 In 1982 I had the opportunity to see Elizabeth Ashley co-star on Broadway with Geraldine Page and Carrie Fisher in the play,  Agnes of God. As one might imagine, the exxperience was electrifying. Although very faded, Ashley's signature is on the bottom of the Playbill above.

To read more about Coma:
Another informative and fun post on "Coma" at Poseidon's Underworld
There's a great post about the "Coma" DVD here at Joe's View