SETTLE FOR THE DREAM: SONDHEIM IN THE MOVIES

Countless obituaries, tributes, eulogies, and “In Memoriam” articles reiterated the indisputable fact that the death of Broadway legend Stephen Sondheim signaled the end of an era in American Musical Theater. And indeed, the breadth of his impact is difficult to overstate. Stephen Sondheim almost single-handedly changed the look, sound, and content of the American musical. Transforming the popular medium that once strove for nothing deeper than “pleasing the tired business man” (i.e., to amuse and entertain, not instruct or strain the brain) into a sophisticated and challenging art form illuminating complex societal themes and exploring the darker corners of the human condition. It’s impossible to imagine the likes of his particular genius will never be seen again.
But to me…a gay man who discovered the brilliant composer-lyricist during my floundering adolescence in the Sexual Revolution/Gay Liberation ‘70s, it’s hard not to see the obvious tragedy of Stephen Sondheim’s death at age 91 as largely representing a form of triumph. A triumph of survival, a triumph of the indomitability of the creative voice, and certainly a triumph of a queer artist's personal journey (from the closet to "Marry Me a Little") over the course of his nearly 70-year career.
For what’s not triumphant in being a gay man surviving the devastation of the AIDS plague of the ‘80s and living to such a ripe old age? It’s certainly a triumph that the trajectory of Sondheim’s long career dramatizes the struggle of the American LGBTQ experience: Sondheim’s first Broadway show (1957s West Side Story) was the creation of no less than FOUR societally-mandated closeted gay and bisexual men. By the time of his death, Sondheim was an out-and-proud, world-renowned public figure legally wed to his husband of four years.
As one of Broadway’s most lauded composer-lyricists (8 Tony Award wins - including an Honorary Lifetime Achievement in Theater Award, 8 Grammys, a Pulitzer Prize, a Presidential Medal of Freedom, and more) Hollywood beckoned Sondheim from the start. And of his 18 theatrical productions, six have made it to the screen to date. The work he created specifically for the movies includes composing a score for French director Alain Resnais, writing original songs for several feature films (one even garnering him an Oscar win), and collaborating on the screenplay of a murder mystery with his friend and rumored lover Anthony Perkins.
The relative or comparative success/failure of Hollywood’s adaptations of Sondheim’s work has sparked much unnecessary debate, with Sondheim himself coming off as the ultimate winner by understanding the differences between film and theater and therefore being considerably less bent out of shape by the compromises of adaptation than his acolytes.
I think the reason for this can be found in the work itself.
One of the more consistent themes running through Sondheim's work is that while idealism is both an elemental and essential part of being an artist, lover, fairy tale character, dreamer, suburban married couple, and even a sociopathic killer; perfection itself is something unattainable. There is no such thing as ‘happily ever after’ where those immensely complicated and inherently flawed things called human beings are involved.
So many of his musicals end with characters thinking they are “settling” for the less-than-perfect, when the overarching theme stresses that once one abandons illusion and fantasy (which makes us question whether we're happy "enough" or if our happiness is the "right kind") it opens us up to recognizing the often very real happiness that already exists in our lives in the only place it can ever truly be: in the here and now, wherever that is and whatever that may look like. Accepting who we are, what we have, and finding contentment in it, imperfections and all.

“Feed the plot to the fish. Life is not what the movies make it seem. Still, we got Dorothy Gish. We can lean back and settle for the dream.” 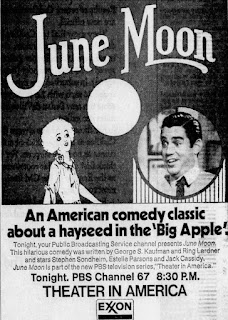 Stephen Sondheim made his acting debut in the Oscar Levant-esque role of songwriter Maxie Schwartz in the 1974 TV adaptation of George F. Kaufman's 1929 comedy June Moon. The entire telecast is available for viewing on YouTube or as part of the Great Performances DVD collection. 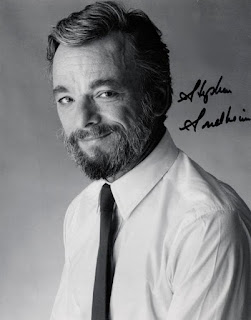