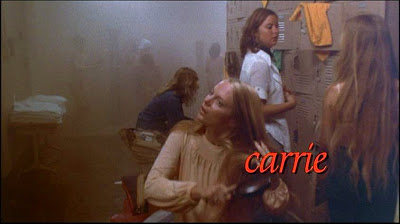 Joan Rivers: "I wasn't invited to the prom. I invited the guy and I had to buy my own orchid. Carrie had a better time at her prom than I did."

That Carrie can be referenced in the punchline of a joke without benefit of clarification is a testament to how deeply rooted in our cultural consciousness Brian De Palma’s 1976 film (vis à vis Stephen King’s 1974 novel) has become. Indeed, contrary to the circumstances of her character in the film (she’s such a non-entity at her school that the principal repeatedly misidentifies her as “Cassie”) and the teaser ads for the forthcoming sequel (You Will Know Her Name); I'd say that by now, everybody knows exactly who Carrie is.
I was just starting college the year Carrie was released and (cinema snob that I was) I really couldn't have been less interested in it. 1976 was an absolutely amazing year for movies, and the films that preoccupied my mind, my time, and my interest were the more high-profile releases: Taxi Driver, The Man Who Fell to Earth, Hitchcock’s Family Plot, Fellini’s Casanova, Marathon Man, Rocky, King Kong, A Star is Born, Polanski’s The Tenant, Network, The Last Tycoon, Burnt Offerings, Sparkle, Lipstick, Logan’s Run, Bertolucci’s 1900, Altman’s Buffalo Bill and the Indians, and Bergman’s Face to Face. I hardly saw daylight the entire year! 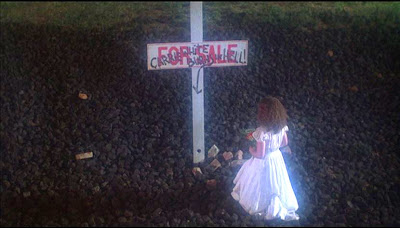 And then there was the woefully under-hyped Carrie. Here we had a film by a director whose only other work I’d seen at the time -Phantom of the Paradise - I remembered primarily for Paul Williams' music, and whose sole marketable cast member, John Travolta, was a fledgling teen idol from the execrable sitcom Welcome Back, Kotter (his whispery pop single, “Let Her In,” had turned the summer of ’76 radio-listening into an absolute nightmare for me). Everything about Carrie, from its no-name cast to its over-explicit poster art, gave me the impression it was strictly drive-in fare; a movie suitable for a double-bill with one of those low-budget releases from AIP or Crown International about Bigfoot or small town redneck serial killers.

It was only through the persistent badgering of my best friend that I even came to see Carrie at all. My friend, a sci-fi / Dark Shadows buff, had already seen Carrie and used the excuse of wanting to see it again as an opportunity to call in his marker for the time I’d pestered him into attending a screening of Barbarella with me. As I took my seat in the packed San Francisco movie theater where Carrie was playing, I seethed with resentment over what I perceived as my friend extracting a particularly mean-spirited payback for what, the heinous crime of exposing him to the sight of a naked, zero-gravity Jane Fonda? However, some 98 minutes later I emerged from the theater, red-eyed (from crying- that Sissy Spacek really gets  to me in this movie...even today) and overwhelmed. Wow! I had NOT been expecting that!
Anticipating at best a run-of-the-mill horror movie, what I got was a surprisingly sensitive character drama that morphed into a kind of a nightmarish Grimm's fairy tale. A blood-splattered religious allegory of sin and redemption that's a near-poetic parable on the inability of a legacy of pain and cruelty to beget anything other than more pain and cruelty. Just out of high school myself (an all-boys Catholic School, but let’s face it, high school is high school) it felt more than a little cathartic to see a film that depicted everyday schoolyard torments with the graveness of Greek tragedy, meeting out suitably catastrophic retribution to the guilty.

I was sold by Carrie’s first five minutes (the volleyball game and the gym shower), both of which established: a) the atypical horror film setting of a high school; b) the female-centric thrust of the story, wherein the concerns, actions, and motivations of the women in the film appeared essential to propelling the plot forward; and c) the obvious subjective perspective the film was going to take regarding Carrie herself. Carrie absolutely floored me. I saw it three more times that month, and it has since remained one of my all-time favorite movies. A motion picture I’d readily list among the best horror films ever made.
WHAT I LOVE ABOUT THIS FILM
Given that adolescence was a living hell for the vast majority of us, there’s something conceptually ingenious about a horror film set in an American high school—a “house” as haunted by the ghosts of the tortured and suffering as any European Gothic mansion. The hierarchy of school cliques and the day-to-day cruelties teens inflict upon one another seem to me perfect subjects for a meditation on the banality of evil; a concept explored in many of the films that have proved most influential in the horror genre (Rosemary’s Baby, The Stepford Wives, Invasion of the Body Snatchers).

Unlike Stephen King’s novel, which expands the scope of Carrie to include news and science investigations into what happened at the prom, De Palma’s film wisely maintains a much narrower subjective focus (few things happen outside of the scope of the high-schoolers), heightening our identification with and empathy for Carrie and her rather tragic existence. I’m reminded of a review of Carrie which made the sharply observation that it was so fitting for Carrie to have only destroyed her high school in the film (as opposed to half the town in the novel); because to an adolescent, high school IS the world to a teenager. I honestly think the intimate scale of De Palma's Carrie is what makes it work so well. Carrie's nightmare is merely every adolescent's anxieties (public humiliation, social ostracism, the desire to fit in) writ in blood.
PERFORMANCES
Defying accepted Hollywood logic that holds horror films don’t get Academy respect, the two (and only) Oscar nominations afforded Carrie were for the impossible-to-ignore performances of Sissy Spacek and Piper Laurie. Taking wildly divergent acting paths—Spacek playing her keyed-up naturalism off of Laurie’s idiosyncratic stylization—the actresses share a symbiotic chemistry in their scenes together that elevate Carrie far above what is usually considered possible in a horror film. (Never cut any slack to anyone who tries to get a poorly made horror film off the hook with the excuse, "Nobody goes to horror films for the acting. They just want to be scared!" - we don't always luck out, but good acting in horror films count.)
Spacek's Carrie doesn't amp up the cliche acting signals that would indicate an outcast character. Rather, Carrie's awkwardness appears to emanate not out of any innate strangeness (she's actually better adjusted than most of her peers) but out of perhaps an overabundance of feelings and an inadequacy of emotional outlets. Carrie's slowly developing telekinesis is a perfect metaphorical representation of what happens when rage is repressed.
And Piper Laurie...I can't say enough about the amazing risks she takes with her role and actually makes them work! It seems as if by grounding her character in a reality deeply felt and understood by her mentally unstable character, she allows herself to inhabit this monster of a woman and prevents herself from regulating any part of her performance by external "sane" standards. Laurie makes me believe in this broadly-drawn woman, and, more miraculously, she terrifies me even when she's making me laugh at her (as Ruth Gordon did in Rosemary's Baby).

The trademark Brian De Palma bag of tricks (slow motion, swirling camera, split screen, complex tracking shots, subjective sound, Bernard Herrmann-esque scores, Pino Donaggio's sensual music used as violence counterpoint, copious bloodletting) have never been put to as effective use as in Carrie. And no sequence in Carrie better illustrates the seamless blending of visual style with narrative theme than the bravura prom sequence. One of the most amazing bits of film as storytelling as you're ever likely to see.
A tour de force sequence that conveys tenderness, romance, joy, pathos, suspense, and terror in a seamless flow that's close to operatic. Like my favorite scene from Hitchcock's The Birds (the Tides Restaurant bird attack) the climatic prom at Bates High School is a sequence I never cease to marvel at, no matter how often I see it. 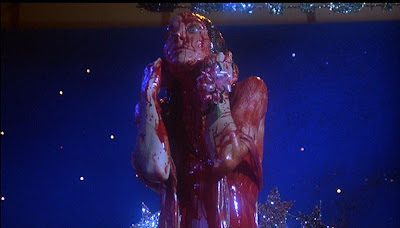 Contemporary filmmakers (especially those enamored of the excesses tolerated by the horror genre) who strive to blow us away with empty violent spectacle and CGI nonsense can take a lesson from De Palma here. If this sequence were all about the destruction and blood, Carrie would have gone the way of obscurity long ago. Carrie endures as a horror classic because De Palma takes the time to bring us into Carrie's dream come true before he turns it into a nightmare.


THE STUFF OF DREAMS NIGHTMARES
In speaking of Rosemary's Baby, director Roman Polanski is fond of saying that his intent was to make a horror film that looks like a Doris Day movie, but reveals itself to be something dark and sinister. To me, Carrie works in much the same fashion: it starts out like one of those teen-empowering After School Specials (a series of TV movies targeted to adolescents in the '70s and '80s) and then throws us a nasty curve as the heretofore reassuring ugly-duckling wish-fulfillment fantasy turns into a nightmare. It's brilliant.
I wish the 2013 remake a lot of luck, but just as Mia Farrow is and always will be the one and only Rosemary Woodhouse; Sissy Spacek's touchingly raw performance assures that there can only be, and only ever will be, one true Carrie.
2013 ADDENDUM:
Saw Kimberly Peirce's Carrie remake. I found it forgettable and unnecessary, albeit better acted than I expected. The big prom scene finale trades De Palm's poetically nightmarish spectacle for protracted explicitness. It's well-done, if artless; the deeply felt tragedy of the first film being replaced by the ghoulishly cathartic pleasure of seeing the guilty parties punished. De Palma's Carrie has haunted me for a lifetime. I struggled to remember the details of Carrie 2013 a week after seeing it.