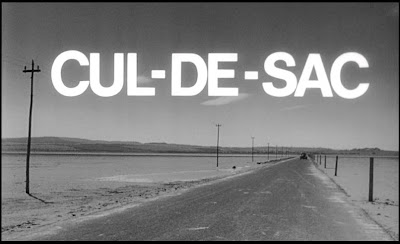 Ask me the name of my absolute, #1 all-time favorite film director and I’ll say Roman Polanski without hesitation or equivocation. From the time I was old enough to know what a director was, Polanski has always been a filmmaker whose work I both related to and respected. In the trifecta of most-admired directors that form my own personal, sub-Freudian model of personality and attraction: Ken Russell speaks most eloquently to my passionate, sensual tastes; Robert Altman I love for the absurd humor he finds in the human condition; and Polanski, more than any director I've ever I known, gives voice and vision to those subtle nightmares that hide out in the darker corners of my psyche. The ones so scary that you either have to laugh or scream.
Cul-de-Sac, his 3rd feature film and a true artifact of the - “Now what was that all about?” - era of college campus cinema of the '60s, is Polanski at his quirky best. And while it's a masterfully shot confirmation of Polanski’s skill as a visual storyteller, actually describing just what kind of film Cul-de-Sac is is another matter. Take one of those gangster-takes-strangers-hostage American noir thrillers like The Petrified Forest (1936), He Ran All the Way (1951), or The Desperate Hours (1955); cross it with a French nouvelle vague art film about marital discord and the inability to communicate, à la Jean Luc Godard’s Contempt (1963); then top it off with a dose of Theater of the Absurd tragicomedy (the film’s original title, When Katelbach Comes, being an obvious homage to Samuel Becket’s Waiting for Godot, and a less obvious borrowing of the name of an actor from one of Polanski’s early short films) - and you have some idea of what Cul-de-Sac is. Or isn't.

In 1966 neither audiences nor critics were particularly responsive to trying to sort the whole thing out, so Cul-de-Sac’s subsequent failure at the boxoffice threatened to sink Polanski's newfound reputation as quickly as Knife in the Water (1962) and Repulsion (1965) had established it. But in the famous words of John Huston’s Noah Cross in Polanski’s 1974 masterpiece Chinatown: “Politicians, old buildings and whores all get respectable if they last long enough.” And indeed, Cul-de-Sac has enjoyed a major revival over the years. Embraced by fans and Polanski himself as one of his best and most cinematic films, it's hailed by contemporary film enthusiasts for many of the the very things it was reviled for back in the day.
Dickie and Albie, gangsters wounded during a botched “job” of an undisclosed nature, take refuge at the secluded retreat of retired businessman George, and his much younger wife, Teresa. Seeking nothing but a place to hide while awaiting rescue by the mysterious, Mr. Katelbach, the fugitive pair hold the newlyweds hostage, setting off a bizarre chain of power struggles, game-playing, and revelatory disclosures which ultimately lead each character to their personal cul-de-sac.

The brainchild of Roman Polanski and longtime collaborator Gerard Brach (The Tenant, The Fearless Vampire Killers, Tess, Frantic) Cul-de-Sac represents the specific cinematic aesthetics, sensibilities, and humor of the pair. “When we were writing this script, we simply wanted to create a movie that would reflect our taste in cinema,” said Polanski to biographer, Denis Meikle, stressing a point difficult to contest. Similar in tone to many of Polanski’s short films, Cul-de-Sac has the look and feel of an extremely accomplished film-school thesis project and is the nearest Polanski has come to making the kind of '60s New Wave art film he spent a large part of his early career ideologically distancing himself from.

One of the biggest thrills to be had in watching Cul-de-Sac is to once again see a motion picture that demands attentiveness. The economics of filmmaking today (to be profitable, movies have to appeal to as broad a demographic as possible) has resulted in an uptrend in cinematic obviousness. Movies today can’t afford to be misunderstood. Everything is spelled-out, underlined, and explained with such pedantic literalness, a kind of passive, dull-wittedness has replaced active engagement on the part of the moviegoing experience.
(An irksome side effect of this distrust of ambiguity can be seen on Internet movie sites like IMDB. The comment sections of these sites, meant to promote discussion, have been taken over by a combative fanboy/fangirl mentality and  a zero-tolerance for differences of opinion, conflicting points of view, or multiple-interpretations when it comes to sacred cows…I mean favorite films.)

Movies that explain every detail do audiences no great service. In fact, I think they rob viewers of a marvelous opportunity to “experience” a film instead of merely trying to “understand” it or figure it out. Cul-de-Sac is a textbook case on how a film can be entertaining, suspenseful, touching, dramatic, and tragic (and at the same time entirely coherent) and still leave considerable aspects of the plot open to individual interpretation.


Things left vague or unexplained in Cul-de-Sac:
George and Teresa’s relationship.
The circumstances behind the dissolution of George’s first marriage to the unseen Agnes.
Why the couple chose to live in such a remote location.
The particulars of what actually brings Dickie and Albie to the castle for shelter.
The interrelationships of the uninvited guests (specifically Jacqueline and Cecil).
The motivation behind almost all of Teresa’s actions.
Katelbach himself.
Confining oneself exclusively to what is disclosed in the film, Cul-de-Sac supports myriad interpretations. And therein lies both its genius and its fun. It’s a film people can talk about afterward, sharing impressions and comparing notes. No two individuals are likely to see Cul-de-Sac in exactly the same way. And beware the literal-minded who insist on one "correct" understanding of the film. These are the kind of folks who can't tell you what they feel about a painting until they've read the museum card.

Anyone familiar with Donald Pleasence’s somnambulistic performances in the Halloween horror film franchise will be properly thunderstruck by what an expressive and animated actor he can be in the right role. With his shaved head a burlesque of the hundreds of eggs on display throughout the film (the shaved head was Pleasence's idea and came as a big surprise to control-freak Polanski). Pleasence is all repressed agitation and pent-up passion. His unfocused feverishness (he never quite knows where to channel it, and when he does, it comes out all wrong) is met in equal doses by the icy assurance of Francoise Dorleac. Playing a paradoxical female with plenty of yin and yang to spare, Dorleac is the impulsive catalyst in this combustible mix of characters. Some critics have decried what they see as yet another misogynist Polanski fantasy in the character of Teresa, but I found it interesting that she is portrayed as not only fearless, but also the strongest and most resourceful character in the film. Self-servingly so, perhaps, but better that than one of those helpless, always in need of rescue types that proliferated in movies throughout the '60s and '70s.

Blacklisted veteran actor Lionel Stander, all gravel-voiced and possessed of old-Hollywood bearing, is an inspired choice for a film that derives a great deal of its tension (and absurdist comedy) from the oil/vinegar chemistry of its characters. He’s like a gangster from an old Warner Bros. movie who somehow got himself teleported into a '60s art film. There's a comical lack of complexity to this man (although there's a lovely moment when he's shown gently looking over the belongings of his friend) as he struggles to get his neurotic hostages to just shut up and do what he says.

THE STUFF OF FANTASY
A terrific storyteller with a taste for the idiosyncratic, Polanski is unsurpassed in mining the tension and gallows humor to be found in disparate characters forced into interaction under claustrophobic circumstances. As he does explicitly in Carnage, Death and the Maiden, Bitter Moon, and Knife in the Water, and more subtly in Rosemary’s Baby, The Tenant, and Frantic; Polanski likes to have fun with the idea that anybody actually knows anything about anyone—least of all themselves.

THE STUFF OF DREAMS
By all accounts an extremely difficult and unpleasant film to make, Cul-de-Sac was nevertheless a labor of love for Polanski, and that fact, above all, really shines through when watching it. Even without it confirmed (as it is in the Criterion Collection DVD interview with Polanski) one can sense from Cul-de-Sac that it is a film made with little thought given towards commercial concerns, and all energies trained on making the kind of film that inspired Polanski to want to be a filmmaker in the first place. It's a story about character and consequence told almost entirely through image and atmosphere. Pure cinema, as Polanski would call it. 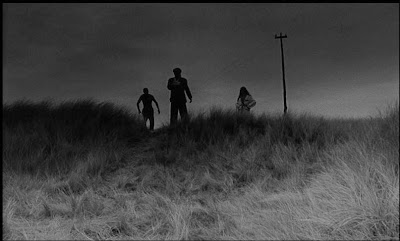 Superficially speaking, Cul-de-Sac is just one spectacular-looking film. Every exquisitely-composed shot bears the stamp of having been labored over and lit to perfection. But it's also a marvelously layered film of the sort that keeps feeding you more information the more you see it. It's in this realm that Polanski's legendarily persnickety nature and eye for detail pays huge dividends, providing a rewarding cinema experience of the kind that grows increasingly rare. For fans of Roman Polanski, Cul-de-Sac is a must-see. What am I saying? It's a must-see for anyone who loves film! 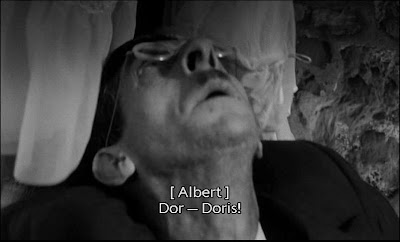 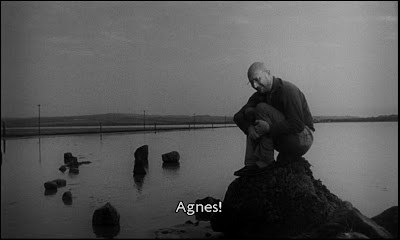