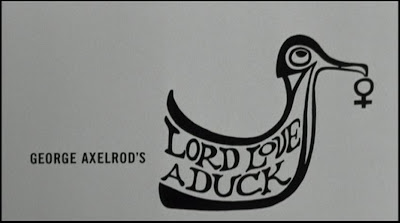 Amongst the glut of socially satirical black comedies that came out of Hollywood in the post-Kennedy years, Stanley Kubrick’s Dr. Strangelove (1963) has the respect, and Tony Richardson’s The Loved One has the classy pedigree (a screenplay by Terry Southern and Christopher Isherwood adapted from an Evelyn Waugh novel). But the only one I find to be even remotely funny is George Axelrod’s strenuously off-beat (and unrelentingly hilarious) skewering of '60s Southern California culture Lord Love a Duck.

Thier obvious filmic merits aside, I just personally have no taste for Strangelove’s brand of paranoiac political lunacy, nor do I find much that amuses me in The Loved One’s theater of the grotesque lampooning of the Los Angeles funeral industry (although I do adore Anjanette Comer's performance and Rod Steiger’s Mr. Joyboy has to be seen to be believed). In all aspects relating both to my peculiar sense of humor and uniquely twisted world-view, Lord Love a Duck (an expression of surprised bemusement much like, “I’ll be damned!” or Fred Mertz’s exasperated, “For corn’s sake!”) hits me where I live. Choosing for its satirical targets the idiosyncrasies of '60s American pop-culture that are near and dear to my kitsch-loving heart (celebrity worship, youth culture, beach party movies, consumerism, the California school system, pop-psychiatry, religious attitudes about sex…and that's just for starters), Lord Love a Duck is virtually made-to-order for a guy of my retro-centric sensibilities. Of course, what really pays dividends when a satire is as perceptive and acerbically witty as Lord Love a Duck (adapted from a 1961 book I haven't read by Al Kine) is that you can look at it some forty-plus years later and marvel at how the jokes still hit home and maintain their relevance because people (God love 'em) really don't change all that much.
Lord Love a Duck is a sun-baked Faustian farce about Southern California teen Barbara Ann Greene (Weld), one-time Head Cheerleader and most popular girl at Longfellow High School, now facing an uncertain future of dreaded anonymity as a senior at the ultra-modern Consolidated High. The day before school is to start, Barbara meets the mysterious Alan Musgrave (McDowall), a transfer student from Irving High School with a checkered past. Calling himself Mollymauk (the name of an albatross-like bird, a replica of which Alan has hanging from his keychain as a kind of hypnosis charm) Alan professes to have the ability to make all of Barbara’s deepest desires come true…she need only give voice to them.

As it turns out, there is indeed something awful about Alan, especially in the way he goes about (without benefit of making explicit either motivation or method) seeing to it that each and every one of Barbara Ann’s tinpot dreams come true. Unfortunately, in the grand tradition of fairy tales and aphorisms that warn “Be careful what you wish for, for you will surely get it,” Barbara Ann’s dreams consistently fail to measure up to her expectations. A lamentable realization for the not-very-bright baton-twirler, one compounded by the fact that the undisclosed “cost” of each wish (a sacrificial disaster or tragedy befalling someone in Barbara Ann's orbit) seems to escalate exponentially.

If at the start it looks as though the selfless Alan is but a tool to be used by the self-interested Barbara Ann to achieve her ambitions, toward the end it begins to dawn that perhaps Alan is harboring a secret agenda of his own and it's in fact Barbra Ann who's been the dupe. (Alan, like an asexual Myra Breckinridge, appears to be on some kind of personal crusade to dismantle and subvert the fabric of American culture one myth at a time.)
Lord Love a Duck not only uses its fairy-tale structure as a framework on which to hang a broad array of satirical jokes and sight gags, but as a device to dispense with anything resembling world-as-we-know-it realism. A scathing, surreal, jet-black comedy baked under a smoggy Southern California sun, Lord Love a Duck is a film I only recently discovered (thanks again, TCM!) but has fast become one my favorites.

As I commented upon in an earlier post about Peter Bogdanovich’s What’s Up, Doc?, I don’t really understand comedy well enough to know why it sometimes works and why at others, it falls flat on its face. Satire, in particular, seems a peculiarly dicey realm, given how important a role the establishment of tone and balance plays into the comedy payoff. If the world presented is too lunatic, there’s no reality in which to ground the humor and everything just comes off as silly. Lord Love a Duck wins points by giving Los Angeles and '60s pop-culture (and its already built-in absurdities) just enough rope of verisimilitude with which to hang itself.

Actors, both comic and dramatic, attest that comedy is infinitely harder than drama, and I’m inclined to agree. I’m guilty as the next person of devaluing good comedic performances (Gene Wilder should have won an Oscar by now), but that can’t be said of my assessment of Lord Love a Duck, a film which succeeds largely due of its very talented and funny cast. While I’m less fond of Roddy McDowall in this (during this time in his career he seemed to be giving the exact same performance from film to film) Lola Albright and especially Tuesday Weld (doing her best work EVER) are pure gold. Albright brings unexpected pathos to her role as Barbara Ann’s promiscuous, cocktail waitress mother (“Honey, you know I never go out with a married man on the first date!”). Her brief yet memorably tragi-comic performance has a heartbreaking poignancy to it.

Long one of Hollywood’s most underrated talents—her career hampered by an I-dare-you-to take-me-seriously name and a baby doll voice—Lord Love a Duck’s happiest surprise is Tuesday Weld (not really a surprise, actually. She’s splendid in the 1974 TV-movie, Reflections ofMurder, and brilliantly ups the ante on playing maladjusted cheerleaders in 1968’s chilling Pretty Poison). Lord Love a Duck showcases Weld’s talents as a truly gifted comedienne and affords her the opportunity to show what a nuanced dramatic actress she can be when given the right material.


THE STUFF OF FANTASY
Every film that sets out to offend (as most black comedies do) needs at least one setpiece moment of sublime vulgarity. Lord Love A Duck boasts an irresistibly over-the-top shopping spree for cashmere sweaters that erupts into a father/daughter consumer orgy.The screwball/suggestive colors of the sweaters provide as many laughs as the incestuously orgasmic reactions they elicit from Barbara Ann's father: Grape Yum-Yum, Banana Beige, Lemon Meringue, Pink Put-On, Papaya Surprise, Periwinkle Pussycat, Turquoise Trouble, Midnight A-Go-Go, and Peach Put-down. At this point in the film I was aware that I liked Lord Love A Duck, but after this scene, I knew I LOVED it. This sequence is the absolute best in mainstream cinema weirdness!

I could go about Lord Love a Duck's many other merits, but in the interest of space, let me call attention to the top-notch turns by Ruth Gordon, Harvey Korman, martin West, and Donald Murphy.

THE STUFF OF DREAMS
Lord Love a Duck was promoted with the tagline “An act of pure aggression,” but truth in fact; it’s mostly an act of pure cantankerousness. For all its outrageousness, at its core it’s a middle-aged, middle-class diatribe by the older generation (those more amenable to the comedy styles of Alan Sherman, Ernie Kovacs, Steve Allen, or Sid Caesar) against America’s burgeoning youth movement. A movement that was swiftly rendering director/ writer George Alexelrod’s patented brand of "tired businessman" comedy (The Seven Year Itch, Will Success Spoil Rock Hunter? How to Murder Your Wife) old-fashioned, if not obsolete.

Forty three years-old at the time this film was made, Axelrod was well past the age of distrust for the teenybopper set, and one can almost taste his vitriolic annoyance at what had become of his world of martinis, big bosoms, and smirky sex jokes. All of which probably accounts for why I find Lord Love a Duck to be so terribly funny. There's a really pissed-off, old fart sensibility behind it all that gives each satiric barb a particularly acrid sting not possible were the film coming from a place of affection. Or even understanding, for that matter. I guess that's something I can relate to.
If you’re among those who are of the mindset that we currently live in an age of smart phones and increasingly not-so smart  people, then the hedonistic, amoral, anti-intelligence, youth-centric world lampooned in Lord Love a Duck provides irrefutable and entertaining evidence of the fact that we didn't just arrive at this state of affairs overnight. It’s a course we've been headed on for quite some time.
Copyright © Ken Anderson
Posted by Ken Anderson at 10:52 PM