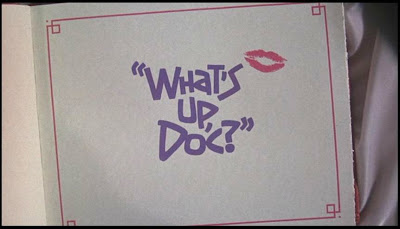 Getting two people to agree on what is, or is not, funny, is as difficult as finding one person who actually found Bob Hope amusing.


I've never been much of a fan of the kind of 1930's screwball comedy Peter Bogdanovich pays homage to in What's Up Doc? (I find them exhausting), so it surprises me that this film ranks so high on my list of all-time favorite movies. Well, it's not that much of a surprise. For no matter how you categorize it, What's Up Doc? is one of the most consistently funny movies I've ever seen. And it remains so after multiple viewings. Mercifully, What's Up Doc? owes merely a polite nod to the screwball romantic comedy genre and is stylistically closer in tone to the absurdist, anarchic slapstick of The Marx Brothers and Bugs Bunny.
In fact, in attempting to recapture the comedy style of a bygone era, What's Up Doc? should be credited with, if not exactly originating, at least spearheading that unique brand of comedy which found great popularity in the '70s: the zany, self-referential, genre spoof.  Mel Brooks and Gene Wilder mastered in this sort of thing throughout the '70s, and come the '80s, Jim Abrahams and the Zucker Brothers took it to a whole new level with Airplane.

What is so hilariously off-kilter about What's Up, Doc?, and what ultimately works so well to its advantage, is the incongruity of seeing the hip, laid-back stars of the '70s (whose stylistic conceit was a lack of any discernible style at all) shoehorned into the rigidly stylized, almost vaudevillian conventions of '30s anarchic comedy. Though it is clearly set in the here and now, the characters all behave as though they'd never seen a Three Stooges or Laurel & Hardy movie before. We in the audience anticipate the familiar  comedy set-ups and farcical comings and goings, but the people onscreen are so comically caught-off-guard and put out by the absurdity of the circumstances they find themselves in, an unexpected layer of funny takes over.
Even the film's location (, a city so full of vertical angles and winding roads that it looks like it was designed by a Warner Bros. cartoonist) adds to the feel of the contemporary clashing with the old-fashioned. Whether intentional or not, What's Up, Doc? works so well because the destruction of order - the raison d'etre  of anarchic comedy - occurs not only within the plot (which revolves around identical suitcases and a non-identical case of mistaken identity), but in the basic construct of the film itself: The tightly-wound wackiness of studio-bound 1930s comedy wreaks havoc on Hollywood's most relaxed film era in America's most notoriously laid-back city.

I think this is one of the (many) reasons why Bogdanovich's At Long Last Love failed so miserably for me. Setting that 1930s screwball musical comedy actually in the 1930s only served to emphasize how poorly our contemporary stars (in this case, Burt Reynolds & Cybill Shepherd) withstood comparison to their '30s counterparts. The fun of What's Up Doc? is seeing the very contemporary Barbra Streisand (at her least grating here. She's really quite charming when her co-stars are allowed to be funny, too) and Ryan O'Neal thrust into a riotously retro comedy and rising to the occasion with nary a wink to the audience (whereas At Long Last Love was one long, protracted "Aren't we clever?" wink).

I don't pretend to understand comedy. I have no idea why some things are only funny once (like most SNL skits), while others (episodes of I Love Lucy, for instance) can make me laugh even after they've grown so familiar I know every punchline by heart. One thing I do know is that the dissection of comedy is seldom effective except by example, so here are a few screen caps of scenes that never fail to crack me up:


PERFORMANCES
I like Barbra Streisand a great deal, but a little of her can go a long way. Her screen persona is so strong that it can easily (and often does) overwhelm a film. The toned-down Streisand of What's Up, Doc? is my favorite. Bogdanovich somehow gets her to actually interact with her co-stars, and she and the film are all the better for it. Ryan O'Neal is fine, but you sort of wish that Bogdanovich could  have eased up on his Cary Grant fixation enough to give the actor an opportunity to find a comedy rhythm of his own. After all, Ryan O'Neal is already pretty stiff and prone to underplaying, so why hem him in further by having him imitate (badly) a star as as inimitable as Grant?  Happily, Paper Moon, released the following year, would show O'Neal off to better comic advantage. Of course, the real comedy prizes of What's Up, Doc? go to the late-great Madeline Kahn and the riotously eccentric Kenneth Mars. Both are such idiosyncratically inventive comic actors that you keep discovering new, brilliant bits of genius in their performances on each viewing.
THE STUFF OF FANTASY
My predilection for movies with actors turned into unearthly gods and goddesses by gifted cinematographers (in this instance,  Lazlo Kovacks of Shampoo and ) rears its head once again. Streisand and O'Neal look positively gorgeous in this movie and are burnished to a high movie star gloss thanks to their super-dark 70s tans. Really, both are photographed so lovingly they look airbrushed. 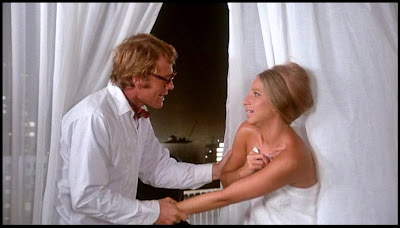 THE STUFF OF DREAMS
The escalating laughs of What's Up, Doc? reach something of a deafening crescendo during the film's final third, which is comprised wholly of a pull-out-all-the-stops, cross-town, entire-cast, slapstick chase scene to end all chase scenes. The sheer number of stunts and gags that follow one after another in quick succession begs a repeat viewing just to take it all in. Ingenious, breathtaking, and refreshingly free of CGI, it's one of those rapidly vanishing movie thrills: the live-action action scene. And if you don't think this kind of thing is easy to pull off, dig up a copy of  Steven Spielberg's woefully unfunny chaotic comedy 1941. Talk about a lot of sound and fury signifying nothing. 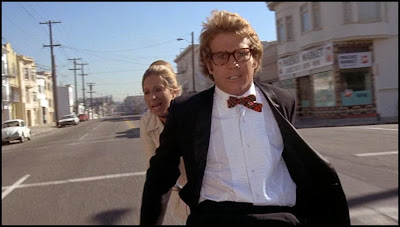 urprisingly (at least to me, anyway), What's Up, Doc? was the first Barbra Streisand film I ever saw. When I was a kid, I had this image of her as a contemporary of Judy Garland and Peggy Lee; a possibly middle-aged entertainer who wore gowns, piled-up hair, and sang slow songs while standing stock still on those boring (to me then) TV specials and variety shows. She didn't dance like Joey Heatherton or wear mini skirts like Nancy Sinatra, so I got it in my mind that she was an entertainer for "old people" (more Palace than American Bandstand). It wasn't until 1971 when her single "Stoney End" started to be played on the radio that I even realized she was a young woman. I've since seen all of Streisand's films (not really recommended), but this movie still stands out as my favorite.

In the intervening years since What's Up, Doc?, it seems as if a sense of desperation has crept into contemporary comedies. Filmmakers clueless to the intricacies of the genre invariably resort to the easy-out of the gross and scatological, or they lazily attempt to pad out a one-joke TV skit to feature film length.
Because it's so deliriously silly and effortlessly funny, it's easy to overlook the fact that What's Up, Doc? is the result of a razor sharp screenplay; precise editing; a meticulous, painstaking director; and a great deal of talent both in front of and behind the camera. Comedy rarely gets its due when assessed alongside dramatic films, but it's about time for What's Up, Doc?, to be recognized for the comedy classic it is.