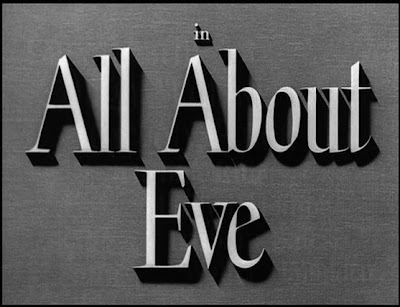 In spite of owning two 2 DVD copies (those “Special Edition”s get you every time) and having seen the film more times than I can count; All About Eve is one of those movies I still find I’m unable to tear myself away from whenever I happen to come across it while channel surfing the TV. Perhaps due to its origins as a short story published in Cosmopolitan magazine in 1946 ("The Wisdom of Eve" by Mary Orr), All About Eve's somewhat vignette structure lends itself perfectly to an la carte viewing. It’s one of those rare films that's equally satisfying whether watched in its entirety or in brief snippets. Brimming with witty dialog, keen performances, and by-now classic cinema “moments,” All About Eve is an all-time, escapist favorite.


The familiar story of how aging Broadway diva, Margo Channing, takes conniving über-fan, Eve Harrington, under her wing and lives to regret it, is a tale borrowed and revamped in films as diverse as: 1987's  Anna, which cast Sally Kirkland as an aging Czechoslovakian film star taking in the deceitfully ambitious Paulina Porzikova; 1972's The Mechanic, where aging hit man Charles Bronson plays father figure to  deceitfully ambitious hit man-in-training, Jan-Michael Vincent; and, of course, Paul Verhoeven’s  Showgirls (1995), which defies description. Each of these films is both a legacy attesting to the enduring dramatic appeal of All About Eve’s simple plot and a testament to the old adage, "Often imitated, never duplicated."

WHAT I LOVE ABOUT THIS FILM:
What do Valley of the Dolls, Faster Pussycat! Kill! Kill!, Kitten With A Whip, and All About Eve have in common? (Insert joke here.) Answer: They are, without a doubt, the most quotable movies ever made. Anyone who's a fan of All About Eve has his favorite quotes. Here are just a few of mine:


Lloyd- "Eve did mention the play, but just in passing. She'd never have the nerve to ask for the part of Cora."
Karen- "Eve would ask Abbott to give her Costello."

Eve- "Get out!"
Addison- "You're too short for that gesture. Besides, it went out with Mrs. Fiske."

Birdie- "Next to a tenor a wardrobe woman is the touchiest thing in show business. She's got two things to do—carry clothes and press 'em wrong. And don't let anybody try to muscle in."

Miss Casswell- "Oh, waiter!"
"That isn't a waiter, my dear. That's a butler."
Miss Casswell- "Well I can't yell, "Oh, b!" can I? Maybe somebody's name is !"
Addison- "You have a point. An idiotic one, but a point."
PERFORMANCES
Davis is too good an actress and Margo Channing a character too broadly drawn for this to be my favorite Bette Davis performance (that would have to be Regina Giddens in The Little Foxes or her turn in The Letter), but for anyone seeking the full Bette Davis "experience" in all its glory, this is the film to see. Inspiring literally generations of impersonators, impressionists, and drag queens, Bette Davis as Margo Channing, the ultimate over-theatrical diva, is an actress 100% on her game. The film just wouldn't work if we didn't buy Margo as this dynamo of histrionic affectation who never stops being "on" even after the curtain comes down. And it's to ' credit that she somehow gives this potentially one-note character a great deal of depth. Far from being over-the-top or camp, creates in Margo, if not exactly a recognizably real human being, then a surprisingly likable, larger-than-life creature of fiction possessing warmth, humor, and intelligence.

Part of Margo's intelligence lies in her lack of illusions about herself. She knows she's an aging actress in a business preoccupied with youth, but she's terrified of inhabiting a world which requires nothing more of her than just to be "herself'." The problem: after a lifetime of play-acting on the stage, Margo isn't quite sure who that is.


THE STUFF OF FANTASY
As much as I delight in All About Eve’s lively dialog, I’m quick to admit that the film is at times too clever for its own good. All that sophisticated repartee has a way of distancing me from the characters and keeping me at a remove from the drama at hand. Still, it’s no small feat the way in which the film so thoroughly succeeds in pulling off the kind of witty wordplay and bitchy sarcasm it so readily scarifies audience engagement to achieve. Indeed, a recent viewing of 1973's The Last of Sheila (screenplay by Anthony Perkins and Stephen Sondheim) points out how hard on the ears failed attempts at biting, sophisticated bitchiness can be.

THE STUFF OF DREAMS
All About Eve has been a part of my film consciousness for so long that I have no direct recollection of the first time I saw it, nor any idea of what my first impressions were. Watching it now is an experience, I would imagine, similar to a child’s when being read his favorite bedtime story: whatever pleasures initially derived from the unexpected twists of plot and character have since been supplanted with the thrill of anticipating, then reliving, the delightfully familiar.


I love All About Eve’s catty, backstabbing vision of life in “The Theatah,” and I never tire of Margo’s tantrums, Eve’s Machiavellian power plays, or ’s snide comments. But, given how much fun I always have watching it, emotionally speaking, All About Eve is kind of a cool experience. The film’s sleek professionalism is entertaining as all get out, but I can’t say I’ve ever been moved by Margo’s age-angst and well-placed paranoia. By way of contrast: Sunset Boulevard and The Wizard of Oz 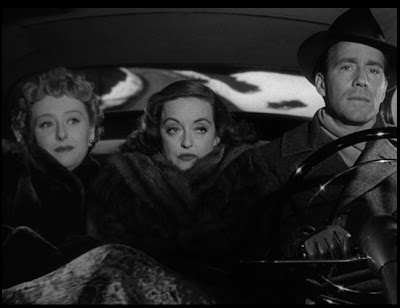 Perhaps there was a forgotten time long ago when Margo’s fear of aging (“Forty. 4-0!”) and Eve’s hunger to be loved carried some emotional heft for me, but I’m afraid too many years of impersonations, spoofs, and camp parodies have made it impossible for me to enjoy All About Eve on any level deeper than exquisitely quotable melodrama.
In the final analysis, All About Eve’s appeal for me may be all surface and style, but trust me, that’s far from a complaint.