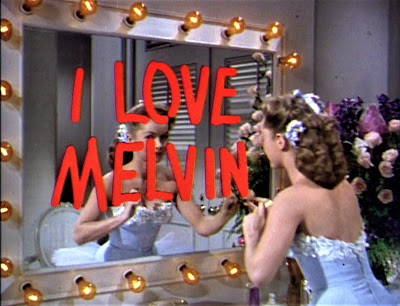 In what must certainly be one of the oddest cases of inspiration I can think of, I was moved to revisit this pleasant, largely overlooked MGM musical after recently suffering through the film, Love and Other Drugs (2010), a fatuously formulaic romantic dramedy that crosses the creaky "ailing kook" scenario (think Sandy Dennis in Sweet November) with the overused yuppie-sleazeball-gets-redemption, cliché (Rain Man). The re-teaming of 's Jake Gyllenhaal and Anne Hathaway in this painful-to-sit-through exercise in forced chemistry got me to thinking about the days when reteaming past romantic co-stars was something of a common practice in
Donald O'Connor and Debbie Reynolds were twin, cute-as-a-button, bundles of energy in 1952's Singin' in the Rain; but, as the 19-year-old Reynolds was the love interest of 39-year-old Gene Kelly, (O’Connor was 26), the pair shared few scenes together. To cash in on that film's success, MGM swiftly re-teamed the more age-appropriate duo in this feather-light, low-budget feature that, while ultimately failing to launch the two as the next Judy Garland / Mickey Rooney, proved itself to be one of the more light-heartedly entertaining entries in MGM's late-era roster of musicals.
Being the story of a photographer’s assistant who tries to win his girl by promising to get her picture on the cover of Look magazine (that’s the entire plot, folks!), I Love Melvin is about as insubstantial as they come. But in sidestepping the excesses and pretensions of some of the more elephantine musicals of the day (An American in Paris, Seven Brides for Seven Brothers, The King & I, South Pacific, etc.), I Love Melvin distinguishes itself by way of its simplicity. The charm rests squarely on the appeal and chemistry of its two stars, and its wisp of a plot never gets in the way of their considerable talents.


WHAT I LOVE ABOUT THIS FILM
When I was growing up, Friday nights were a big deal around our house because my parents let me stay up late and watch TV. Before the age of cable and the infomercial, late-night television programming was an oasis of old movies. The Late Show; The Late, Late Show; and The Early Show offered a virtual Master’s Class in film history. All manner of obscure and noted films of every stripe were unspooled (along with countless commercials for the local auto dealership) exposing me to a library of before-I-was-born movie gems, many of which rank among my favorites to this day.


I first saw I Love Melvin (even its title pokes fun at its modest ambitions) when I was 13-years-old, sullenly holed up in my room in a typical adolescent funk over something or other. I had never even heard of the film when I settled down to watch it, and what I most vividly recall is how quickly and thoroughly the bouncy cheeriness of this unassuming little musical overcame my pre-teen gloom and fixed me in rapt attention to the dazzling singing and dancing on display. On reflection, it's clear that I responded strongly to the way Debbie Reynolds's character was depicted as a moony, dreamer type. Her penchant for losing herself in comically overblown, Walter Mitty-esque fantasies echoed my own experience.
Since the daydreams and fantasies of a shy, introverted kid eventually led to a fulfilling life as a professional dancer on stage, film, and TV—that’s MY story— I’ve always held a spot in my heart for movies that encourage young people to believe in and work towards their dreams (Xanadu: “Our dreams don’t die. We kill them!”; The Rocky Horror Picture Show: “Don’t dream it, BE it!”; and of course, Nine, and the song that gives this blog its name).

PERFORMANCES
I’ve always liked Debbie Reynolds, but I can't say I've always had the stamina to sit through some of her movies. She was the screen's first and best Tammy (Tammy and the Bachelor [1957]), but I wouldn't wish Goodbye, Charlie (1964) or How Sweet It Is! (1968) on my worst enemy. Yet, even in these less-than-pleasing outings, Reynolds' great gift was that she exuded a genuine likability and tomboy toughness that added a much-needed spark when the material at hand wasn't up to her talents. In I Love Melvin she is in fine form, handling the comedy and musical numbers with graceful assuredness.

The rubber-limbed Donald O’Connor is the kind of extraordinarily athletic dancer that I never tire of watching. Like Gene Kelly (a personal fave), Donald O’Connor always looked like he was having the time of his life when dancing. In I Love Melvin, O'Connor's boyish appeal so perfectly suits Reynolds' wholesome charm that the only reason I can think of for why this film didn't click with audiences is because, as written, the romance only STARTS when the movie ends. Up until that point, it's all pursuit; there are surprisingly few scenes of the couple just getting along. By way of contrast, the pairing the almost asexual boyishness of O'Connor with the smoldering, sex-on-the-hoof Marilyn Monroe in 1953's There's No Business Like Show Business was so odd that it bordered on the perverse.

THE STUFF OF FANTASY
I know it's just my personal taste, but the '50s were my least favorite decade for musicals. Not only did the need to compete with the burgeoning threat of television result in a glut of visually garish, needlessly grandiose behemoths, but the choreography at the time--with its modern dance influence--was of the squatty, inelegant style showcased in the "Get Happy" number from Summer Stock (1950) and later parodied in the "Thanks a Lot, But No Thanks" number from It's Always Fair Weather (1955). I think a lot of people who say they don't like movie musicals got that way after watching a '50's musical.

I Love Melvin is the exception that proves the rule, if only because it contains one of my top, top favorite musical numbers...one that ranks with the classic clips of Astaire, Busby Berkeley, Bob Fosse, and Eleanor Powell. It's the dance duet, "Where Did You Learn To Dance?" performed with personality plus by Reynolds and O'Connor.  Exemplifying all that is right with the film, it's a number shot on a simple set with no pyrotechnic choreography, yet achieves moments of tiny greatness in merely letting the energy, talent, and charm of the two carry the sequence. It's one of those disarmingly "simple" numbers that you know was hell to get to look so flawlessly effortless. 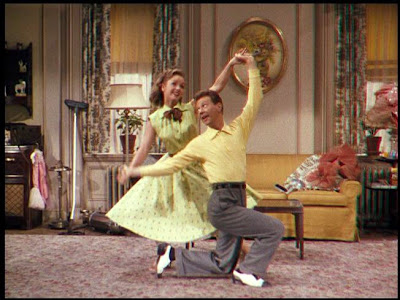 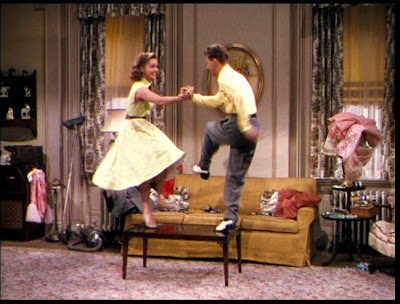 It makes me feel like a kid just watching these two underrated talents burn up the screen. As far as I'm concerned, it is THE best number in the film.


THE STUFF OF DREAMS
It's to I Love Melvin's credit that, whether intended or not, so many of the scenes involving Reynolds and her onscreen family recall the eccentrically homey touches Vincente Minnelli brought to Meet Me in St. Louis. Reynolds's character lives with her parents and younger sister in a small apartment (there are some great location scenes, especially of ) and their interplay is nicely modulated with moments of character comedy that is farcical but never overplayed. By way of conflict, Reynolds is given an unsuitable suitor - the handsome Richard Anderson - in what was once referred to as "The Ralph Bellamy role" (later known as "The Dennis Miller role").  As is often the case when the heroine is given a rival who's fated to be dumped for the hero by the final reel, I Love Melvin jumps through hoops trying not to depict Reynolds' dismissive treatment of Anderson as unkind, but it never truly succeeds.
I've become something of a broken record of late as I bemoan, in post after post, how I feel contemporary movie musical talents fail to measure up to even the most workaday talents of the past. I don't suspect my opinion will be changing any time soon. Not when I Love Melvin; a sprightly film of hummable tunes, clever dances, and captivating performances, can be considered so commonplace in its day as to be overlooked, yet there's not a director, choreographer, composer, or performer today capable of coming within a hair of its modest brilliance.