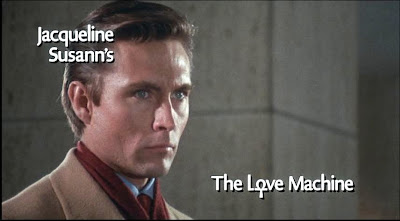 "The Waiting Is Over...The Love Machine is on the Screen!"


So declared the graphically austere poster ads (a gold ankh against a simple black background) heralding the arrival of The Love Machine —sorry, Jacqueline Susann's The Love Machine— to movie theaters in 1971. Hard to believe when looking at the film now, but there was a degree of anticipation attending the release of The Love Machine, the big-screen adaptation of Susann's 1969 best-selling follow-up novel to the phenomenally successful, Valley of the Dolls.

A considerable amount of this anticipation was due to so much having transpired in the four years since 20th Century-Fox first released Valley of the Dolls to big boxoffice and a flurry of lousy reviews in 1967. First and most significantly, Jacqueline Susann had proven herself a viable boxoffice name in her own right, capable of selling tickets regardless of the relative artistic or critical merit of the project. Secondly, movies themselves had grown increasingly permissive in terms of nudity and language since 1967 (Fox's own Myra Breckinridge had seen to that); thus there existed, at least among Jacqueline Susann's broad fan base, the hope that the film of The Love Machine would have license to be every bit as tawdry and smutty as the source novel.

In the minds of many there also existed the misplaced and misguided confidence that The Love Machine was going to be a better film than Valley of the Dolls. Why? Well, putting aside for a moment the obvious assumption that it would be near impossible to make a film that could be worse; it was Jacqueline Susann herself (who had never made secret her dislike for the movie version of Valley of the Dolls ) who assured her fans that both she and her husband, Irving Mansfield, were going to take steps to guarantee their creative input in bringing The Love Machine to the screen.


Indeed, thanks to a lawsuit filed by Susann against 20th Century-Fox pertaining to Beyond the Valley of the Dolls (1970)—that unofficial, unauthorized, non-sequel—Susann and Mansfield were able to take The Love Machine to the greener pastures of Columbia Pictures. There, Susann acquired $1.5 million for the rights, a possessive author's credit, and the title of executive producer (apt enough, given that he was a TV producer by profession and The Love Machine was all about the television industry). ﻿﻿The Susann-Mansfield household was holding the reins to this project.

An author's possessive film credit of the kind exemplified by the clumsy title, Jacqueline Susann's The Love Machine, is most certainly rooted in vanity and product branding; but it also carries with it the implication the that the film is a true representation of the author's intent and vision. Well, as anyone will attest who's seen Stephen King's abominable self-penned 1997 TV-movie adaptation of his novel, The Shining (he disliked the many alterations and omissions in Stanley Kubrick's 1980 film); an author's participation in the adaptation of their work is in no way a reliable gauge of anything resembling quality.
The Love Machine tells the story of the swift rise and fall of Robin Stone, an ambitious local news anchor who ruthlessly muscles his way into the job of network television president. Despite looking thin, wan, and desperately in need of a blood transfusion; Robin is an irresistible ladykiller who leaves a trail of broken-hearted lasses clad in blue bathrobes in his wake. With Nielsen ratings and audience-share figures where his heart should be, Robin Stone is like a male version of Faye Dunaway's character in Network (1976), crossed with Valley of the Dolls' Helen Lawson, with a little of Stephen Boyd's Frankie Fane from The Oscar (1966) on the side.


As with most of Jacqueline Susann's characters, Robin Stone is allegedly based on a real-life individual. In this case, the late CBS TV executive, James Aubrey - the man responsible for The Beverly Hillbillies and a host of other lowbrow moneymakers during the '60s. Like his movie counterpart, Aubrey is said to have been a calculatingly shrewd cookie who held the TV viewing audience in contempt and made a fortune banking on the public's insatiable appetite for mediocrity. Judging by the popularity of today's Jersey Shore/Kardashians train wrecks, you can't say the guy wasn't something of a visionary.

WHAT I LOVE ABOUT THIS FILM
My fondness for a certain brand of bad film is as difficult to explain as it is to defend. It's not like I just get off on making fun of them. On the contrary, most of these films are very professional, well-made films in every department. What I think I respond to is that scary zone in the creative arts where the attempt fails to match the execution. Where all the talent, creativity, and hard work on one end just somehow ends up being 100% opposite of what anyone intended. It fascinates me because I believe it can occur at any moment, no matter how heavily the deck is stacked for success. For example: take the idea of Marlon Brando putting cotton in his cheeks in The Godfather. That's something that could have turned out disastrous, but instead became iconic. Or what about Al Pacino's Cuban accent in Scarface. Wasn't that a huge risk? It could have derailed the entire picture!

The point I'm making is that the collaborative art of film is often like a dance on a wire: fiasco or triumph is sometimes based on tiny, intangible miscalculation or moment of blind overconfidence. Something which can't be known or sensed until after the film is already in the can. Hindsight makes it all seem as though it could have been avoided, but that's just not the case. The crapshoot of it all is what fascinates me.

If it's true in life that we learn most from our failures, I believe there to be similar lessons to be gleaned for the film buff confronted with a well-intentioned mess. When you watch a film that cost millions, involved hundreds of decisions, hours of hard work, the collaboration of many talented individuals...and the result is sometimes deplorable, you staring straight into the face of the elusiveness of excellence. That or perhaps hubris, too many cooks spoiling the broth, or maybe (worst of all) professional cynicism: films which don't really care if they're good, so long as they make money.

The Love Machine tries to be a hard-hitting, cynical, claw-his-way-to-the-top drama along the lines of The Sweet Smell of Success and The Young Philadelphians; but for all its faddish clothes, bare bosoms, and cuss words, it's fundamentally a creaky Fannie Hurst melodrama. It feels as though it's striving hard for sensation and daring, but its focus needs adjusting. It's too shallow for a character drama, too superficial for a TV expose, and far too cliche-ridden to work effectively as drama. The Love Machine's utter cluelessness about how old-world it actually is makes for addictive viewing.


PERFORMANCES
Robin Stone is portrayed with remarkable ineffectualness by the late actor (and last-minute replacement) John Phillip Law, last seen sporting angel's wings and a feathered diaper in Barbarella. By all accounts a terribly nice guy in real life, Law latches onto Robin Stone's closed-off, inexpressive side and gives a performance too stiff even for a character referred to as a machine. Susann had wanted Sean Connery for the role.

Dyan Cannon has always been a favorite of mine, but her performance here (no great shakes, but heads above the rest of the cast) is consistently undermined by the jaw-dropping, high-fashion get-ups she's called upon to wear. Given that's she's not really provided a believable character to play, her bizarre fashion sense always takes center stage. According to a Jacqueline Susann bio, Cannon was so struck by a case of the giggles during a preview of The Love Machine (inspired by both her performance and the film), she had to excuse herself.

For anyone finding the film hard going (it's rather slow by today's standards) I beg you to stick around for the climactic " party fight scene." Here Ms. Cannon (balancing 23 pounds of teased hair) finally abandons her heretofore starchy acting style and lets loose with that infectiously raucous laugh of hers, setting in motion a truly memorable free-for-all that should have become a YouTube camp highlight by now. In trying to top Valley of the Dolls' infamous wig-down-the-toilet scene, The Love Machine finally does something right. 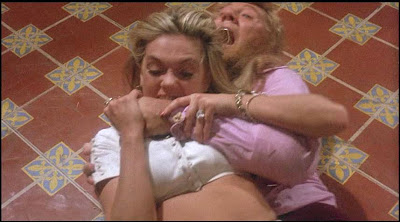 When The Love Machine was first released to theaters, I was a mere 13 years old. Too young to see the much-ballyhooed motion picture, but old enough to take my mom's paperback novel to school and pore over the "dirty parts" with my schoolmates. I'm not sure what my problem was at such an early age, but I was very much into the sleazy but entertaining novel, and went out and bought an "ankh" ring just like on the paperback cover. (In my defense, I grew up in San Francisco during the hippie era, and ankhs were kind of all over the place.) I also unsuccessfully tried to persuade my sister to buy that Faberge "Xanadu" perfume that was cross-promoted in the film (ads for which recommended you mark "his" favorite spot with an "x").

2021 update
In spite of my unseemly youthful preoccupation, I didn't actually see The Love Machine until I was well into adulthood. I'm happy to say that I wasn't disappointed. While not nearly as much fun as Valley of the Dolls, The Love Machine has more than enough in the way of over-the-top fashions, poky dialog, and questionable performances to rank high among my favorite guilty pleasures.