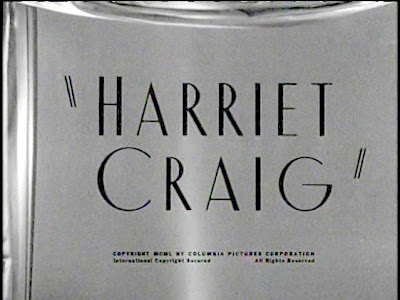 If ever there was an actress about whom the above quote applies (wholeheartedly and in all its transmutations) — it’s Joan Crawford: one of the few actresses I find equally fascinating whether she’s delivering a good performance or gnawing at the scenery. An actress capable of sometimes astonishing emotional subtlety, what with the quicksilver flashes of tenderness or wounded vulnerability those fabulously expressive eyes of hers could convey; she was equally enjoyable as an over-the-top, tough-as-nails, slightly mannish, bitch-goddesses.
Harriet Craig, the story of a woman who takes the role of housewife to its literal and tragic extreme, is a film that had been on my “must see” list since the early '80s when someone informed me that Crawford’s daughter Christina (she of the incendiary Mommie Dearest) recommended it along with Queen Bee as the two films to see if you wanted to get a glimpse of what the real Joan Crawford was actually like. Already acquainted with the extravagant camp of Queen Bee, I finally got to see Harriet Craig back in 2007 when TCM hosted a Joan Crawford marathon. 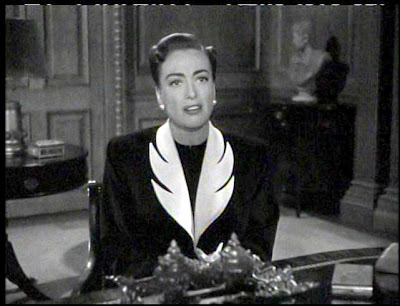 The verdict? Well, as a representative page carved out of the post-Mommie Dearest Joan Crawford mythos, Harriet Craig doesn't disappoint. On the contrary. The film is full of so much melodrama and overheated emotion that for long stretches of time it feels as if you’re watching Joan Crawford as Faye Dunaway portraying Joan Crawford. Harriet Craig (the third screen incarnation of George Kelly’s 1925 Pulitzer Prize-winning play Craig’s Wife) is in many ways the quintessential Joan Crawford vehicle. Drawing upon little more than the same standard-issue icy imperiousness she brought to almost all of her post-MGM roles (regrettably, she doesn't slap anyone here, but that’s about the only thing missing from her usual arsenal), Joan Crawford and her grande dame of the screen image are so perfectly suited to Harriet Craig, it feels as though the role had been written expressly for her.
In all matters practical, Harriet Craig is the perfect wife. Beautiful and poised as a hostess, attentive and spuriously deferential to her adoring husband Walter; Harriet runs their tastefully elegant upper middle-class home with the efficiency and warmth of a science lab. In that curious definition of “housewife” indigenous to the moneyed set, Harriet neither cooks nor cleans, raises no children, and has no job. She merely spends every waking hour running roughshod over the harried staff of housekeepers (servants, as she likes to call them), even going so far as to engage Clare, her grateful, poor-relation cousin, as free labor. All in the service of creating the perfectly clean, perfectly orderly, perfectly loveless home. Trouble arises when Harriet, fearful that a job promotion for her husband might loosen the short tether she has kept him on for the entirety of their marriage, attempts to broaden the scope of her manipulation.


The possessive title of Craig’s Wife, which both the 1928 silent (now considered lost) and the 1936 Rosalind Russell film adaptations retained, hints not only at the original play’s dated mindset, but subtly of its narrative thrust. In both versions Harriet is obsessed with her image and social position and goes to extreme lengths to prevent her name (that of being Craig’s wife) from being involved in any scandal.
Much in the manner that the title of Ibsen’s Hedda Gabler suggests the emotional remove of its protagonist from her married identity of Hedda Tesman, the revamped Harriet Craig is less about a woman’s fear of losing her social status as it is about her full and complete fixation on the marriage state as a means of obtaining emotional and financial security for herself. The husband is merely a means to an end.

Updated for the '50s, Harriet Craig wisely jettisons a distracting murder/suicide subplot that figured significantly in Craig’s Wife and instead settles itself firmly in traditional Crawford territory: a domineering woman attempting to manipulate the lives of those around her. Though melodramatic in structure, this suburban domestic cautionary tale is directed with an appealingly light touch by Vincent Sherman (who also directed Crawford in The Damned Don’t Cry and Goodbye My Fancy), getting overall relaxed performances from the cast that contrast to good effect with Crawford’s appropriately starchy overemphasis.
WHAT I LOVE ABOUT THIS FILM
A common criticism leveled at the film adaptation of Mommie Dearest was that its screenplay appeared to have been cobbled together from old Joan Crawford movies. Looking at Harriet Craig it’s hard to argue that point. The fictional Harriet Craig is every bit the neat-freak obsessive that Crawford was made out to be in real life, complete with a poverty-motivated backstory not dissimilar to Crawford’s own. So closely does Harriet Craig hew to our common perception of Joan Crawford as an anal-compulsive nightmare, entire scenes of Harriet going ballistic over some housekeeping transgression could be excised, colorized, and inserted into Mommie Dearest with disconcerting ease.

And therein lies one of the essential guilty pleasures of Harriet Craig (and to the same degree, Crawford’s Queen Bee): it’s like watching Mommie Dearest with the genuine article. I like Crawford very much when she’s good, but she is untouchable playing bad. She is such a raving monster in Harriet Craig that the DVD would not be out of place in a store's horror movie section.

PERFORMANCES
The much-maligned Joan Crawford is one of my favorite actresses. Even taking into account her mannered acting style and the severe, exaggerated appearance she adopted as she matured, to me she remains the most consistently interesting of the classic leading ladies of the silver screen. Truth in fact, I think I like her to a great extent because of her stylistic excesses. It’s often said of Crawford that she was more a movie star than an actress, but I’ve never found her to be any more one-note than respected studio-system stars like Cary Grant, Katherine Hepburn or Humphrey Bogart. I just think it’s a matter of taste. Personally, I never had much of a stomach for Cary Grant and find him to be one of the more arch and artificial stars (to borrow a line from Singin’ in the Rain) in the Hollywood firmament. Crawford, for all her studied emoting is a fascinating screen presence, and while only occasionally genuine, is always interesting.

Like most that have achieved and sustained movie star status, Crawford’s screen persona and perceived private personality were so intrinsically intertwined that, intentionally or not, her roles came to be imbued with a voyeuristically autobiographical essence. A phenomenon with Crawford’s work that has oddly increased, not lessened, over the years. There’s no way to watch Harriet Craig today without being continually hit in the face with the Crawford mystique. When scenes are not suggesting some passage from the Mommie Dearest canon of obsessive perfectionist, they’re recalling the haughty shrew characterization she fairly patented in the look-alike films that come under the heading “Joan Crawford vehicles.”

THE STUFF OF FANTASY
Were I writing about Harriet Craig back in the '60s or '70s, I would be declaring the film outdated and its heroine hopelessly out of touch with the ways men and women interact. But here we are in 2012 and Harriet Craig’s rather cold-blooded philosophies seem to be depressingly right in step with the times. In a comment to my previous post on The Bad Seed, a reader observed how the confidence and sense of entitlement displayed by Patty McCormack’s Rhoda would likely make her a CEO in today’s world. Similarly, I think Harriet Craig’s calculating pragmatism when it comes to love and marriage would today land her a bestselling book deal and make her the darling of the misguided, post-feminist set drawn to reality-TV contests in which women strike bargains to be snapped up by so-called eligible bachelors, or read books that provide "rules" for getting a husband. Making the talk-show circuit, Harriet's 1920s philosophy would no-doubt be seen as "empowering."

THE STUFF OF DREAMS
In appraising Joan Crawford’s Harriet Craig side by side with Rosalind Russell’s Craig’s Wife, I’d say that Russell’s is unquestionably the better performance (Russell’s performance actually gave me waterworks at the end), but Harriet Craig is the better film. The changes made to the original plot result in a tighter narrative and clearer central focus: Harriet’s pledge to herself never to wind up like her mother. What it loses is largely due to the lack of depth in either Crawford's performance or the screenplay. Crawford's Harriet is perhaps too steely to inspire much in the way of empathy.

Still in all, the film is a fascinating look at the somewhat superhuman expectations placed upon women in the achievement of the suburban ideal (add a couple of kids, a nicer disposition, and some genuine feeling for her husband, and she’s basically the perfect wife), and in a way, shows what happened to the role of the film noir femme fatale after the war—she became queen of the house.