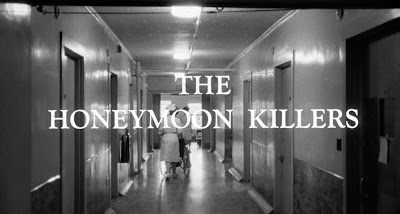 Spoiler Alert: Crucial plot points are revealed in the interest of critical analysis and discussion
“My Favorite American film.”  François Truffaut
“One of the purest movies I’ve ever seen.”  Michelangelo Antonioni
The Criterion Collection release #200 – DVD in 2003. Blu-ray in 2015.
I’m pleased The Honeymoon Killers has finally acquired the kind of mainstream critical acceptance and highbrow cineaste cachet it has always deserved. Precisely the kind of rep that should prevent the future unfamiliar and uninitiated from being scared away--as I was in 1970--by that Drive-In exploitation flick title. Sounding then to me like a movie that belonged on a double-bill with Werewolf in a Girl's Dormitory, I avoided The Honeymoon Killers for years, only finally getting around to seeing it when TCM aired it sometime in the early 2000s.
Originally to be titled either Dear Martha or The Lonely Hearts Killers when slated for 1969 release by low-budget independent distributor American International Pictures (of biker and Beach Party movie infamy). When that deal proved short-lived, the small film (lensed in 1968 for $200,000) acquired the grindhouse-friendly title of The Honeymoon Killers and was picked up for 1970 release by the somewhat more upscale Cinerama Releasing; an independent distributor specializing in handling high-profile niche-market films and arty genre movies (They Shoot Horses, Don’t They?, The Killing of Sister George). 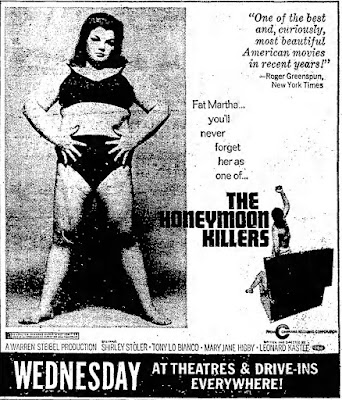 The Honeymoon Killers opened in Hollywood on Wednesday, March 11, 1970, at the Fox Theater on Hollywood Blvd. Actress Shirley Stoler was in attendance on opening night to judge a "Fat is Beautiful" contest.
Released in many markets just before Valentine’s Day, The Honeymoon Killers, despite its "Creature Features" title and grisly ad campaign, was surprisingly well-received by critics at the time. But due perhaps to the limited marketing resources of Cinerama Releasing or the film’s overall grim subject matter, it proved to be only a modest success at the boxoffice and quickly disappeared. It did well overseas, and in 1992 was briefly rereleased to art and revival houses in the US where more- appreciative reappraisals still failed to result in a significantly higher profile. Well-regarded and ranked by both of its lead actors as their career favorite film, The Honeymoon Killers never achieved the kind of mainstream recognition its widespread critical acclaim augured, but over the years it has built a steady and devoted cult following, becoming a marquee mainstay at revival theaters and midnight screenings. Today, it’s hailed as a modern classic of gritty realism by first-time director/screenwriter Leonard Kastle, a one-hit wonder who never made another film.
The Honeymoon Killers is based on one of those stranger-than-fiction true crime cases so bizarre that it has to be toned down just to register as even remotely credible on the screen. An unlikely pair—surly nurse Martha Beck and unctuous con-man Raymond Fernandez—meet through a Lonely Hearts Club, fall in love, and embark on a larcenous, ultimately murderous, partnership swindling lonely widows out of their savings…and doing away with the ones who give them trouble.
The real-life duo, dubbed the Lonely Hearts Murderers by the press for their practice of finding their victims through meet-by-correspondence Friendship Societies and Lonely Hearts Clubs, embarked on what one journalist referred to as their “Career of lust and murder for profit” in 1947. They were finally arrested for their crimes in 1949, and both executed in 1951.
The Honeymoon Killers is bookended by documenting title cards asserting its factual basis. Opening with a printed declaration of the truth of the events to follow, the film closes with a verifying coda citing March 8, 1951, as the date of Martha and Ray’s execution by electric chair in Sing Sing prison. Given all this, what fascinates me is that while the narrative details of the movie hew closely to the facts, absolutely nothing about the film’s appearance…from automobiles to clothing to hairstyles to décor…ever gives the impression of taking place during the years 1947 to 1951. The look is completely late-1960s. In fact, one scene has Martha using a Princess Telephone (invented 9 years after her execution), and another places her in the kitchen with a 1968 wall calendar in view. What fascinates me about all this is that it matters not a whit. 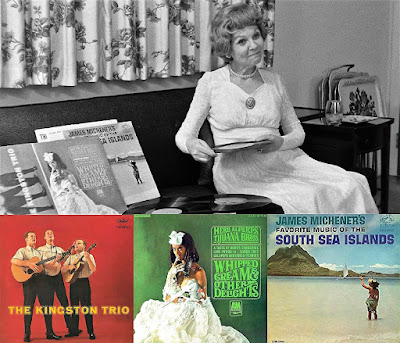 Martha's mother (played by actress Dortha Duckworth) plays DJ for visiting guest, Ray, the handsome "Latin from Manhattan" who traveled all the way to Alabama to meet (and wheedle money out of) Martha, his most recent Lonely Hearts pen-pal. The LPs lined up for the occasion are several era-specific favorites: The 1958 debut album by The Kingston Trio: Herb Alpert & the Tijuana Brass' ubiquitous 1965 album Whipped Cream & Other Delights, and epic novelist James A. Michener shares his Favorite Music of the South Sea Islands from 1965.
Who needs period detail when you have Oliver Wood’s exquisitely grimy, documentary-style B&W cinematography turning every frame into a gritty crime-scene snapshot straight out of a ‘60s issue of True Detective Magazine? I have a hunch that what was perhaps simply a consequence of the film’s prohibitively small budget wound up serendipitously granting The Honeymoon Killers the aura of an intentionally revisionist updating of the traditional ‘40s crime noir. Particularly the nihilistic, gritty, crime noirs like Detour (1945).
If it’s true (as historian Ryan Reft suggests in his 2017 essay When Film Noir Reflected an Uneasy America) that ‘40s film noir “…depicted a nation in which the American Dream was treated as a ‘bitter irony,’”; then it's therein that I find in The Honeymoon Killers' '60s look and cynical perspective, a seamless affinity. With its vivid merging of the stark, grainy look of documentary with the impressionistic lighting and stylized framing of film noir, the mood and atmosphere of The Honeymoon Killers resonate with me as reflective of American moral and spiritual ennui during the Vietnam era.
Although seen early in the film responding angrily to her mother referring to her as "My little girl," Martha is nonetheless frequently depicted in ways emphasizing her childishness. In scenes shared with Ray and his temporary wives, Martha behaves pretty much like an ill-tempered 200-lb toddler left in their charge. When not complaining, throwing a tantrum, or sulking petulantly, Martha's childlike inability to control her impulses extends to her sexual rapaciousness, her appetite for candy, and her homicidal possessiveness of Ray. A delusionally blinkered devotion fostered by the idealized depiction of adult relationships in her ever-present Romance magazines.
The Honeymoon Killers’ unpleasant characters, blunt violence, and air of austere ugliness is the purposeful attempt on the part of producer Warren Steibel and director-screenwriter Leonard Kastle to rebuke and repudiate the embroidered approach of “based on real events” crime movies like In Cold Blood (1967), Bonnie & Clyde (1967), and  Butch Cassidy & the Sundance Kid (1969):
“I wanted to do (this film)…in a form that didn’t sentimentalize or romanticize murder. I’ve always thought that the way people like this are represented, in Hollywood especially, is terrible. They are either made too evil, so that they are no longer human, or they are made too sweet, or, sometimes even beautiful.”    Leonard Kastle -  The News and Observer June 4, 1970 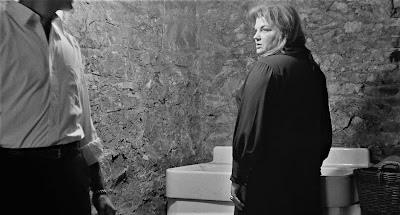 The Honeymoon Killers has much to recommend it and is one of those films that feels like it's far more violent than it actually is because of its bleak tone and pervasive air of dread. With each new Lonely Hearts encounter, I found my jaw clenching tighter and tighter. The assured performances of Shirley Stoler and Tony Lo Bianco are compellingly raw in their total disinterest in coming across as sympathetic or likable. I can't say enough good things about the intensely evocative cinematography, and I love the ingenious use of the music of Gustav Mahler on the soundtrack (goosebump-inducing!).
But had true crime exposé and sensationalism been the only things on the film’s mind, I’m not sure the movie would have held much appeal for me beyond morbid curiosity. But The Honeymoon Killers is anything but your typical crime film (a police presence is nowhere to be seen). A minor masterpiece of the macabre, it’s a contextually rich and narratively provocative film whose dire themes offer a trunkload of things to unpack. 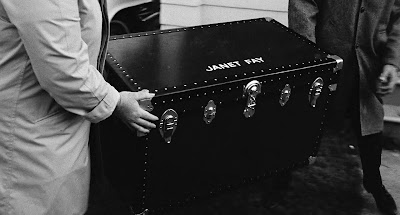 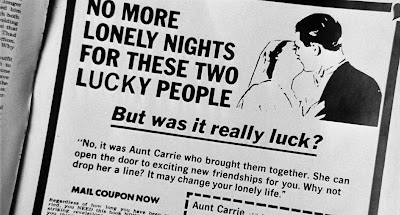 BONUS MATERIAL
The Beck/Fernandez "Lonely Hearts Killers" case has served as the inspiration for at least three other films that I know of. To date, the only one I've seen is the superb Deep Crimson (Profundo Carmesí) -1996 by Mexican director Arturo Ripstein. In 2006 Todd Robinson directed Jared Leto and Selma Hayek(!) in a more police investigation-centric retelling of the story titled Lonely Hearts. And Alleluia (2015) is a French/Belgian adaptation directed by Fabrice Du Welz that updates the story to a contemporary setting. 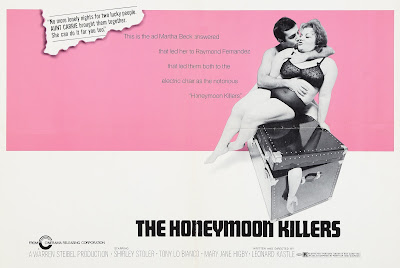